The first three championship matches are official for WrestleMania 38 with WWE Champion Brock Lesnar facing Universal Champion Roman Reigns while WWE’s top two Women’s Titles will be on the line as well.

Brock Lesnar captured the WWE Championship during Saturday’s Elimination Chamber Premium Live Event when he won an Elimination Chamber Match. The match saw WWE Champion Bobby Lashley defend against Lesnar, Seth “Freakin” Rollins, Riddle, AJ Styles and Austin Theory. Lashley was taken out of the match with a concussion after Seth Rollins gave Austin Theory into a pod that Lashley was standing in. Lashley was ruled ineligible to return at that point due to the concussion.

Lesnar was the fifth and final man to enter the Chamber. Lesnar would go on to eliminate Rollins, Riddle, Styles and Theory to become the WWE Champion. It is Lesnar’s tenth time holding a WWE World Title.

After Lesnar won the Royal Rumble match three weeks ago, he made it clear he would challenge Reigns for the Universal Title at WrestleMania 38 in Dallas, Texas on April 2nd or April 3rd (most likely April 3rd). Now that Lesnar has the WWE Title again, WWE is billing Reigns vs. Lesnar as “Champion vs. Champion.” It’s winner take all meaning whoever wins the Reigns-Lesnar match will be the WWE and Universal Champion. What happens after that is unknown at this point.

Lesnar is expected to appear on Monday’s Raw – the 1500th episode in Columbia, SC – according to PWInsider.

There are two more official title matches at WrestleMania. Women’s Royal Rumble winner Ronda Rousey is going to challenge Charlotte Flair for the Smackdown Women’s Title. That was already after Rousey declared her intentions on Smackdown earlier this month. 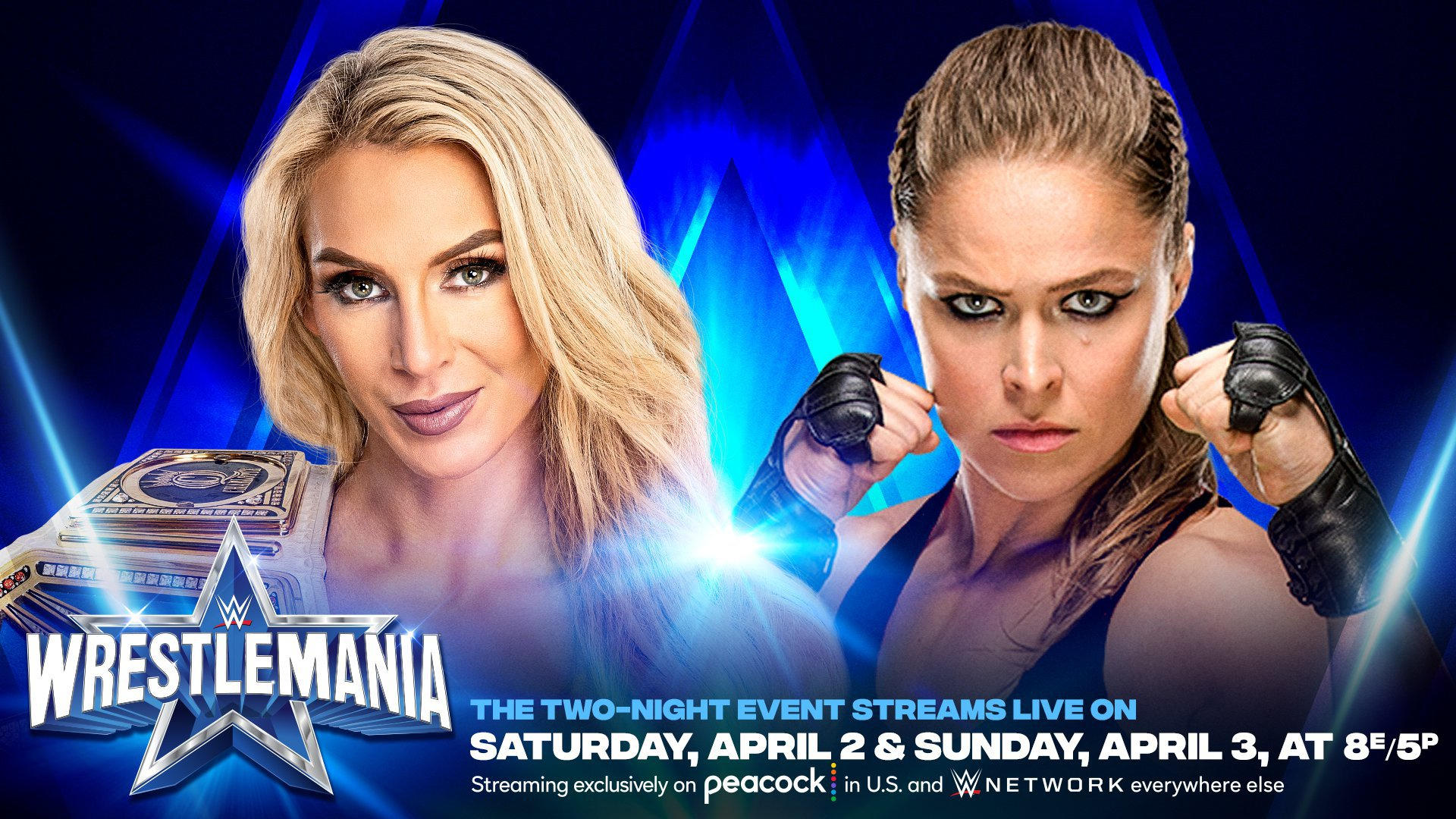 At Elimination Chamber, Rousey teamed with Naomi to beat Charlotte Flair and Sonya Deville. Rousey was forced to wrestle with her right arm tied behind her back, but she still managed to beat Deville with an armbar.

The Women’s Elimination Chamber match saw Bianca Belair enter the match in the sixth spot and she won the match by last eliminating Alexa Bliss. The win by Belair means that she will go on to challenge Becky Lynch for the Raw Women’s Championship.

The story between Lynch and Belair goes back to SummerSlam last year when Belair lost the Smackdown Women’s Title to Lynch in 26 seconds after Lynch was a surprise replacement for Sasha Banks. Since then, Belair had multiple rematches and both women were then drafted to Raw in October. Now Belair has a legit shot to beat Becky for one of the two top women’s titles in WWE.

Lynch had some friendly trash talk for Belair on Twitter.

WrestleMania 38 is a two-night event steaming LIVE on Saturday, April 2, and Sunday, April 3, beginning at 8 ET/5 PT on Peacock in the United States and on WWE Network everywhere else.

Eric Bischoff On What Ultimately Soured Him On Tony Khan

DDP On Not Getting Chance To Main Event WrestleMania