It seems like everybody is chiming in with an opinion of CM Punk lately and Kevin Nash isn’t one to shy away from giving his take while calling Punk a “bit of a prick” recently.

CM Punk is currently on the injured list after undergoing surgery for a torn triceps that will likely prevent Punk from any professional wrestling for the next seven or eight months. Punk was injured during his AEW World Title victory at All Out when he beat Jon Moxley to reclaim the title. After the match, Punk went on a rant at a press conference and got into a backstage fight against The Young Bucks & Kenny Omega with Ace Steel on Punk’s side. All of them are suspended for an undetermined amount of time. Even when Punk returns from injury, it is unknown if he will return to AEW.

Kevin Nash has a bit of a history with CM Punk going back to 2011 when he hit Punk with a Powerbomb at SummerSlam leading to Alberto Del Rio cashing in the Money in the Bank contract to leave with Punk’s WWE Title. Punk had a funny line in a promo to trash Nash by saying he got a text message from his sister saying “I thought he was dead lol” in reference to Nash being an older wrestler. They never did have a match although it was certainly teased. 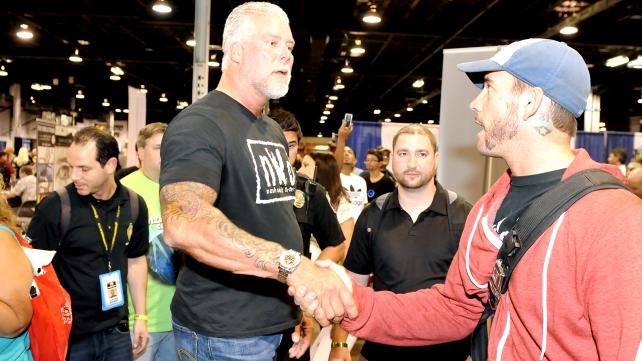 While speaking on his Kliq This podcast, the two-time WWE Hall of Famer Nash gave his take on the issues surrounding Punk.

“At 42 years old, you know, [Punk] is tired. He’s beat up … I was in the ring at 55 when he was cutting the promo on me, ‘Click, click. I can hear your knees. LOL, I thought you were dead.’ Yeah that motherf*cker cut that promo on me and he sits there at 42 years old … He’s f*cking got toxic shock syndrome … I Googled him, I said forty f*cking two, the dude didn’t wrestle for 10 f*cking years.”

“I watched [Punk] come back, I watched everything he did. He made sure he made everybody before he beat them, okay, he was a pro … His run got cut, you know, basically politically. He just had too much f*cking heat. Deserved … I see a lot of me in him. I’m not going to speak for him but he’s a little bit of a prick.”

Nash went on to discuss how a promo from “Hangman” Adam Page promo appeared to upset Punk while comparing it to the infamous “Sunny Days” line that Shawn Michaels to upset Bret Hart during their famous 1997 rivalry:

“I know that the Hangman … interview upset him. I think what happens when you start doing that worked-shoot sh*t because it’s not scripted, so you do get a ‘Sunny Days’ that can wreck somebody’s life at home … Now you’ve taken that step over the line where you’ve now put my relationship with my family into your f*cking bullsh*t on television, and now I want to beat your ass.”