It seems like the “Talk is Jericho” podcast hosted by Chris Jericho is the place to go for former WWE superstars to go to vent their frustrations from working for WWE. Names like Jon Moxley, Brodie Lee and Matt Hardy have done interviews with Jericho where they weren’t particularly happy with their WWE run. It doesn’t mean everybody is bitter about their WWE run because in a lot of cases, these wrestlers are happy to be gone. The former WWE Revival tag team of Scott Dawson and Dash Wilder are now known as The Revolt with Dawson using the name Dax Harwood and Wilder using the name Cash Wheeler. It was well known that they asked for their release from WWE in early 2019 and then they were finally granted their WWE release a few weeks ago, so it was over one year after they asked to be released from their contracts.

Here are some interview highlights with thanks to Reddit user miber3 for the quotes:

Dusty Rhodes being their biggest supporter:

Dax Harwood: “I think Dusty was our biggest supporter. He had the people that he believed in, and he knew it would take a while for us to get where – and where he wanted us to go – but he knew we could get there.

How they became close friends while being a tag team:

Cash Wheeler: “We meshed right off the bat because we both had so much respect for Bret Hart. That was like a litmus test for us. When we both said we chose Bret as one of our all-time favorites – especially Dax, who that’s his all-time favorite.”

Why they wanted to leave WWE when they asked for their release in January 2019:

Cash Wheeler: “Things were going decent for us, they’re going well all things considered, but we’re not happy. The tag titles don’t mean anything. I would rather lose to the tag champs for the rest of my career than hold them, because it’s just going to be seen as a failed championship run.”

Dax Harwood: “That was one of our biggest factors in leaving, was that tag team wrestling was featured everywhere else except for WWE and we wanted to be a part of that. We could sit back and, apart from our NXT stuff, we could have no legacy in wrestling or we could go out and make history.”

Being frustrated as a tag team like when Braun Strowman won the Tag Team Titles with a 10-year-old kid at WrestleMania:

Cash Wheeler: “This is nothing against Braun, but he steamrolled the entire tag team division. And then a ten-year-old won the titles at Wrestlemania. And then no tag teams were featured at Summerslam, and at the last minute they added the women’s tag titles, which I’m all for, but it was so last minute that people didn’t know.”

Believing that there would never be a big push for the tag team division:

Dax Harwood: “I think we knew, underneath it all, that there was never going to be a real push for real tag teams. For whatever reason, I don’t know what it is, but if you are in the tag team division and you’re two singles guys being thrown together, you’ve got a much better chance of being featured than you do if you’re a standard tag team that looked the same, that worked the same. We knew that there was never really going to be a big focus on the tag team division.”

They also talked about how if things changed for the better, they would have re-signed with WWE, but they didn’t feel like things improved, so that’s why they chose to leave.

Having fun on social media:

Cash Wheeler: “We make, what I think are funny comments on social media, because social media is not real. It’s character-based. My name is not really Cash Wheeler or Dash Wilder, so if I tweet or whatever from those accounts, most of the time I am either joking or I don’t want you to actually know the truth, because I think there’s so much excitement in fans not knowing the true story. I think there’s too much knowledge now-a-days, spread around, and I want to keep people out of the loop or guessing as much as humanly possible because I think that adds to it. I know, myself – as a fan – the less I knew the more excited I was when something happened. So if I say something online, 9 times out of 10, I am being 100% a sarcastic smart ass, because I enjoy it so much. Like, if I ever said anything about the company, online, it’s because I found it funny, not because I’m genuinely upset.”

Turning down WWE’s offer to stay for a lot of money:

Cash Wheeler: “The numbers that have been reported, the $750,000 for whatever years…the numbers went higher than that. They offered more than that, for us to do the clown, Cat in the Hat, Flavor Flav, clock stuff.”

Dax Harwood: “It was either one of two things: Vince came up with the greatest idea in the world, or, in his mind he was thinking ‘Okay, we’re going to embarrass these guys on the way out.’ I’m still not sure, because Vince is the greatest worker of them all.”

They also spoke about how they didn’t need a specific amount of money to have a good life and Dax talked to his grandma about it, which led to her giving him good advice. Dax has a wife and daughter while Wheeler doesn’t have any kids. The point they were making is that it wasn’t just about the money to them.

The outfits they were referencing were posted on Bodyslam.net recently and here’s what one of those outfits looked like: 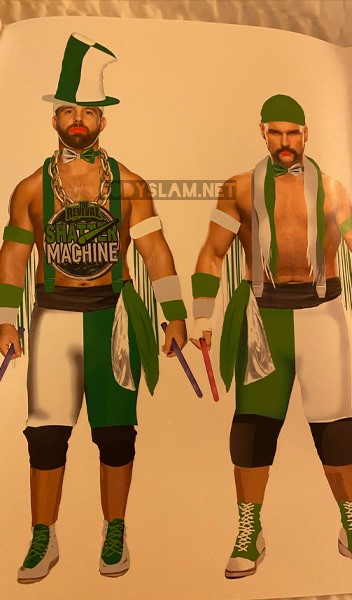 Those look ridiculous and it’s brutal to think that WWE wanted them to wear that.

The comments they received from Bret Hart after they got their release:

Dax Harwood: “Bret said how proud he was of [them], that they stood up for themselves and stood up for what they believed in. Because it would have been so easy to just sit back and collect the money. And when he sent me that text, I knew without any shadow of any kind of doubt that we had done the right thing. Because the guy who is the king of standing up for himself. I mean, he punched Vince right in the face [laughs].”

The “FTR” name that is associated with them:

Dax Harwood: “For so long, those guys – Matt and Nick (The Young Bucks) – they had been considered the best tag team in the world. And then we came along. These two 5’10” southerners from North Carolina came along and we started stealing the show on all the NXT shows, and I think it maybe put a little fear into those guys as far as, who’s the best in the world. But we had not talked to those guys, we had never met those guys, I don’t know if we have ever met them face-to-face, even now. It just came out of nowhere, and it kind of took us aback a little bit.”

Regarding their future in wrestling, they mentioned the possibility of working in other places like Impact, ROH, AEW, and New Japan. Some of the teams they mentioned wanting to work with were The North (Impact), The Briscoes (ROH), Guerillas of Destiny and FinJuice (New Japan), and then “on the top of the list, obviously, is the match that we’ve heard about since 2016 – that’s us and the Young Bucks” (AEW).

TJR Thoughts: I’m a fan of this team and wish them the best. I think they’ll be in AEW sooner or later, but I also expect them to be allowed to work in NJPW like Jericho and Moxley are. If they want to visit other companies first then that might be something they do too. I wish them the best in the future.