There was an interesting finish to a match on Raw this week with Seth Rollins and Murphy getting disqualified in a match against Rey Mysterio and Aleister Black. There was a spot in the match where Rollins, who was not the legal man for his team, grabbed Mysterio (the legal man on his team) while Rey was going for a 619 kick on Murphy and Rollins slammed him on the floor. That led to referee Chad Patton calling for the disqualification. Rollins sent Mysterio into the barricade as well.

It didn’t seem like a disqualification that WWE does all the time, but apparently it is some Vince McMahon rule that applies in that situation.

Here’s how it was explained by Bryan Alvarez on Wrestling Observer Live with thanks to wrestlingnewsco for transcribing it.

“However, outside of that 5 seconds if you are not the legal man, you cannot touch the other team’s legal man. Vince is adamant that this be enforced. If you are legal, you are allowed to hit the other team’s illegal man but the illegal man cannot touch the legal man. So Rey, because he’s legal, is allowed to hit Seth on the apron but Seth on the apron is not allowed to hit Rey. Seth can hit Aleister because they are both illegal. Legal can hit illegal but illegal cannot hit legal but illegal can hit illegal.”

“Vince is so adamant about this rule that when the wrestlers put together matches, there are spots that they want to do but the can’t because they will violate this rule. Even though I said all of that, you are still allowed to break up a pin. So illegal wrestler, as noted, can hit legal to break up the pin. If the illegal man tries to make a pin and the ref isn’t paying attention and the illegal man hits the illegal man, I think that’s a disqualification. If you are on the apron and you step inside and you punch the legal man, even though it has no bearing on the match, that’s a disqualification. But if someone is pinning your partner and you step in and break it up, which is a save, that is legal…That’s why last night Rey went for the 619 and Seth grabbed him and threw him on the floor and that was a disqualification. Because of this crazy rule.”

It’s a bit confusing, but there it is in writing. 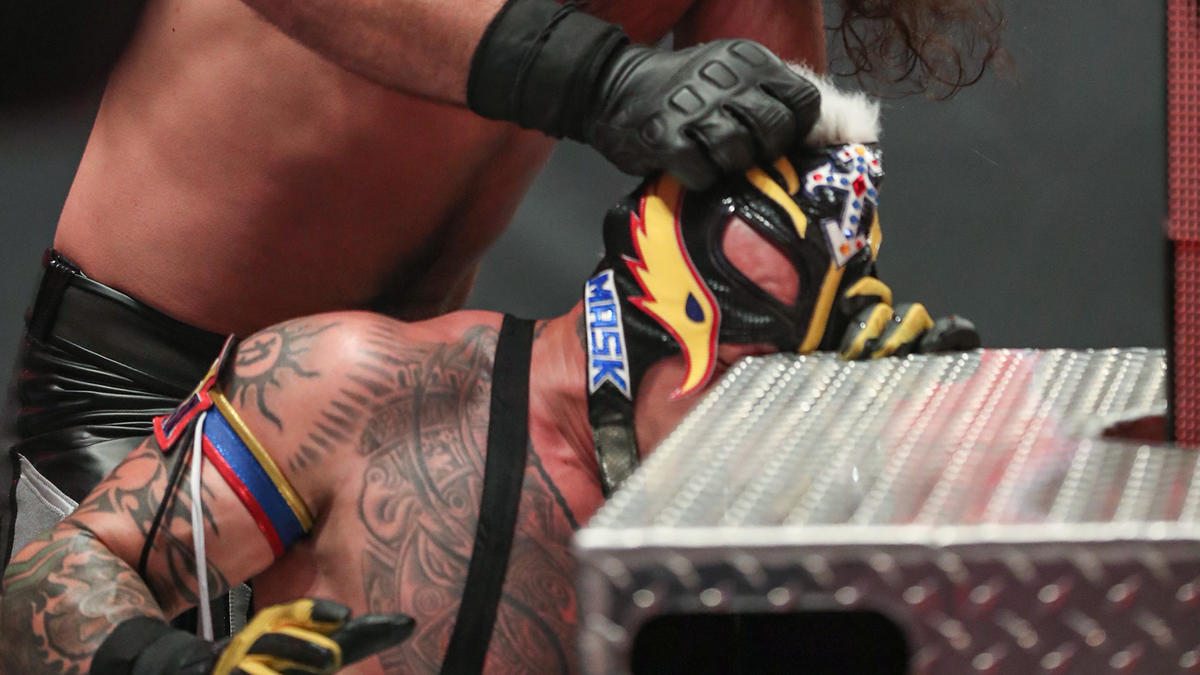 Rollins went on to attack Mysterio by driving his eye into the corner of the steel steps. Here’s how WWE.com explained it.

Rey Mysterio’s injury status is still listed as critical. Doctors cannot properly assess the damage to his retina until the swelling subsides, as Rey is currently at-risk for infection.

Mysterio suffered an eye injury when Seth Rollins grinded his face into the corner of the steel ring steps.

Stick with WWE’s digital and social platforms for more information on Mysterio’s status as it becomes available, and tune in to Raw every Monday at 8/7 C on USA.

It’s obviously just a storyline, but it’s a way to get heat on Rollins for injuring Mysterio. It should also lead to a match down the road with Mysterio seeking revenge on Rollins perhaps at WWE Backlash on June 14 or another pay-per-view in the future.