The full lineup for WWE WrestleMania 37 looks to be complete now with 14 matches set to take place on Saturday, April 10 and Sunday, April 11. Two more matches were made official last night during Raw involving the women’s tag team division.

The reason I said there might be more teams added to Tag Team Turmoil is that WWE accidentally tweeted this graphic that included Carmella & Billie Kay in the match. Here it is from Rajah.com since WWE has deleted it. 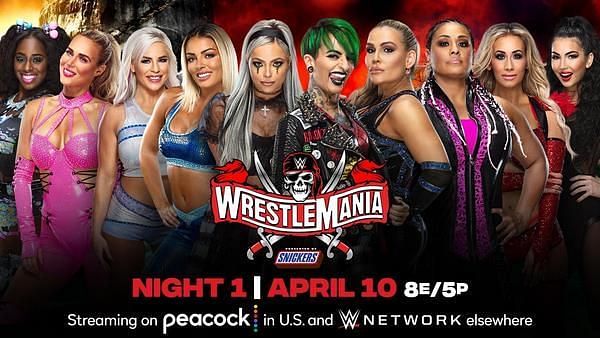 The addition of Carmella & Billie Kay was teased last week on Smackdown, so we might see it being made official on this week’s Smackdown, which has already been taped. It’s possible that Bayley and a tag team partner could be in the match too since Bayley isn’t advertised for WrestleMania yet, but we don’t know that right now.

The Wrestlevotes Twitter account noted that there was an original plan to do a Women’s Battle Royal at WrestleMania and then the two winners would team up for the Women’s Tag Team Title match. That’s something WWE did at WrestleMania 15 when D-Lo Brown and Test won a battle royal to get a title shot against champions Jeff Jarrett and Owen Hart.

Another change to the WrestleMania card is that Bad Bunny’s match against The Miz was changed to a tag team match that will now see Bad Bunny teaming up with Damian Priest vs. The Miz and John Morrison. I think a tag team match is the better move.

It’s also worth noting during last night’s Raw that announcer Tom Phillips repeatedly said that Bobby Lashley defending the WWE Title vs. Drew McIntyre was the “main event” of night one of WrestleMania. I assume that means they are going on last, but that hasn’t been confirmed.

It has also been reported that there will be no Kickoff Show matches at WrestleMania. The reason for that is because WWE wants to have the first wrestlers appearing in front of the crowd to be whoever is in the opening matches. The start time of WrestleMania is 8 pm ET as opposed to the usual 7 pm ET start time WWE has been using the last few years. They plan on running for 3 hours or up to 3 hours and 30 minutes on both nights.

Here’s what the WrestleMania 37 lineup looks like right now for Saturday, April 10 and Sunday, April 11.

This week’s Smackdown will also have two WrestleMania-like matches on it since they are calling it a WrestleMania edition of Smackdown.

The team of Dolph Ziggler and Robert Roode will defend the Smackdown Tag Team Titles in a Fatal 4-Way match vs. The Street Profits vs. Rey/Dominik Mysterio vs. Chad Gable & Otis.

There will also be the Men’s Andre the Giant Battle Royal featuring male superstars who are not involved in WrestleMania matches.