Here are the results of the matches that All Elite Wrestling taped during the “Chris Jericho Rock n Wrestling Rager at Sea: Part Deux” cruise yesterday. It took place on the cruise somewhere in the ocean near the Bahamas. They will air tonight on AEW Dynamite at 8pmET on TNT in the US, TSN2 in Canada, FiteTV worldwide and other places. The spoilers come from WrestlingObserver.com.

Here’s a tweet from the set from Wrestling Observer’s Bryan Alvarez, so you can see what it looked like.

The matches may air out of order based on how AEW wants to present it on TV, but most likely they will air in the following order that they were taped.

That’s the first title change on AEW Dynamite TV and AEW history. On Wrestling Observer Radio, they said the match was over 20 minutes long.

After the match, Baker was interviewed by Tony Schiavone and mocked him for working for Starbucks. Baker was really mean to him while putting over how smart and beautiful she was and the fans were furious.

It was mentioned on Wrestling Observer Radio that Jericho pinned Stunt. Luchasaurus went brawling to the back with Jake Hager of the Inner Circle group.

MJF defeated Janela with the Cross Rhodes that Cody Rhodes uses. Janela was distracted by Kip Sabian and Penelope Ford during the match.

Moxley wrestled the match with his head bandaged up due to the angle last week when Jericho spiked him in the head above his right eye. Moxley will challenge Chris Jericho for the AEW World TItle most likely on AEW Revolution on February 29th. Jericho was on commentary during the match.

The show ended with Jericho coming out after the match and he had a staredown with Moxley.

Here’s another image from the cruise set: 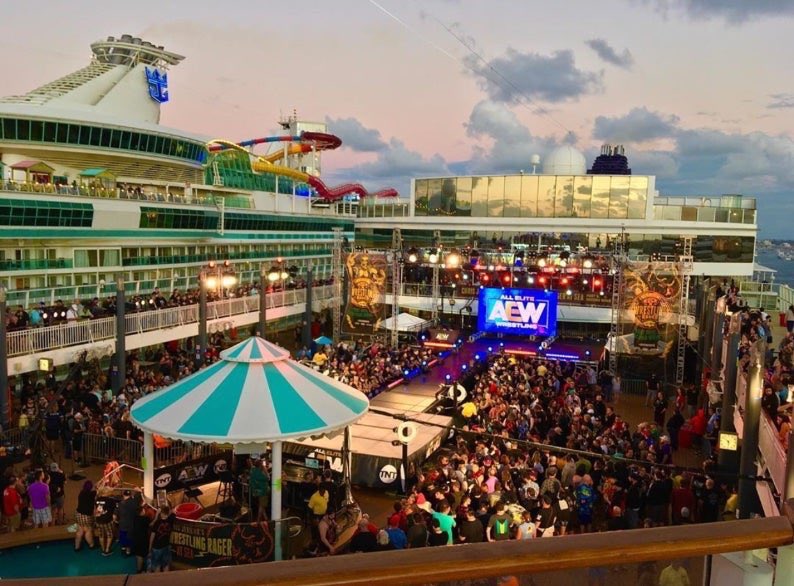 It was also announced by Cody Rhodes that next year they will air AEW Dynamite live on the Jericho cruise on February 3, 2021. That’s going to be interesting.