There was a big change to the WWE NXT brand in September 2021 and Shawn Michaels has shared how he felt about it at the time.

As the WWE Vice President of Talent Development, legendary wrestler Shawn Michaels is in the role of coach, teacher and mentor to WWE’s NXT roster along with those that haven’t debuted on television yet. It is up to Michaels and his team to teach them about pro wrestling, help them improve and watch them grow as television performers.

In September 2021, former WWE Chairman Vince McMahon and his team running the company at the time decided to change the black and gold version of NXT to rebrand it as NXT 2.0 with a more younger talent on the show in addition to the veteran wrestlers that were already on the show.

Anybody that watches NXT regularly over the last year has seen the development of young talent like Bron Breakker, Carmelo Hayes, The Creed Brothers, Cora Jade, Roxanne Perez, Tiffany Stratton and many more.

Michaels was recently a guest on WWE’s After The Bell Podcast hosted by Corey Graves and Vic Joseph, which led to the Heartbreak Kid recalling how he felt at the time.

“Obviously, it was abrupt, and it was not anything that I was technically, I guess, prepared to do. Now, again, obviously been mirroring Hunter for several years, I’ve obviously known, you know. Look I was going to the studio in Stamford when I was 28. You know, I mean, I was spending my days off up there. So I you know, hanging out with Bruce and Pat during, you know, writing and booking sessions I was in, you know, as in the studio with Kevin and Adam and those guys many, many years ago, I took an interest in the television side of things a long time ago. And so stepping into this was, you know, again, it was a comfortable and easy transition when I came here when we started, you know, doing live television on USA. Now running everything was a different you know, kind of responsibility. It was abrupt, but at the same time, that’s what I enjoy about the job.” 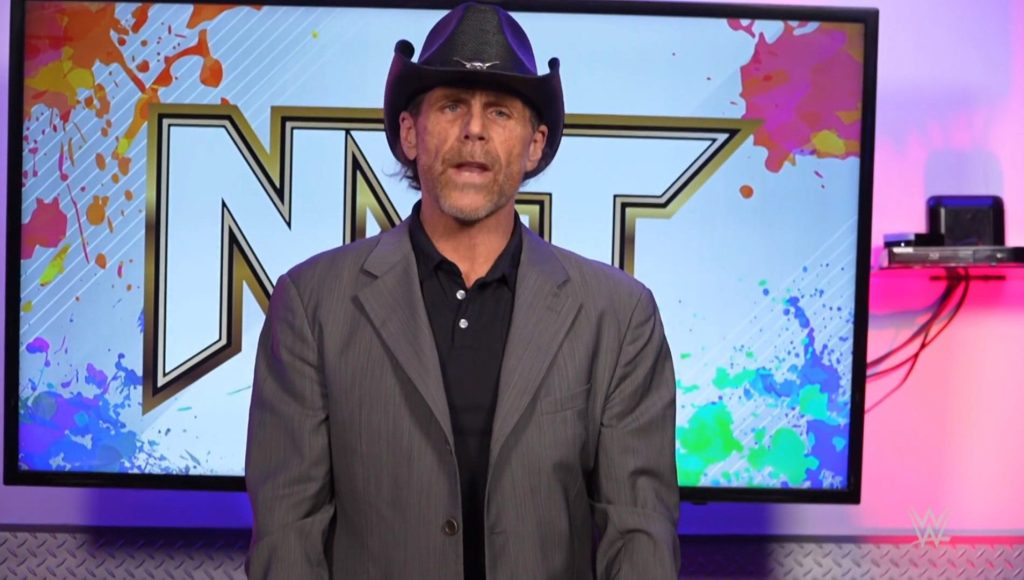 The two-time Hall of Famer Michaels went on to explain that when you’re in WWE, change happens all the time. An example of that is Triple H taking over Vince McMahon’s job as the Head of WWE Creative earlier this summer while the NXT brand went back to the black/gold and white colors while dropping the 2.0 name.

“As you guys know, you’re in WWE, things can change on a dime, and you have to learn to adjust to it, that’s what live television is. And that’s what life in the WWE is, something can change in a day and you have to be ready for it. So, look, I think the biggest thing that’s changed about NXT, that really changed, but it’s going back to its origin, you know, I mean, about being developmental about creating the superstars of tomorrow, for Raw and SmackDown. And look, there was I think there was a time that people felt like, and maybe we did, you know, kind of get away from that, but it wasn’t really, I don’t know, us getting away from it. You know, you think about the pandemic, and, and everything else, you know, it was hard to recruit, it’s hard to get younger talent, everything was kind of locked down. So we had to create, you know, a live television show with all of the people we had, and thankfully, we had a hell of a crew. But I think even the guys that have been in the business for 5 and 10 years when they got here, there’s still development going on.”

“Yeah, again, both of you know, you both have developed in your jobs, you know, Corey, you know, you’ve transitioned from one thing to another, you have never stopped developing in this job. And I feel like that’s even what my position was, which was, again, I’m a different form of developmental, so to speak. But it was, you know, again, going from a co-producer, a co-director, to the director, you know, what I mean, and the producer. So it’s all a developmental process, and I think that’s what we’re really getting back to, that’s the origin of NXT from the beginning. And that is really going out there and finding, I mean, now we’re finding raw, new talent. And I think that really hasn’t been done in NXT until now, when we’re talking about people that were in college last year.”

During his appearance on After The Bell, Michaels also spoke about the WWE recruitment process and how the company is going after people that don’t have wrestling experience, but they are still bringing in experienced wrestlers as well.

If you use any quotes from this transcription, please credit After The Bell and link back to this article with an h/t to TJRWrestling.