Seth “Freakin” Rollins has shared when he first learned about the big match he had at WrestleMania 38 when he faced a mystery opponent: Cody Rhodes.

There was no obvious match or opponent for Seth “Freakin” Rollins going into WrestleMania 38, which ended up turning into a storyline. Rollins tried to face AJ Styles, but that spot went to Edge. When Rollins attempted to take the spot of Kevin Owens in an interview with “Stone Cold” Steve Austin, Rollins failed to make that happen as well.

On the last episode of Raw prior to WrestleMania 38, former WWE Chairman & CEO Vince McMahon informed Rollins that not only would he be in a match at WrestleMania 38, but he would also be facing a mystery opponent.

During the first night of WrestleMania 38 on April 2nd at AT&T Stadium in Dallas, Rollins made his entrance and waited in the ring for his opponent. That’s when the music of Cody Rhodes hit leading to Cody’s official return to WWE after months of speculation. The two men went on to have a classic WrestleMania encounter that was won by Cody.

While appearing as a guest on Out of Character with Ryan Satin, Rollins spoke about how he learned that he would be facing Cody at WrestleMania earlier this year:

“I knew like, I would say, for sure, I would say less than a month out from Wrestlemania. I was really left out of WrestleMania. He ended up being a godsend. It was finalized like I want to say like three weeks before Wrestlemania. Even as we were starting to build the story towards that, it was not quite sure. There were conversations being had and all this stuff that I wasn’t really privy to.”

“I was kind of trying to poke around and be like, ‘Hey, is this going to happen or do I need to start thinking of something else because I’m really not interested in getting left off WrestleMania, two nights, and I don’t want to be thrown into a match that means nothing. Both the titles were being held up in the one match. I’m like, ‘I gotta have something here.’ I had been doing so much good work. I was doing great work.”

“If I was sucking, then yeah, I get it, but I’m not. I’m 35 at that time in my prime. I’m like, ‘I don’t know what else you want from me.’ I was like, this is awful. I had some really strong conversations, I’ll put it that way, with Vince leading up to that, but once we got rolling and everything was set in stone, like I said, I think it was like three weeks, four weeks, somewhere in that time frame where I finally texted Cody.” 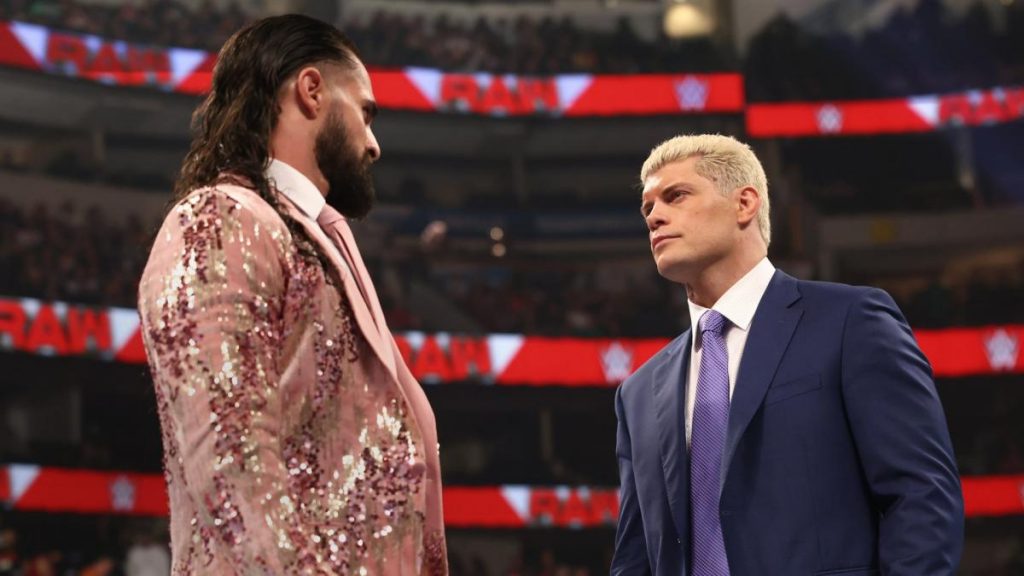 The rivalry between Rollins and Rhodes would continue with another great match at WrestleMania Backlash also won by Rhodes. The story continued from there leading to a final match at Hell in a Cell in June where Rhodes wrestled with a torn pectoral muscle (suffered while training) that led to visible scarring during the match. Rhodes beat Rollins for a third time in what was regarded as a potential match of the year. The next night on Raw, Rollins attacked Rhodes with a sledgehammer and it’s expected that Rhodes will likely miss most of the rest of the year.

Rollins recently picked up a big win at WWE Clash at the Castle when he defeated Matt Riddle by doing The Stomp off the middle rope for the pinfall win.