Samoa Joe has been seen publicly for the first time since he vacated the NXT Championship due to injuries.

Samoa Joe defeated Karrion Kross to capture the NXT Championship at TakeOver 36 in August. However, only three weeks later he was forced to vacate the title days before his first defence, which had been scheduled to take place on the debut of the newly overhauled NXT 2.0.

The ‘Samoan Submission Machine’ announced that he was relinquishing the title on Twitter, revealing that, due to undisclosed injuries, WWE’s medical team had advised him to step away from the ring for an indeterminate amount of time. He also warned any future champions that he would be back to collect what was his.

“Hello, I am NXT champion Samoa Joe. As part of my recent return, my goals were very simple. I sought to ensure the respect and integrity due to both NXT and its championship. I sought to ensure that everybody understood that the needs of one individual will never outstrip the sum of the brand.

Today, I find myself having to stand on those principles. Recently, WWE medical has informed me that due to certain injuries, they would like to have me step away for the ring for a brief, yet still indeterminate, amount of time. I realised that this week we are on the cusp of a new NXT, we are on the brink of a new era in our history and I realised that that era deserves a fighting champion.

That’s why it makes this a very difficult decision very easy to make. Effective immediately, I relinquish the NXT championship. Best of luck to those who will vie for it. My sincerest condolences to whoever wins because I will be along shortly to recollect what’s mine.”

Now, a new photograph of Samoa Joe has emerged showing him in the WWE Performance Center alongside new recruit Alema Collins, with Collins sharing the photo on Instagram. 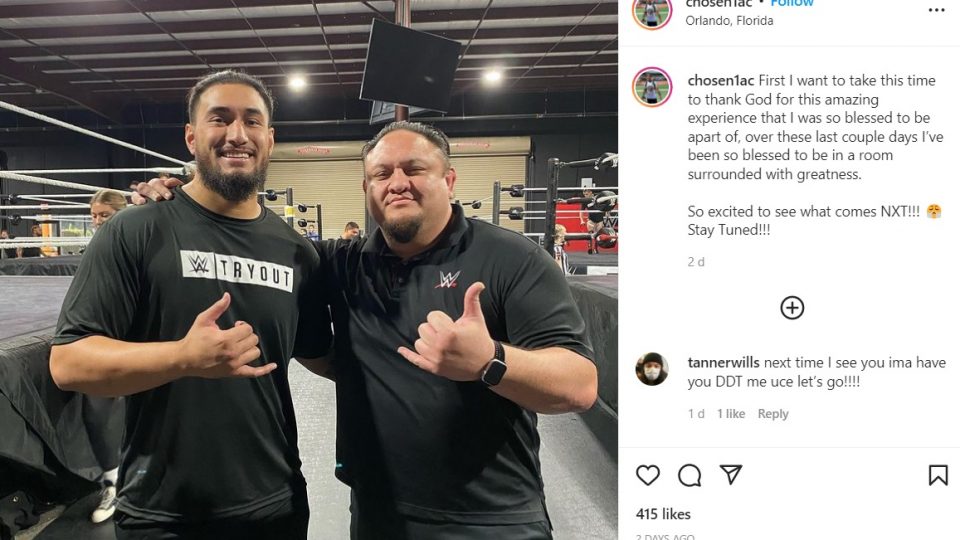 Collins is one of 15 new recruits to the Performance Centre, having been signed as part of WWE’s new NIL program. The 6’4″, 255lb trainee is a former defensive lineman for Arizona’s Ottawa University

WWE Announces Riddle Will Miss SummerSlam Due To Injury