Tonight’s episode of AEW Dynamite is a big one since they will feature the Blood & Guts match for most of the second hour. It’s a live broadcast this evening from Daily’s Place in Jacksonville. It’s also a show where AEW will have about 1500 fans or slightly more than that, which is about 40% of the capacity at Daily’s Place. That’s going to be their biggest crowd in over one year.

Here’s the lineup for AEW Dynamite tonight from AEW’s website:

*After 5 minutes, the 3rd man enters

*After that, every 2 minutes a new man enters

*The Pinnacle has the advantage

*Match can only end when all competitors have entered the cage

*Match can only end by submission or surrender

The winners will get their tag team title match next week as announced by AEW’s President Tony Khan.

TJR Thoughts: It’s a good lineup for sure. I think the Blood & Guts match is going to be amazing. I’m leaning towards a win for The Inner Circle in the B&G match because it makes sense to have the faces win after they were attacked to set up the match. However, The Pinnacle is a new entity that could use a big win, so it’s possible that they will win.

AEW Double or Nothing to Have Full Capacity Crowd 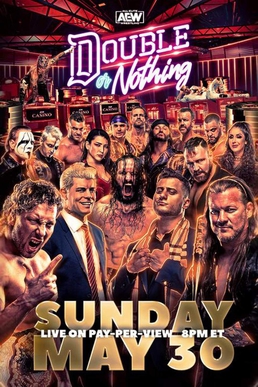 When AEW President/GM Tony Khan appeared on Busted Open Radio today, he said they expected to be at full capacity for the AEW Double or Nothing pay-per-view on Sunday, May 30. Currently, there are no matches announced for Double or Nothing likely because they wanted to wait until after the Blood & Guts show tonight. The plan is also to do AEW on TNT on Friday, May 28 (they are delayed that week due to NBA Playoffs) and then do an AEW fan festival-type event on the Saturday before Double or Nothing takes place on Sunday night.

The capacity crowd at Daily’s Place in Jacksonville for a wrestling show will likely be around 5,500 people depending on how the setup is and things like that.

Lastly, here’s the AEW Road to Blood & Guts that did a great job of promoting tonight’s big match.