Here are some news and notes on how WWE put together the Men’s and Women’s Money in the Bank Ladder Matches at last night Money in the Bank pay-per-view. Thanks to PWInsider’s Mike Johnson for the terrific information as always.

* The two Money in the Bank Ladder matches were filmed at WWE Headquarters (sometimes called Titan Towers) on Wednesday, April 15. There were other reports on other sites that it was taped in April, but no specific date was given that I saw. That date is before most of the wrestlers qualified for the match on television.

* The footage was shot like a TV or movie with a lot of different camera angles shot one after the other and then edited in post-production. There were also some pick-up shots from WWE to add to the final product that we saw at the PPV.

* WWE did not shoot the two Money in the Bank matches in the order that they appeared in the broadcast. The wrestlers did not fight their way up the building to make it to the roof. Different material was shot at different times such as in the gym, the lobby (when Asuka jumped on the other female wrestlers), the second and third floors, Vince McMahon’s office on the fourth floor and other parts of the building.

* Rey Mysterio and Aleister were tossed off the side of the building by King Corbin and there was no shot of where they landed. Johnson’s report noted that there was a crash pad set up on top of rows of cardboard boxes.

I posted the above picture of the landing spot in my Money in the Bank review because WWE showed a shot of the roof on the broadcast. The part that I circled in red is where Mysterio and Black landed. It’s not known how WWE is going to explain that on Raw or if they will even try to explain it.

* The Money in the Bank Conference Room is a legit room in WWE Headquarters. That was the spot where the women wrestlers were brawling and Dana Brooke grabbed a MITB briefcase that was in the room. According to the PWInsider report, that briefcase really hangs from the ceiling in that room and it was not a prop for the match. Obviously, Brooke was told to take it down for her spot that led to Carmella smashing a framed image on her head.

* There was a scene where former WWE Champions Daniel Bryan and AJ Styles went brawling into WWE Chairman Vince McMahon’s office. The spot where Bryan and Styles put their chairs back was because people in WWE know that if you are in Vince’s office, you must put your chair back in the position it was in before you sat in it. That must be one of Vince’s rules. Don’t sneeze near him either, pal.

* The T-Rex in Vince’s office is legitimately there all the time. Vince got that as a gift from son-in-law Triple H. It has also appeared in some WWE video games in the past and WWE has put it on display at public events like WWE Axxess during WrestleMania season.

* A janitor was shown in the building when the women’s wrestlers were fighting in a hallway as they chased after Asuka. Dana Brooke slipped on the floor and grabbed her head to have her sell as if she was knocked out. The jaintor was Kane Prichard, who is the son of WWE’s Bruce Prichard. Bruce was also featured in the filming of the match as he made an appearance in his Brother Love attire.

* Every floor in WWE Headquarters has a theme. The first floor is full of screens because that’s the WWE tech department. The second floor has a lot of pinball machines along with a design that makes it look like you are on a WWE stage looking at a ring. The fourth floor has the executive offices.

Thanks again to PWInsider for the info above.

It’s also worth noting that WWE was in the process of building a new WWE Headquarters in a different part of Stamford, Connecticut, but that’s been put on hold due to the Coronavirus. 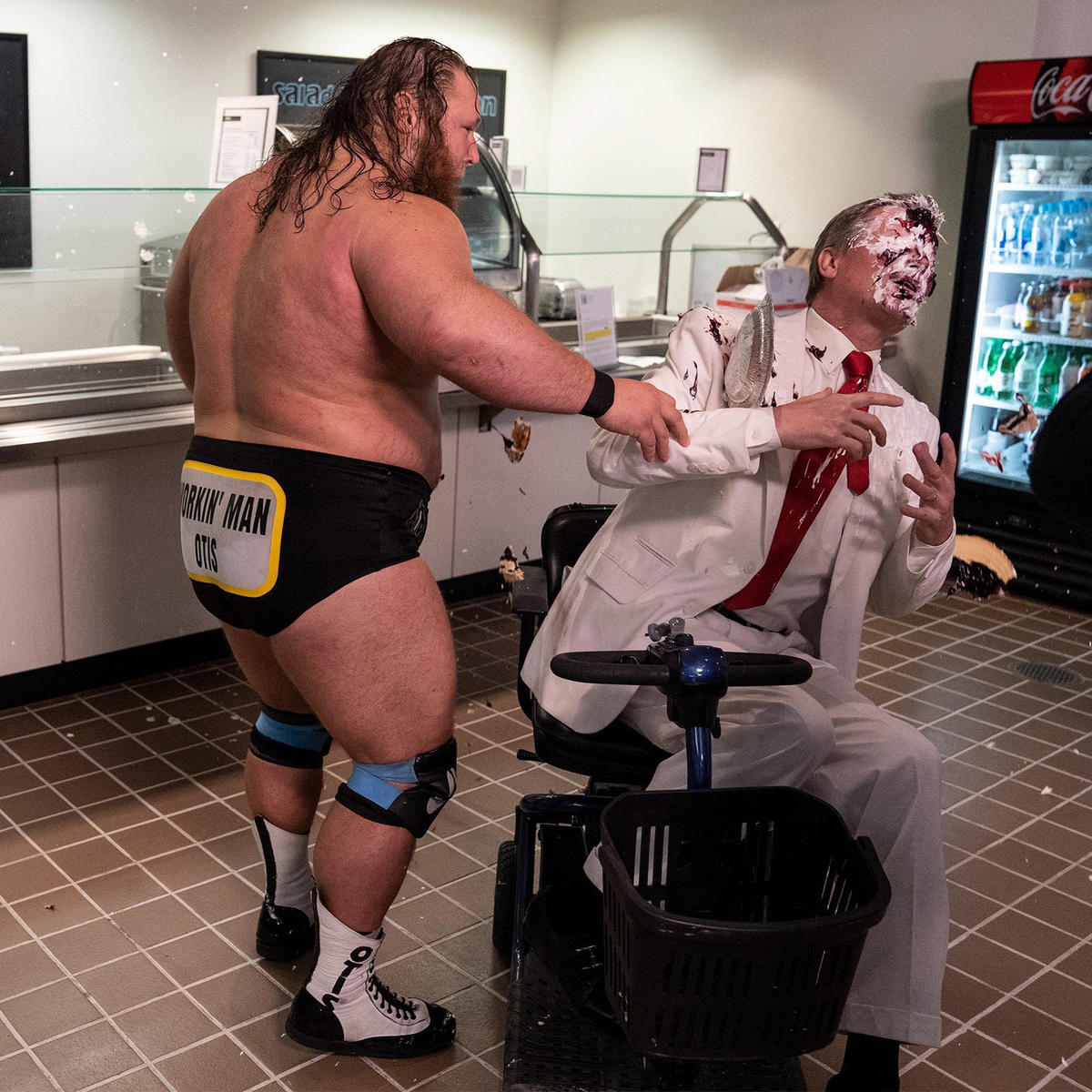 There were also several cameos during the Money in the Bank, which also played up the comedy aspect of the match.

* Brother Love was in the bathroom as Rey Mysterio ran by. When Brother Love said his “I love you” catchphrase, Mysterio said he loved him too, but he had to go. Brother Love is played by Bruce Prichard, who is the Executive Director of Smackdown these days, so he works in the office full time.

* There was somebody in a clown outfit. It was supposed to be Doink I guess, but it didn’t really look him, nor was the outfit the same.

* Stephanie McMahon appeared to tell Dana Brooke that she got the wrong Money in the Bank briefcase. You could tell that this was edited in because they didn’t show Stephanie and Dana at the same time.

* The Undertaker was not there, but AJ Styles was shaken when he saw an Undertaker-like casket in a room and Styles was knocked into the room by Aleister Black.

* Paul Heyman appeared at a catering table in the building looking ready to eat. Heyman is the Executive Director of Raw. However, when Heyman was ready to eat, the wrestlers showed up, Otis threw food at him and there was a big food fight.

* Otis was in the cafeteria where former Raw and Smackdown GM (in the 2011-12 days) John Laurinaitis appeared on a scooter-type device. Otis tossed a pie in his face. Laurinaitis is one of the top match Producers in WWE and likely played a part in putting the match together.

* Vince McMahon was in his office when Bryan and Styles got into a fight. They stopped when they noticed Vince. After Vince kicked them out of the office, Vince put some hand sanitizer on his hands, which is good advice for all of us during this current health crisis.

I’ll wrap it up here. Here’s a clip of the Asuka dive to start the women’s part of the match. Asuka ended up winning the match.