Former WWE lead writer Road Dogg has shared why the company decided to end the original version of their Talking Smack show.

The WWE Network show Talking Smack was a way for superstars to further storylines by giving interviews about whatever storyline they were involved with at the time. The show debuted on August 2, 2016 after the WWE draft split the rosters into two. Smackdown became “Smackdown Live” on Tuesday nights, which made it a live show for the first time since it was a taped show normally from August 1999 until the move to Tuesdays.

Renee Young and Daniel Bryan were normally hosts of Smackdown with Bryan in the role of Smackdown’s General Manager since he wasn’t able to wrestle at the time. One of the most memorable moments in Talking Smack history was when The Miz cut a passionate promo on Bryan after Bryan mentioned that people thought Miz was soft. Miz dared Bryan to hit him, but Bryan instead walked off. The moment was considered spectacular television (or WWE Network streaming as it were) and would lead to a match between them two years later when Bryan was able to wrestle again.

While WWE continues to do “Raw Talk” after Raw and the “Smackdown LowDown” after Smackdown, it doesn’t really create the same buzz as the original Talking Smack show in July 2017, which lasted nearly one year.

WWE Hall of Famer Road Dogg was the lead writer on Smackdown when the original version of Talking Smack was considered a popular show within the WWE Universe. However, Road Dogg explained on his Oh You Didn’t Know podcast that Talking Smack’s cancellation was a business decision and that the viewership was low.

“It simply was not worth it. It was a business decision where handling, shipping that big desk, you have to stay later, and so the people get paid for overtime. And you know what I mean? It’s logistically, it did not work, and it wasn’t doing great numbers, like people talk about it a lot, because it was really good.”

“Like it was really good, alternate content, where people got to express themselves sometimes a little differently than they did on the television show. And that’s the interesting part, that’s what makes it now like a cult following like, Oh, my God, that thing was great. Yeah, but none of you were watching it when it was on or else it would have stayed on, you know. It has to match the outgoing revenue, and then some hopefully. But yeah, it just didn’t do well.”

The former New Age Outlaw also referenced the famous Bryan-Miz segment for being a great segment because it was “all natural” and not rehearsed.

“And look, I will reiterate, I thought it was great, because it was a little bit off the cuff. It was a little bit of guys knowing what stories they were in, because we made sure of that and they wouldn’t go off, you know, out of bounds. But they would push it, they would push the limits and people liked that man, some of the best work I’ve ever seen Miz and Daniel Bryan do was literally off the cuff, not one word you know, rehearsed or any of that. That was all natural man, and have a real moment of what just happened there?”

“And so look, so few people were watching it at the time, it was like, well, we should do something about that. And Vince said about what? And it was like this thing that happened on [Talking Smack] and he said Oh, where you know, 40,000 people watched? You know, like, Oh, great. Yeah, we should really do something about that. And he’s right, you know what I mean? Like, he’s not wrong about that. It was [good], but it almost got cancelled as quick as it was getting hot.”

During the pandemic era of WWE, the company aired a different version of Talking Smack with Kayla Braxton hosting with Paul Heyman. That usually led to the same style of interviews and promo segments with Heyman doing a great job of interacting with the superstars. 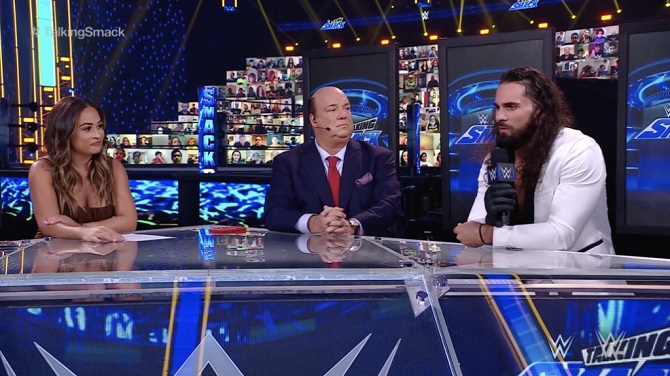 Road Dogg currently works for WWE as the Vice President of Live Events. Dogg will appear with D-Generation X on the October 10th episode of Monday Night Raw to celebrate 25 years of the Hall of Fame group.