The second night of WrestleMania 38 has come and gone and what an eventful night it was. Do I think it was up to par with the events of Night One? No. I never expected it to be. It was still a fun night.

Night one on Saturday, which I wrote about here, seemed to be more about the wrestling whereas night two felt more about the entertainment. You either like it or you don’t, but I thought the overall show lived up to expectations and exceeded them in most areas. I’ll get to that later. Here’s the John Canton review of both nights of WrestleMania in case you missed it. Here are five of my thoughts on the show. 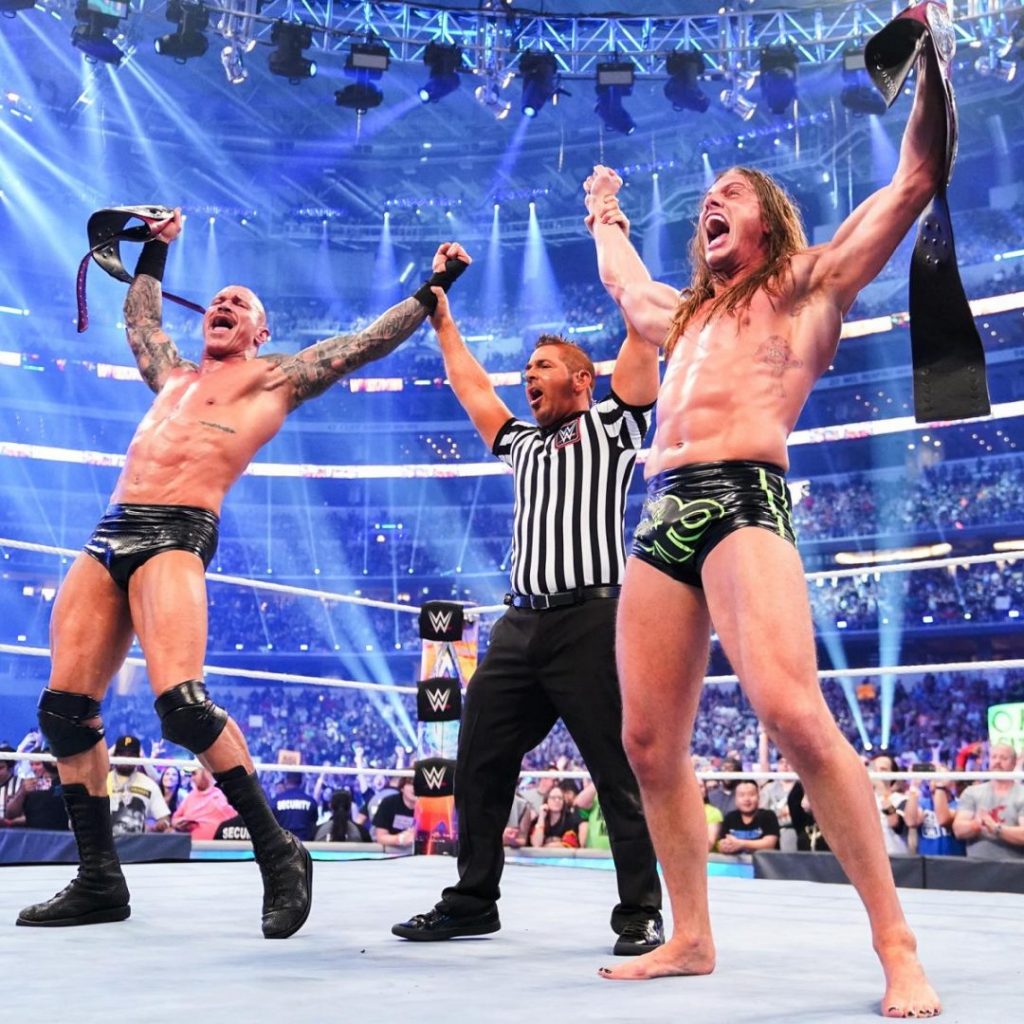 As expected, we opened with an awesome Tag Team Title match for the Raw brand between RK-Bro, The Street Profits, and Alpha Academy. It was a great match filled with greater spots. I don’t think it was as good as the triple threat match on Raw a few weeks ago with Seth Rollins and Kevin Owens instead of the Street Profits. Still, that was one of the best tag matches I’ve seen in months so I didn’t really put my expectations to that level.

The springboard RKO that Riddle did to Montez Ford was a thing of beauty followed by another mid-air RKO by Randy Orton to finish off Chad Gable. I thought it was brilliant and giving RK-Bro the win was the right call.

The Street Profits wanted to celebrate post match and everything in me from my 30 years as a WWE fan told me there was a heel turn coming. Once they called Gable Steveson in the ring, I figured it wasn’t happening. I do think we could see a heel turn for the Profits in the near future. It’s been teased a little bit over the last several weeks with the Street Profits using more heelish mannerisms in their matches. Post-match, Gable Steveson dispatched of Chad Gable. He hit a nice suplex. I think Steveson will catch on to the pro wrestling aspect of the business. He might need a little help in the character development portion or he might struggle on the Raw roster. I’m willing to give him a shot because he has all the tools to be successful. 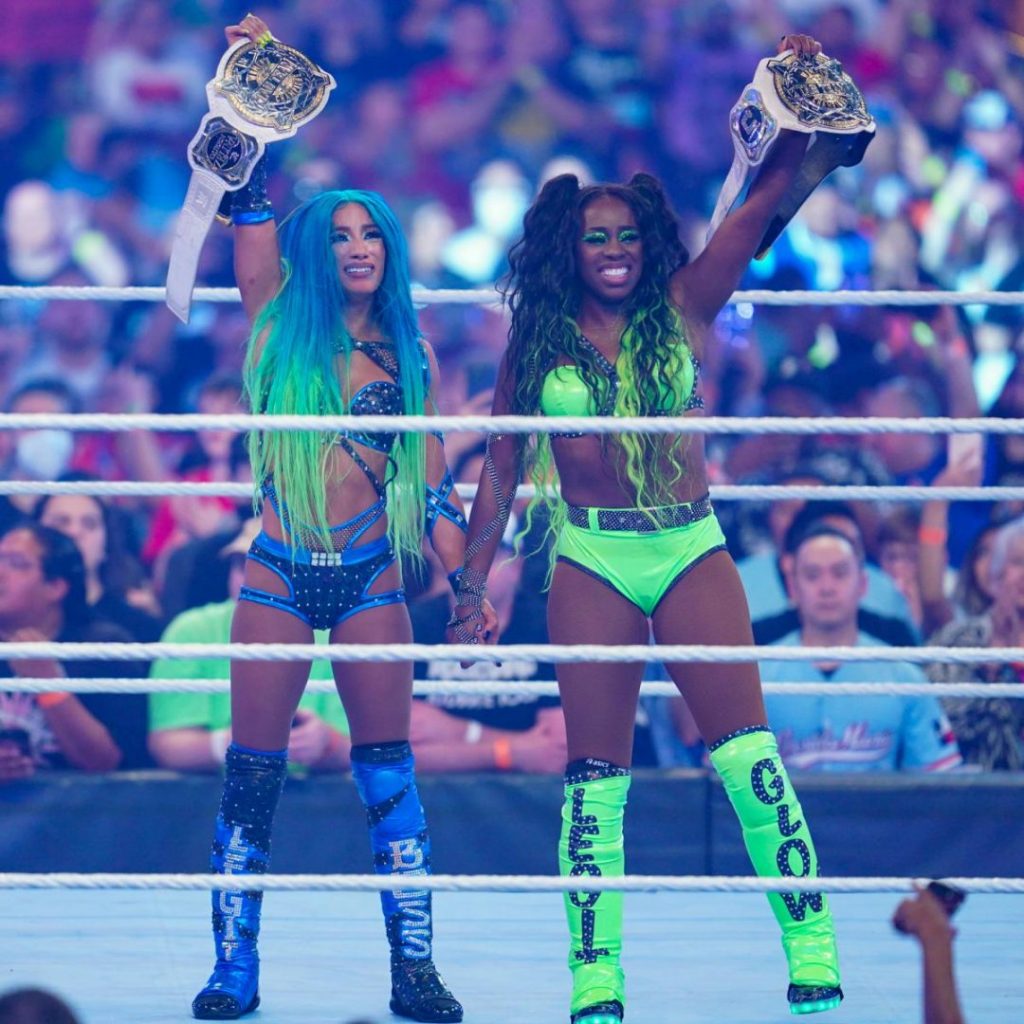 There was a Fatal 4-Way tag team match for the Women’s Tag Team Titles that saw the team of Sasha Banks and Naomi capture the Women’s Tag Team Titles. Sasha and Naomi were my picks since way back when they first reunited. I felt this was the only call. Naomi had been on positive momentum with fan support for months and Sasha is arguably the most over woman on the entire roster. Banks also had never won a WrestleMania match, so it was good to reward her for doing the favor for Bianca Belair last year.

The match was solid, but nothing spectacular. It was all about the moment. The emotion Sasha Banks and Naomi showed when they won those titles tells the entire story. They’re not really a thrown together tag team like most are. They have history and great chemistry and earned a well-deserved victory. 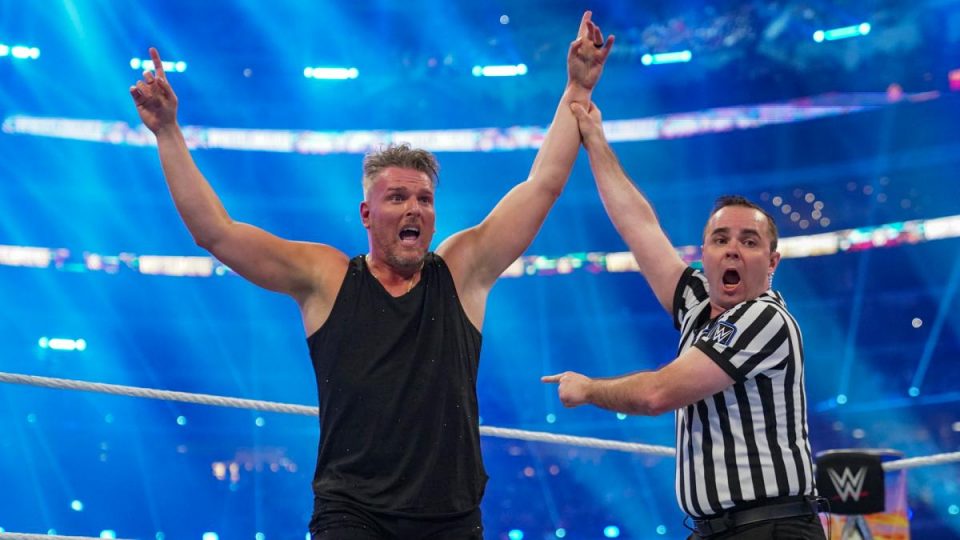 This was a treat. Pat McAfee and Austin Theory put on a hell of a match. I expected this much after seeing Pat’s matches with Adam Cole and Undisputed Era in NXT, but Theory brought it as well. Seeing Michael Cole’s hilarious mark out at everything Pat did, you could tell their friendship there. They’ve come a long way from Michael Cole yelling at Pat for wearing shorts on a WrestleMania kickoff show a few years ago. Pat McAfee picked up the win which I was a bit surprised about, but not unhappy.

The stuff after the match wasn’t needed. Vince McMahon pinning Pat McAfee was silly. I don’t think Pat cared. It took too long to get “Stone Cold” Steve Austin out there. I knew that’s what the end game was as soon as Vince stepped in the ring. I just feel like they did too much before he got out there. Other than that, a solid piece of business. I know Pat enjoyed himself. I’m sure Austin Theory did too. Theory has a bright future at only 24 years old. 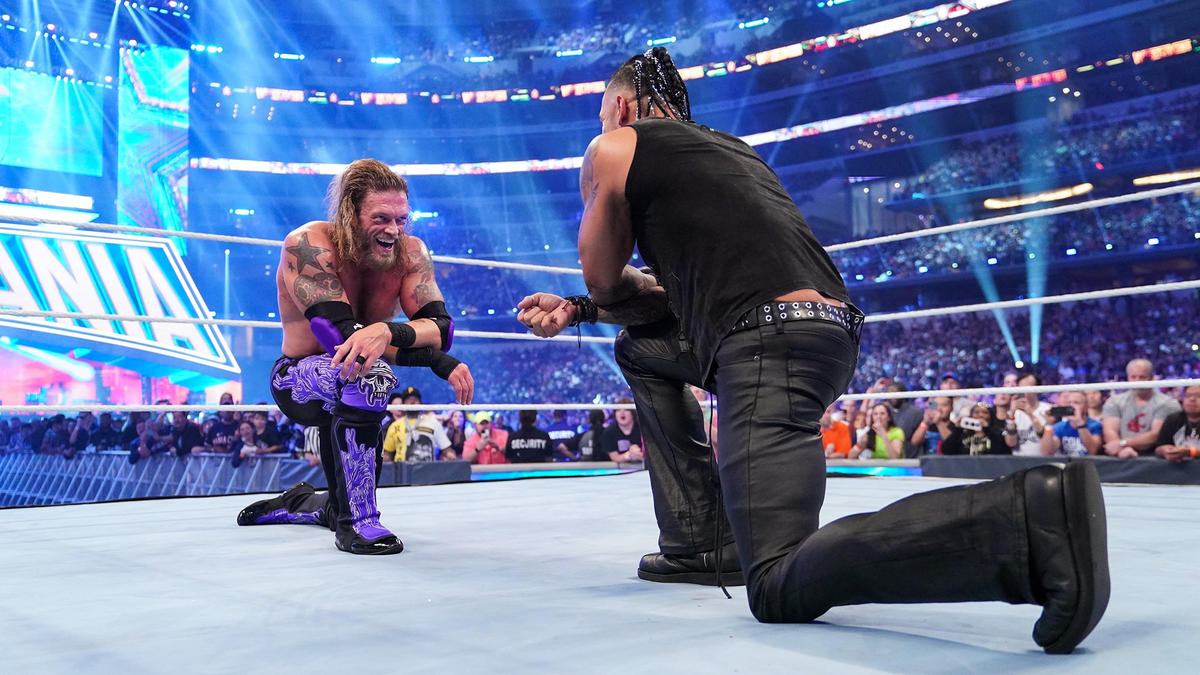 Edge and AJ Styles put on a banger like I suspected. It wasn’t the five-star classic that I know they’re capable of, but it was still great. Edge’s new music is quickly growing on me. I think it fits his heel persona perfectly. There were plenty of nearfalls. The end came when AJ Styles was setting up for the Phenomenal Forearm until he saw Damian Priest. That brief distraction allowed Edge to Spear AJ in mid-air and get the victory.

I love the edition of Damian Priest to Edge’s act. I’m sure there will be at least one or two more added. It’s good to give Edge a heel stable on Raw. It’s been so long since we had a true dominant heel stable on the main roster. I think Priest is a perfect choice and I can’t wait to see what’s next for them. 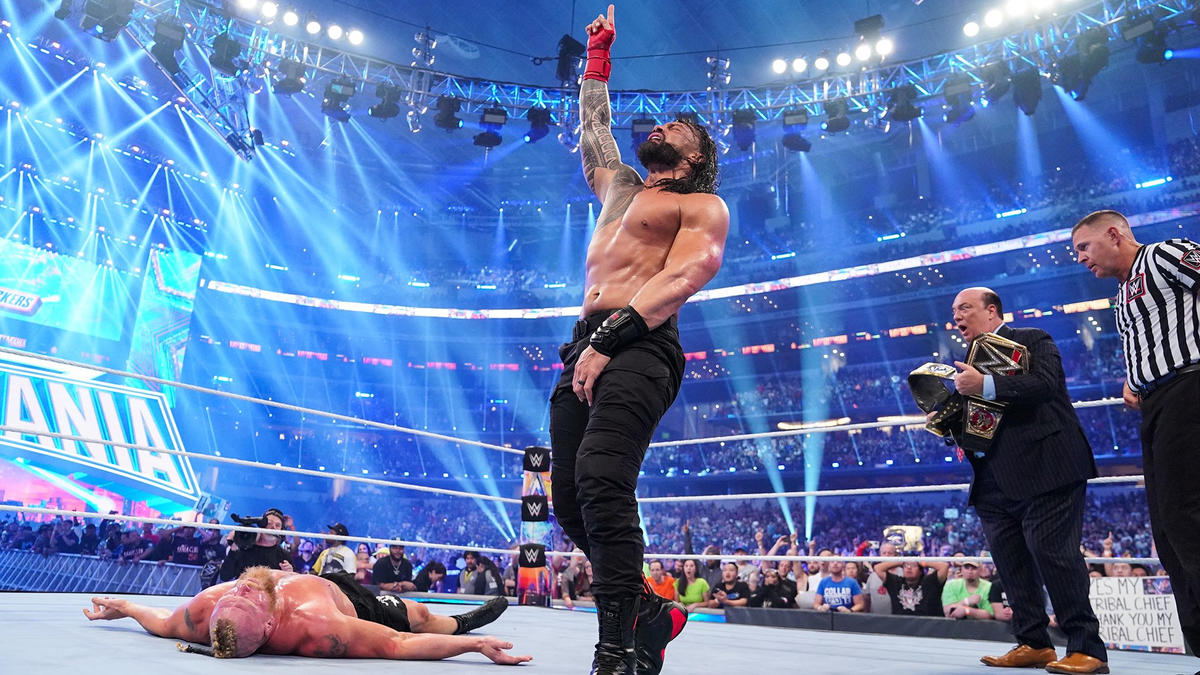 Roman Reigns defeated Brock Lesnar to become the Undisputed WWE Universal Champion. I thought the match was okay, but not at the level of some other Roman matches. It seemed as if he legitimately hurt his arm toward the end, which caused the match to end early after a Spear to Brock Lesnar. Now the question becomes, what happens next? I still don’t think Roman stays Undisputed Champion for long. Even in the post match celebration, he told Paul to hold the WWE Title because he wants to hold the “real one” which was the Universal Title.

I believe Roman will eventually say he doesn’t get paid enough to work two shows or he doesn’t want to work Raw so he’s going to give up the WWE Title. That will cause it to go vacant and whatever they decide to do to crown a new champion. Raw has a lot of talented wrestlers that could benefit from holding the WWE Title. I would be shocked if he is still holding both titles by the time Money in the Bank rolls around in July.

OTHER NOTES FROM BOTH NIGHTS

The Usos retained the Smackdown Tag Titles – I figured The Usos would retain here. Really sad news about Boogs getting injured. Hopefully he recovers better than ever. I think the Usos lose soon. This just wasn’t the right time for it.

The Miz and Logan Paul defeat The Mysterios – Highly impressed with Logan Paul. He may have been as good as Bad Bunny. He just gets it. Logan gets how to be a heel better than half the guys who have been doing this for years. Great job by The Miz in these situations.

Sheamus and Ridge Holland defeated The New Day– I’m happy with this one. Good job on the Big E-inspired gear by the New Day guys. It was too short. You could’ve cut anyone of those unnecessary video packages to fit more time on this one.

Johnny Knoxville defeated Sami Zayn – I hated Jackass as a kid. I never got it. That being said, this was some of the most hilarious pieces of business I’ve seen in years in WWE. Mark Henry and Mae Young’s son finally debuts when Sami gets laid out by a giant hand. It was harmless, but Sami was the perfect person for it. He is supremely underappreciated for just how great he is.

I thought Night Two was great. It was not as good as Night One but when you add both together, I’m sticking by my statement that this was a Top 10 WrestleMania.

There were returns like Cody Rhodes and Steve Austin, plus great wrestling and good celebrity usage. If I had to classify it, Night One was the Wrestling. Night Two was the Entertainment and I’m not upset with that at all. I also popped when Triple H came out. It was good seeing Hunter happy and healthy. He said “Welcome to WrestleMania” and left his boots in the ring, which is an old school tradition for retiring Wrestlers. I thought it was a great touch that he got to do that. Thank you Triple H for all the memories. 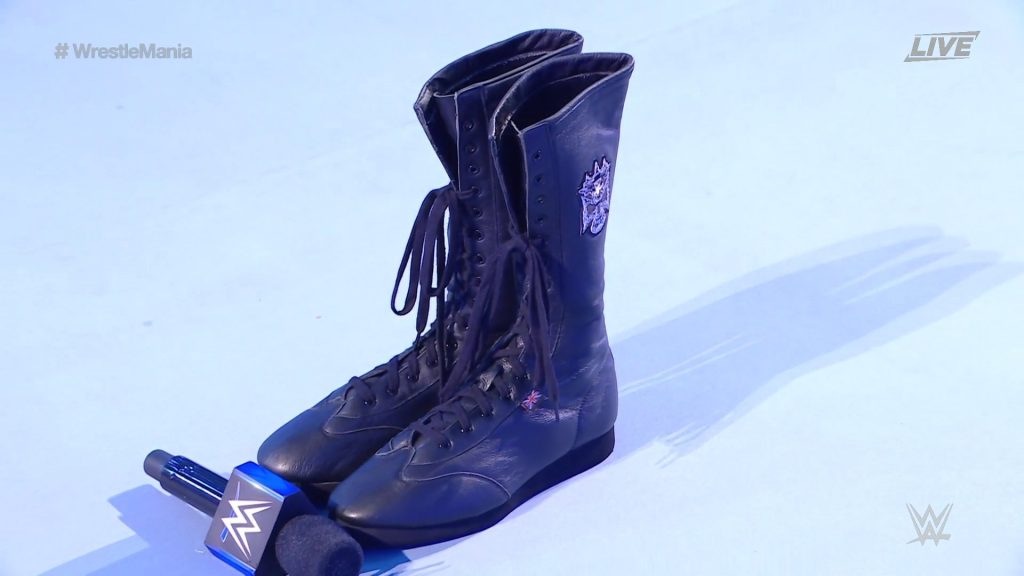