Welcome back TJR readers! Did you spend all day Friday playing the game, and missed WWE Smackdown. Perhaps you spent all Monday trying to book Chris Rock and Will Smith for WrestleMania, and missed Raw.

Tony Khan’s first venture as owner of ROH takes place tonight. ROH Super Card of Honor airs tonight at 8PM ET on FITE. Six matches have been announced including Swerve Strickland vs. Alex Zayne. ROH legend Jay Lethal will face Lee Moriarity. Josh Woods will defend the ROH Pure Championship against Wheeler Yuta. Mercedes Martinez and Willow Nightingale will battle for the Interim ROH Women’s Championship. The Briscoe Brothers will defend the ROH Tag Team Championships against FTR. Finally, Jonathan Gresham and Bandido will battle to determine the undisputed ROH World Champion. We shall have to see if ROH and Tony Khan can steal some of the headlines this weekend, even without making any major announcements. (ROH)

This past Wednesday’s AEW Dynamite featured the first qualifying match in The Owen Hart Foundation Women’s Tournament. The match saw a surprise debut from former NXT UK Women’s Champion Toni Storm. Storm was able to defeat The Bunny, to qualify for the tournament. The finals of both the Men’s and Women’s Owen Hart Foundation Tournaments will be held at the AEW Double or Nothing PPV on Sunday, May 29th. Dr. Martha Hart will be live at Double Or Nothing to present the winners with their trophy, known as “The Owen Cup.” We shall see if Storm can make it to the finals, or if she will have to wait for Tony Khan to hold a tournament on AEW Dark. (TJRWrestling)

WWE and NBC Universal are furthering their relationship together. This week it was announced that NBCU and WWE will be producing a fictional wrestling drama titled “Pinned”. Pinned is described as an “adrenalized upstairs-downstairs soap that gives a behind-the-scenes look at a fictional wrestling promotion and the unforgettable characters that populate it.” It will be interesting to see which, if any, WWE superstars appear on the show, and if the full-time actors will be upset that the non-acting wrestlers took their spot. (Deadline)

7. NXT Stand and Deliver to Take Place This Saturday

Just a few hours before Night One of WrestleMania 38, NXT will air a special event of their own. NXT Stand and Deliver is scheduled to air at 1PM ET on Saturday, and feature seven matches. LA Knight will try to overcome the dominant Gunther. Tommaso Ciampa will wrestle his last match for NXT against Tony D’Angelo. Toxic Attraction (Gigi Dolin and Jacy Jayne) will defend the NXT Women’s Tag Team Championships against Raquel Gonzalez and Dakota Kai. Carmelo Hayes will defend the NXT North American Championship in a Fatal Five-Way Ladder Match against Santos Escobar, Solo Sikoa, Grayson Waller and Cameron Grimes. Mandy Rose will defend the NXT Women’s Championship against Cora Jade, Io Shirai and Kay Lee Ray in a Fatal Four-Way Match. Finally, Dolph Ziggler will defend the NXT World Championship against former champion Bron Breakker. Seven plus hours of wrestling in one day may seem excessive, but hey it beats the alternative of spending time with your family. (Check out the John Canton preview here!) 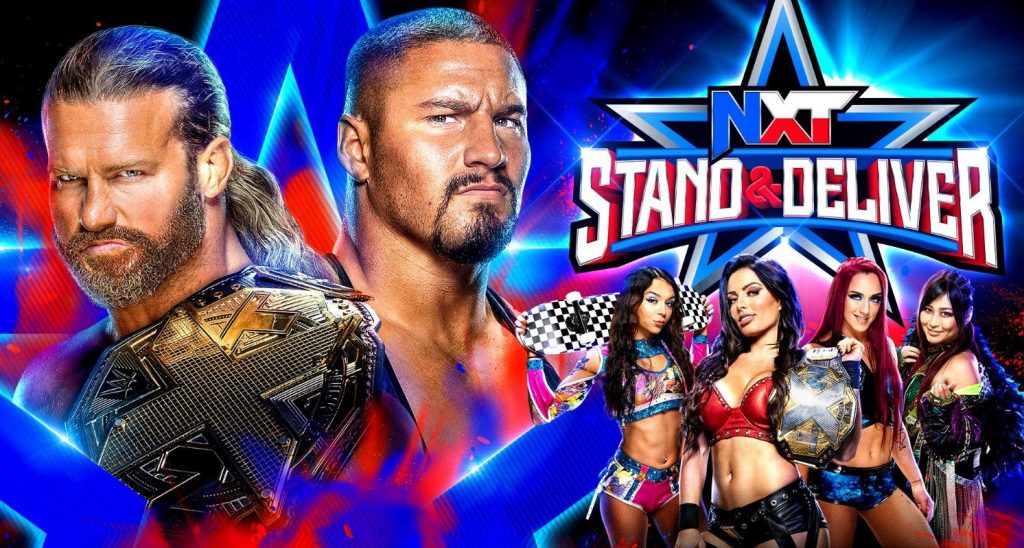 Some things are truly better late than never. This week, WWE announced that Shad Gaspard would receive the 2022 Warrior Award at this year’s Hall of Fame Ceremony. Gaspard tragically passed away in May of 2020, while swimming with his 10-year-old son Aryeh in the ocean in Venice Beach, California. Lifeguards were able to save Shad’s son when Shad urged them on to do so, but they were unable to find Shad. Shad was tragically found dead later, at the age of 39. Many thought that Shad should have received this award at last year’s ceremony when it was given to long-time WWE employee Rich Hering instead. Some have even petitioned to rename the award after Gaspard, although just like the Ultimate Warrior that petition has seemed to gas out pretty quickly. (TJRWrestling)

Bobby Lashley will be competing at WrestleMania 38 after all! This past Monday on Raw, Omos dominated both the Viking Raiders in less than a minute. After the match, Omos was interviewed in the ring, when suddenly Bobby Lashley returned to confront him. Lashley and Omos then got physical with each other with Lashley managing to knock Omos out of the ring. That led to both of them pointing to the WrestleMania sign. Lashley has not been seen since Elimination Chamber in February and was reportedly dealing with a shoulder injury. Clearly, however, Lashley and the WWE feel that his shoulder is now well enough to carry Omos in a WrestleMania match. (TJRWrestling)

4. Steiner Brothers to be Inducted Into the WWE Hall of Fame

The math was finally right to put the Steiner Brothers into the Hall of Fame. This week it was announced that both Rick and Scott Steiner would be inducted into the 2022 WWE Hall of Fame Class. The Steiner Bros are considered to be one of the greatest tag teams in history, holding the WCW Tag Team Championships seven times as well as the WWE Tag Team Championships twice. Both Rick and Scott both also had successful singles careers, with Scott Steiner winning the WCW World Championship in 2000. Rick Steiner’s son Bron Breakker is also main eventing in NXT. The Steiner Brothers may have gone into the Hall of Fame years ago, if it was not for some discouraging remarks that Scott Steiner made about the WWE, Triple H and Stephanie McMahon. Luckily recently, however, Scott has learned to keep Stephanie’s name out of his F’ing mouth. (TJRWrestling)

The last game has officially been played in the WWE. A week ago, Triple H appeared on First Take with Stephen A. Smith, and announced his official retirement from wrestling. This past September, Triple H suffered a cardiac event, that almost cost the WWE Hall of Famer his life. Due to this event, Triple H had to have a defibrillator fitted to his heart, causing his days as an in-ring competitor to be over. Triple H is a former 14-time WWE World Champion, who was a main event performer for almost 20 years. It is unknown what Triple H will do with his shovel now that he is retired, but it is rumored that he may gift it to Booker T. (TJRWrestling)

The biggest wrestling event of the year will be held over two nights this year. Night One will take place this Saturday, and will feature seven matches as well as a talk show segment. The New Day (Kofi Kingston & Xavier Woods) will face Sheamus & Ridge Holland (w/Butch) in a tag team match. Drew McIntyre and Happy Corbin will look to finally end their feud. Rey & Dominik Mysterio will look to get revenge on The Miz & Logan Paul. The Usos will defend the Smackdown Tag Team Championships against Rick Boogs & Shinsuke Nakamura. Becky Lynch will defend the Smackdown Women’s Championship against Bianca Belair. Seth Rollins will have a match against a mystery opponent, which likely will be a certain “American Nightmare”. Ronda Rousey will try to capture the Raw Women’s Championship against Charlotte Flair. Finally, “Stone Cold” Steve Austin will appear on the KO Show with Kevin Owens. It is rumored that the KO show will close Night One, with it being likely that Kevin Owens will end up having even a worse night of hosting than Chris Rock. 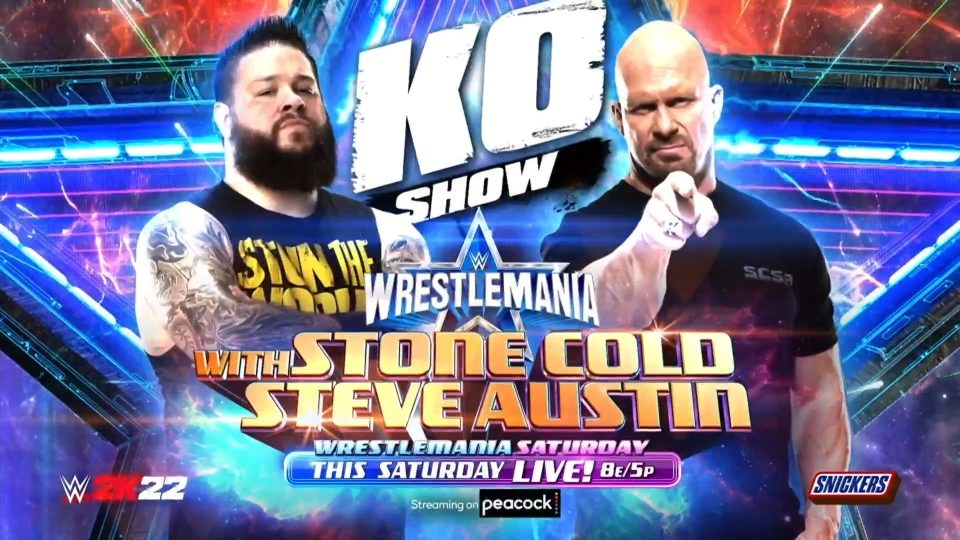 WWE’s biggest weekend of the year will continue this Sunday with Night Two. Night Two will feature seven matches including Smackdown announcer Pat McAfee facing Austin Theory. There will be a fatal four-way match for the Women’s Tag Team Championships between champions Carmella and Zelina Vega vs. Sasha Banks & Naomi vs. Rhea Ripley & Liv Morgan vs. Natalya & Shayna Baszler. The returning Bobby Lashley will try to defeat the dominant Omos. Sami Zayn will face Johnny Knoxville in an Anything Goes Match. AJ Styles will try to get revenge on Edge. RK-Bro (Riddle and Randy Orton) will defend the Raw Tag Team Championships against The Street Profits (Angelo Dawkins and Montez Ford) and Alpha Academy (Otis and Chad Gable). Finally, in the main event, WWE Champion Brock Lesnar will face WWE Universal Champion Roman Reigns in a Title Unification Bout. This promises to be a long and action-packed weekend of wrestling (including Smackdown/Hall of Fame tonight and a big Raw on Monday), that will likely leave John Canton so tired that he would even turn down Mandy Rose. (TJRWrestling) 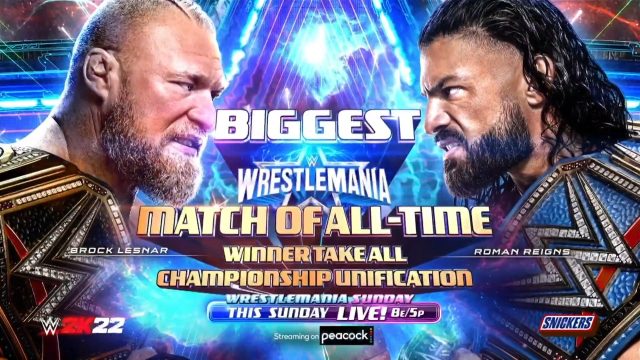 By the way, the main pic used here is from the WrestleMania 38 set reveal that WWE posted. You can watch it below.

That concludes another edition of The Top Ten Wrestling Stories of the Week. Thank you for taking the time to read this each week. Although I often joke, I have recently started refereeing with NYCW and respect more than ever what wrestlers do every week. I wrote an article all about it all right here. If you like what I do, despite my jokes being almost as bad as a GI Jane joke, then follow me on Twitter @Fowlerwrestlin1.