It was WrestleMania 20 from Madison Square Garden in New York City. This is a match where the WWE Title was on the line as Eddie Guerrero defended the gold against Kurt Angle. 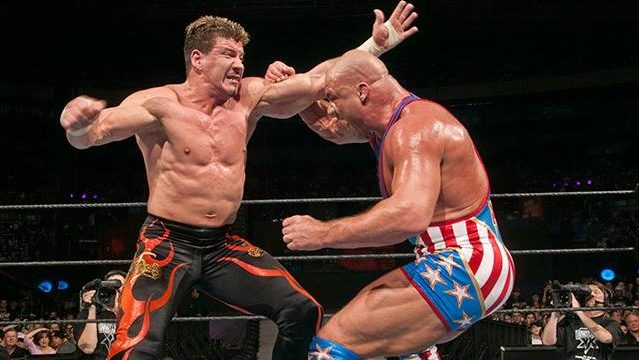 Since Eddie had just won the WWE Title, the expectation was that he was going to keep the title. The feeling was that having a great match with Angle and beating him would go a long way to help Eddie’s credibility as a new WWE Champion. Since Angle had been a multiple-time champion heading into this match, he was the perfect guy to put over Eddie the right way. 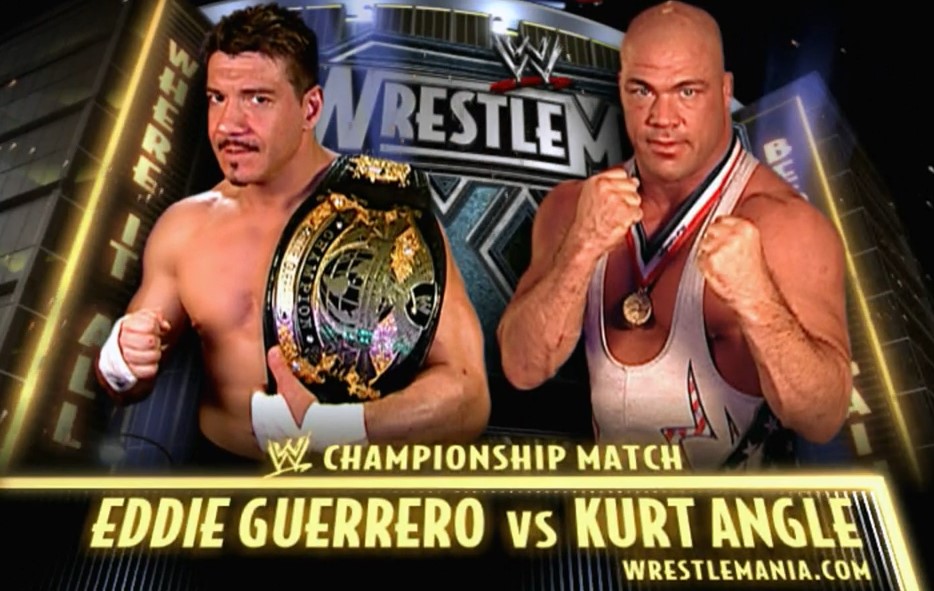 Angle went for the top rope suplex, but Eddie shoved him off and went for a Frog Splash. Angle moved out of the way, so Eddie hurt his ribs some more. It turned into a bit of a slug fest with Eddie getting some momentum. Eddie hit a back suplex for two. Angle hit a German suplex, but Eddie countered another one by countering into a rollup for two. The crowd wasn’t as loud as they would have liked, I’m sure. It was quiet for much of it. Angle went for an Angle Slam, but Eddie countered with an arm drag and a headscissors takedown. Eddie hit two suplexes, but Angle countered it into an Ankle Lock. Eddie countered it and then hit a dropkick. Eddie went up top. Angle popped up and hit his awesome pop up suplex for two. I loved that move so damn much. Another Ankle Lock attempt, but Eddie turned it into a cradle for two. German suplex by Angle again. Angle Slam countered into a DDT by Eddie was a phenomenal move. It was probably the best counter of the Angle Slam that I had ever seen because of how fluid it was. Frog Splash by Eddie got only two to the shock of the crowd. 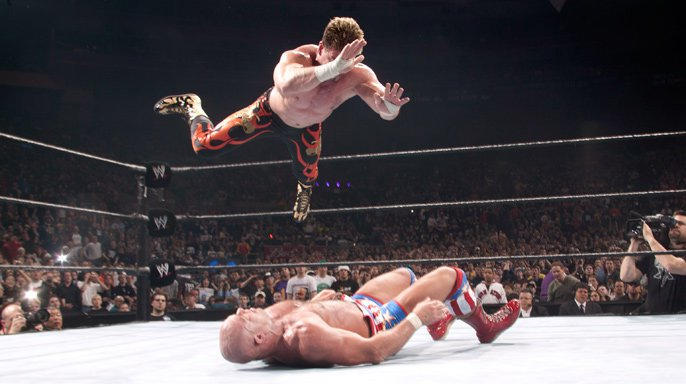 Everybody thought that was it. Angle played dead and then jumped on him with another Ankle Lock. Thirty seconds later, Eddie kicked him to the floor. The crowd thought that was it. Eddie started to untie the boot while Angle was on the floor. The beauty of it was that Angle was on the floor, so he never saw Eddie untying the boot. Angle was pissed, Eddie gave an “oh shit” expression on his face and Kurt attacked with an Ankle Lock. This time Eddie kicked at Angle’s arm until he yanked off the boot. Eddie got a tight inside cradle for the win, allowing him to retain the title at 21:30.

Analysis: ****1/4 The first five minutes of the match were slow, I must say. Things picked up the moment Guerrero went rib first into the railing in a Randy Savage style bump. I liked that. It would have been nice to see Guerrero go on offense a bit more than what he did because it really came off like Guerrero wasn’t doing much. His selling was great, though, so it’s not a big gripe. It also made sense that the Frog Splash only got two since Angle wasn’t hurt that much. The finish was fun and creative. Angle was relentless in going for the Ankle Lock, Eddie sensed that so he ended up using that to his advantage by outsmarting Angle at the end leading to the boot trick and cradle for the win. This wasn’t a match full of highspots or anything like that, but it was full of good straight up wrestling from two of the best. As good as it was, I thought it had the potential to be a five-star match if it was worked a different too. Far too many rest holds for that to happen, though. Believe me, I’m not complaining that much. I’m just saying I had high hopes for guys the caliber of these two. Maybe those high hopes were unrealistic on my part, but I know what they were capable of.

I still love this match a lot. They had great chemistry together and you could tell they had fun working together. It just looked easy for them because they could pull out their best stuff without worrying if the other guy could keep up.

The finish fit the characters so perfectly. Eddie was the crafty face that still wrestled like a heel. Angle was the overly aggressive, hyper-athletic guy that went to put Eddie away and when he realized Eddie had taken the boot off he was furious. Eddie pinning him with the tight inside cradle was the perfect way to end it. If they went a few more minutes and had Eddie hit a Frog Splash to win that would have been fine too, but I liked it better this way. 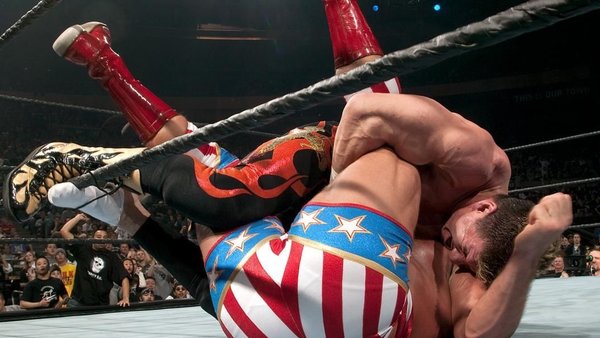 Eddie’s title reign lasted until Great American Bash in June 2004, so it was a four-month reign. He dropped the WWE Title to JBL, which made a lot of people upset because it meant a short title reign for Eddie. The main reason they took it off Eddie was that he was stressed out as champion. He never won the WWE Title again although he was supposed to get it back in late 2005. Unfortunately, he passed away on November 13, 2005. I thought this was Eddie’s best WrestleMania match in his career.