After a failed contract signing on Smackdown this week, WWE has decided to remove a title unification match from WrestleMania Backlash and replaced it with a huge six-man tag team match.

One of the segments advertised for Smackdown last night (a show that was taped last week) was a contract signing between Smackdown Tag Team Champions The Usos and Raw Tag Team Champions RK-Bro (Randy Orton & Riddle). The two teams exchanged words with Riddle saying that he thought The Usos should have nametags because he couldn’t tell the twin brothers apart. Orton helped Riddle out by telling him that Jey was the right-hand man while Jimmy is “nothing but a little bitch.” The Usos didn’t like that, so they started a fight.

After the fight started, the Undisputed WWE Universal Champion Roman Reigns made his way down to the ring with Paul Heyman. Reigns helped The Usos dominate RK-Bro leading to a double superkick and a 1D (The Usos version of the 3D). That’s when Drew McIntyre made the save for RK-Bro.

The Usos tried to stop him, but Drew beat them up easily. Drew slowly got into the ring with Reigns. Drew and Reigns got into a slugfest in the middle of the ring. Drew gave Roman a belly-to-belly suplex across the ring. Drew said he’s been waiting for a long time and then said “this is it” repeatedly. Drew stood tall with Orton and Riddle while The Bloodline backed away. You may recall that last week on Smackdown, Drew and Orton squashed their past beef by saying they were good now due to their dislike of Reigns and The Usos.

McIntyre and Reigns have been kept apart since last October when Drew was drafted to Smackdown, so having Drew say that he’s been waiting for a long time and “this is it” is a way of telling the audience that a Reigns-McIntyre title feud is likely coming soon.

Later on Smackdown, Paul Heyman went to WWE Official Adam Pearce to basically tell him that they wanted that The Bloodline (Reigns and The Usos) wanted a six-man tag team match. Pearce wasn’t sure about it, but later in the show, it was officially announced. At WrestleMania Backlash on Sunday, May 8th it will be Drew McIntyre, Randy Orton & Riddle vs. Roman Reigns and The Usos aka The Bloodline.

While the six-man tag at WrestleMania Backlash is intriguing, it does leave fans why would WWE spend weeks advertising the Tag Team Title Unification Match only to drop it just like that? Perhaps WWE changed their minds about unifying the titles. Perhaps they will go back to the Tag Team Title Unification Match in the future. We don’t know right now, but as is often in WWE land, plans change.

Speaking of next week’s Raw, it was advertised on Smackdown that Roman Reigns and The Usos will be on Raw this coming Monday. We know RK-Bro are regulars on Raw, so it’s possible that Smackdown’s Drew McIntyre will be there as well. 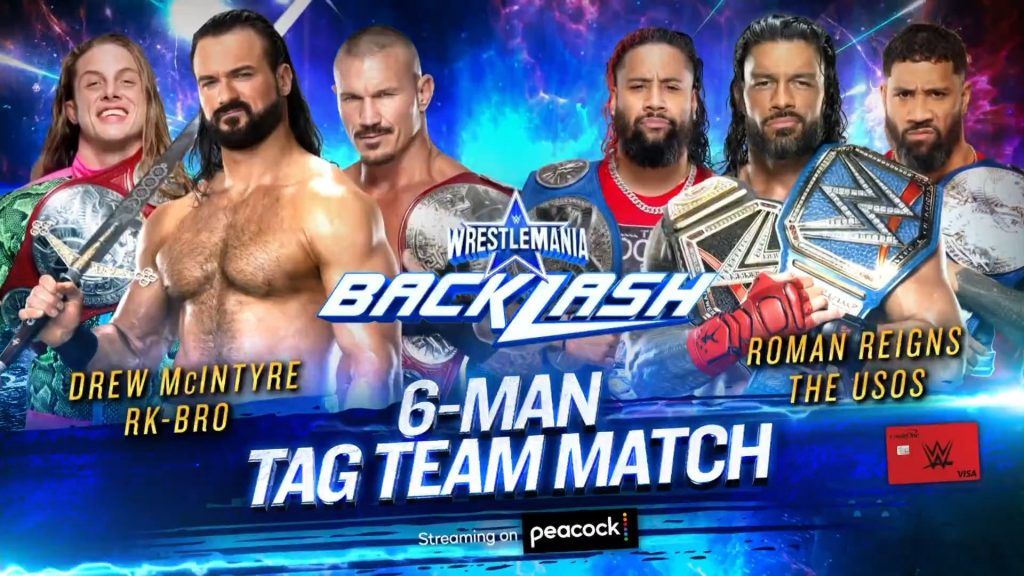