It’s a show that WWE is calling NXT Super Tuesday II because for the second straight week, NXT is airing on Tuesday night on USA Network. That’s because of the NHL Playoffs on USA Network on Wednesday. NXT will return to their usual Wednesday night timeslot next week. Tonight’s episode of NXT will be taped today along with next week’s show.

According to the preview on WWE.com, the NXT Title match will open the show.

First, Finn Bálor will face Adam Cole for the vacant NXT Title to kick off the show. Both men are seeking to become two-time champions after tying in last week’s epic 4-Way 60-Minute Iron Man Match.

Plus, it’s The Battle of The Badasses as Rhea Ripley looks to settle the score with Mercedes Martinez in a Steel Cage Match in the main event.

For the second straight week, there will be an NXT Championship match on the show after last week’s 4-Way Iron Man Match ended in a draw when Finn Balor and Adam Cole had two falls in the match while Johnny Gargano and Tommaso Ciampa had one fall each. Cole got his second fall in the final seconds after a Last Shot knee to Balor’s head. That led to NXT’s General Manager William Regal going into the ring to tell both men that they will compete for the NXT Title this week.

TJR Thoughts: I know that some people got mad that there was a tie finish in the NXT Title match last week, but I’m not going to complain when we get an awesome match like Balor vs. Cole for the NXT Title this week. It’s going to be fun to watch. Plus, they’re going to go on first, so it could be a really long match. I picked Balor to win the Iron Man Match, so I’ll pick him to win this match. I think Balor holding the NXT Title again would be cool to see. 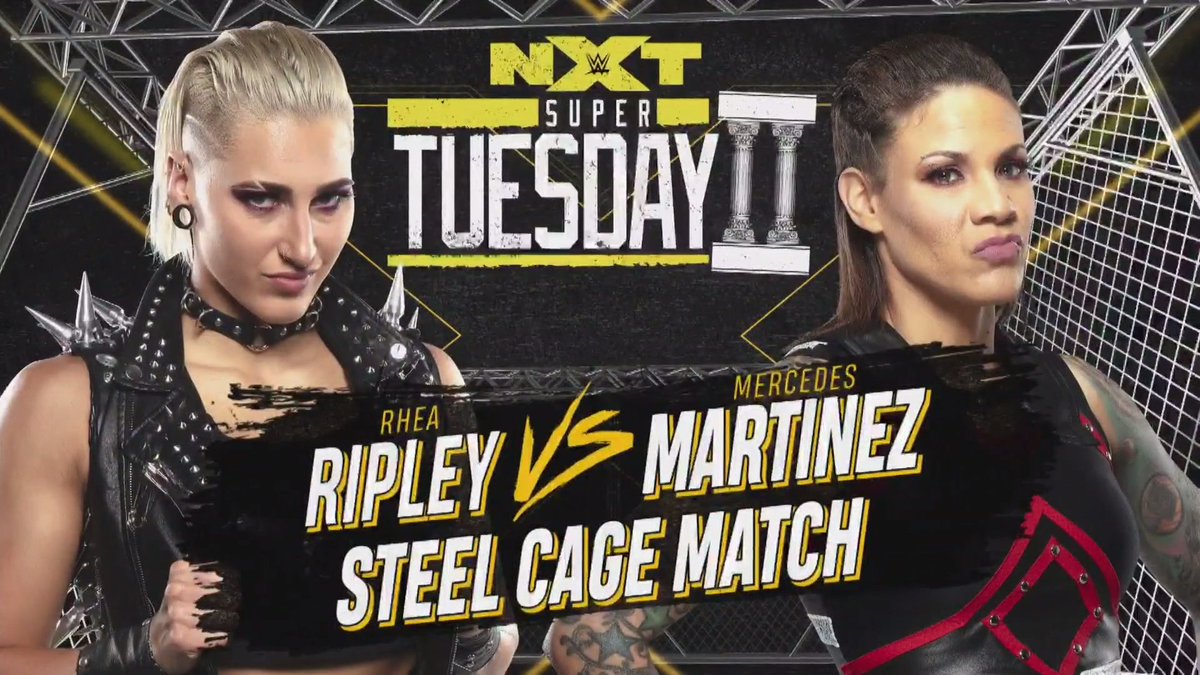 Rhea Ripley vs. Mercedes Martinez in a Steel Cage Match

This match has been set up over several weeks mostly because of Martinez interfering in Ripley matches. I can see it going either way since Ripley is the more established star in NXT that could use a win to move on from this rivalry. However, if Martinez wins it could set up her for a future NXT Women’s Title match against the babyface champion Io Shirai, which would make a lot of sense. I’m going with Martinez possibly due to an appearance from Raquel Gonzalez, who would stop Ripley from winning or Martinez will get help from her Robert Stone Brand ally Aliyah. Basically I’m saying Martinez wins in cheap fashion.

Here’s what else is advertised:

It could go either way, but I think it’s time for NXT to get serious about utilizing Killian Dain more than they do. I’ll pick him to win this match.

This was set up over the last few weeks with Theory getting in Reed’s face backstage and costing Reed a victory last week. Theory returned to NXT recently and you can tell that they are trying to build him as an annoying heel. I’m going with Reed to win this match as revenge for Theory interfering last week.

Wade Barrett is back for commentary

We don’t know right now if Barrett has signed a deal to become a full-time announcer on NXT, but it’s certainly possible since Mauro Ranallo moved on. We know Vic Joseph and Beth Phoenix are part of the team as well, so Barrett being there full time would be cool to see.

I’ll have a review of WWE NXT on Wednesday morning.

How Often Edge Will Appear After SummerSlam