WWE announced on Monday that Queen Sharmell will be inducted into the 2022 Hall of Fame on Friday, April 1 in Dallas, Texas.

Sharmell is married two-time WWE Hall of Famer Booker T and the family lives in Houston, Texas, so they’ll be in their home state for the occasion.

Sharmell was best known in pro wrestling as the manager of her husband Booker T when he was King Booker and Queen Sharmell. Earlier in her career, she was part of the Nitro Girls group in WCW.

The other official names announced for the WWE Hall of Fame so far are The Undertaker (inducted by Vince McMahon) and Vader. It was reported last week that Sycho Sid would be inducted, but that has not been announced by WWE yet. 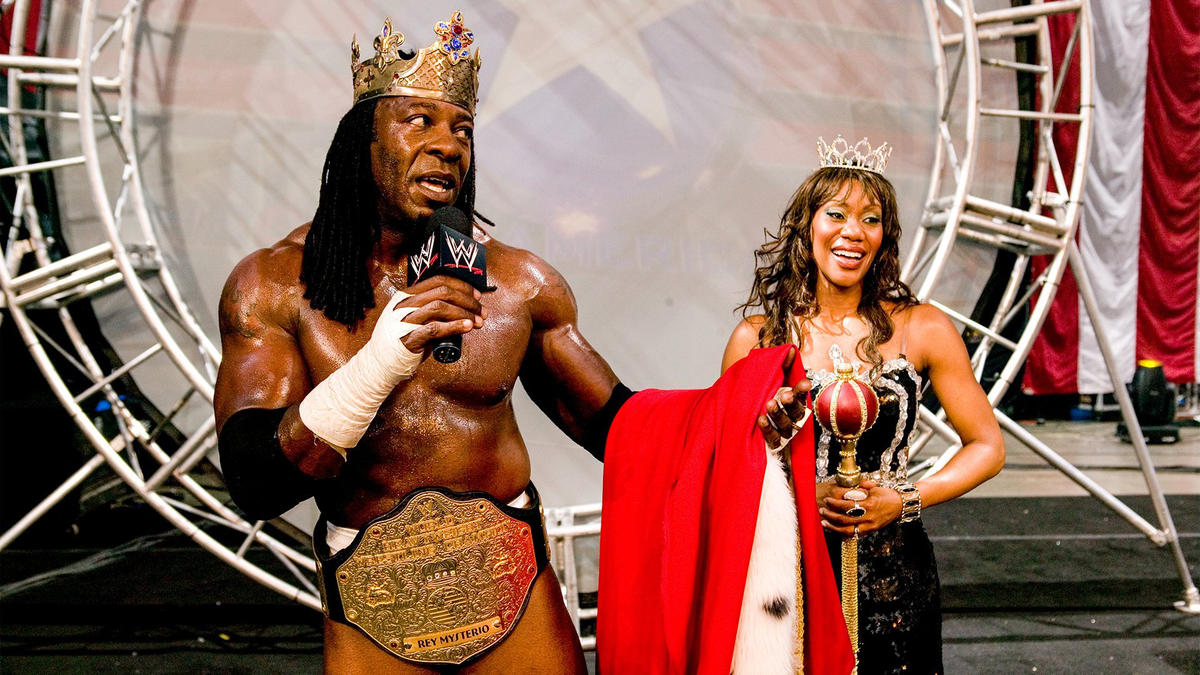 As first announced by Complex.com, Sharmell will be inducted into the WWE Hall of Fame’s Class of 2022 and will be enshrined in the hallowed hall during the 2022 WWE Hall of Fame Induction Ceremony as part of WrestleMania Week.

While she may be a former Miss Black America, winning 1991 Miss Black America Pageant at age 20, Sharmell was never just another pretty face. Behind that beauty stood an extremely cunning mind, and Sharmell was not afraid to do whatever it took to help her husband, Booker T, succeed in the squared circle and achieve success of her own.

Sharmell came to prominence during her time in WCW, first under the name Storm before eventually redefining herself as Paisley. As a member of The Nitro Girls, she soon became a competitor and accompanied other competitors to the ring.

After signing with WWE and training in OVW in 2001, Sharmell donned a blonde wig and added her special brand of talent to The Suicide Blondes as Sister Sharmell. She also became a backstage interviewer.

Perhaps her greatest contribution in WWE, though, was her association with real-life husband Booker T. Accompanying Booker to the ring, Sharmell made quite a splash when she began interfering in her spouse’s matches. Although the fan-favorite Booker feigned innocence at first, the charade was eventually broken, and the WWE Universe learned what a mastermind the lovely Sharmell really was.

When Booker T won the King of the Ring Tournament in 2006, he started referring to himself as King Booker, and inevitably, his bride became Queen Sharmell. Together the pair began using faux English accents and carried a superior attitude, becoming the couple that the fans simply loved to loathe. When King Booker defeated Rey Mysterio at The Great American Bash to become the new World Champion, Queen Sharmell and Booker T took their place on the top of the mountain.

The WWE Hall of Fame ceremony will take place Friday, April 1, at American Airlines Center in Dallas as part of WrestleMania Week. The event will stream live, exclusively on Peacock in the U.S. and WWE Network everywhere else. In addition, for the first time in history, WWE will present both Friday Night SmackDown and the 2022 WWE Hall of Fame Ceremony live on the same night at American Airlines Center, giving all fans in attendance an unprecedented opportunity to witness both events for one price. Tickets are on sale now.