The WWE Title match is set for WWE TLC on December 20. AJ Styles defeated Riddle and Keith Lee in a triple threat to earn the next WWE Title shot against champion Drew McIntyre.

Here’s more info about it from WWE.com:

A Phenomenal challenger awaits Drew McIntyre at WWE TLC, as the WWE Champion will meet AJ Styles with the title on the line.

The King of Claymore Country reclaimed the WWE Title with a grueling win over Randy Orton that began his second reign. McIntyre has prided himself on being a fighting champion, and will now face Styles who has began his most recent red brand tenure a perfect 6-0. The Phenomenal One earned his WWE Title opportunity with a “Sudden Death” Triple Threat Match win over Keith Lee and Riddle.

What will happen when these two elite Superstars meet in the ring for the first time?

For all of the details of the Styles win on Raw, here’s my recap of Raw right here. I also speculated on some of the other matches that might happen. It’s in the Raw Deal review at the bottom of the post.

WWE announced some of the shows they have coming to WWE Network this month. 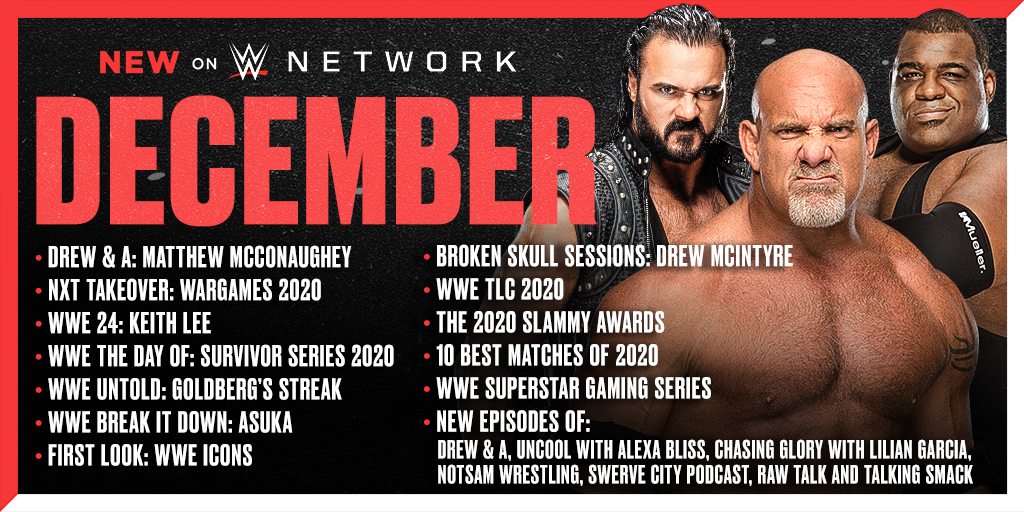 The interesting thing from that is that the next Steve Austin “Broken Skull Sessions” show has Drew McIntyre as the guest. That’s cool because it’s a current star instead of a big name from the past that Austin usually has.

I’m also intrigued by what WWE has in mind for The 2020 Slammy Awards because WWE used to do those, then they stopped doing them several years ago and now it’s back in some form.

The “WWE Superstar Gaming Series” is interesting also because we know WWE made their wrestlers give up their Twitch accounts where they played video games, so now it’s WWE likely doing something similar.

The documentaries like WWE 24 and WWE Untold are always great, so I will be checking those out too.

WWE Announces Musical Act for Tribute to the Troops

Here’s the press release from WWE about their musical act at this year’s Tribute to the Troops show.

HARDY to perform at 18th Annual WWE Tribute to the Troops

“I am so excited to play WWE Tribute to the Troops,” said HARDY. “As a big supporter of our United States military, I am honored to be able to perform for them. Can’t wait to rock the house and God bless America.”

“HARDY is an immensely talented singer and songwriter who has worked with some of the most prolific names in country music,” said Neil Lawi, Senior Vice President and General Manager, WWE Music Group. “WWE is thrilled to have him perform at TV’s most patriotic show of the year as together we celebrate our troops and their families.”

HARDY first made headlines as one of Nashville’s most in-demand songwriters, earning the prestigious CMA Triple Play Award and AIMP’s 2020 Songwriter of the Year plus nominations at the CMA and ACM awards, after writing songs for renowned artists such as Florida Georgia Line, Blake Shelton, Chris Lane and Morgan Wallen. Most notably, he co-wrote Blake Shelton’s award-winning, 3X PLATINUM No. 1 “God’s Country.” Now breaking out as an artist in his own right, HARDY released his acclaimed debut A ROCK (Big Loud Records) earlier this fall. The album’s GOLD-certified lead single “ONE BEER” feat. Lauren Alaina & Devin Dawson reigns as the No. 1 song at Country radio this week, marking HARDY’s first-ever No. 1 as an artist and eighth No. 1 as a songwriter.

WWE began Tribute to the Troops in 2003 to honor our servicemen and women and their families and thank them for their continued sacrifice to our country. HARDY joins an impressive list of Tribute to the Troops musical guests, who, over the years, have included top performers Florida Georgia Line, Mary J. Blige, Flo Rida, Train, Trace Adkins, Bebe Rexha and Machine Gun Kelly.

That’s all for now. Have a good evening.