Michelle McCool had a very successful career in WWE with a lot of highlights, but recently she recalled a story she was involved in that made her cringe.

The WWE career of Michelle McCool started in 2004 as a contestant in the first Diva Search. While she didn’t win the fan-voted competition, she impressed WWE officials enough to get a contract and learn to become a wrestler.

During her wrestling career in WWE, McCool accomplished a lot as the first woman (then known as “divas”) to win the WWE Divas and WWE Women’s Championships. McCool would go on to hold both titles twice in her career.

In 2009, McCool formed a heel pairing Layla that was called Laycool. They were sometimes accompanied by Vickie Guerrero as well. In late 2009, as the Women’s Champion, McCool had a feud with Mickie James, who was a top babyface at the time.

They had the infamous “Piggy James” feud where Laycool mocked James for gaining weight. It led to several segments where Laycool were very mean and insulting while performing ridiculous skits including dressing up in pig outfits, smashing a cake in Mickie’s face and doing parody songs. The feud is memorable to WWE fans because of how mean-spirited it was, perhaps too mean even for WWE’s PG brand of sports entertainment.

McCool recently appeared on the GAW TV Youtube show hosted by James, Lisa Marie Varon (Victoria in WWE) and So Cal Val where they talked about the Piggy James storyline. McCool credited James for being professional during the storyline.

“That storyline wouldn’t have worked had it been with anybody else other than you. The emotions were real at times. I tried to tell people, I would come up to you and apologize beforehand. I’m like, ‘This is hurtful. Like, this is legit, makes me cringe,’ which is why it did work … You were the ultimate professional.”

It was also noted by McCool that she hasn’t watched anything from that storyline again.

“I haven’t watched it back. It really did hurt my heart going through that … That is not my character … It was really an internal struggle for me.” 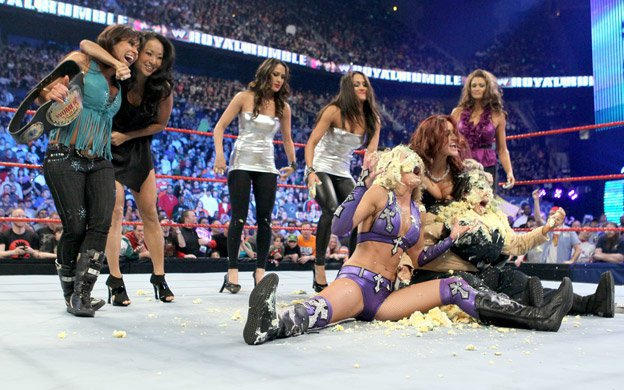 The story would have a happy ending for James, who defeated McCool soundly in just 20 seconds to win the Women’s Title at Royal Rumble 2010. After the match, James and the other babyface divas in WWE smashed a cake on Laycool as revenge. McCool retired as a full-time performer in WWE in 2011.

McCool married WWE Hall of Famer The Undertaker in 2010 and the couple has two children together. McCool also competed in the Women’s Royal Rumble matches in 2018 and 2022.

H/T Wrestling Inc for the transcipt.

Saraya Talks About Having Freedom In AEW