This week’s episode of AEW Dynamite is the second Fyter Fest episode themed episode. Last week’s Fyter Fest show featured three championship matches. This week was supposed to have AEW World Champion Jon Moxley defending the title against Brian Cage, but that’s been pushed back to next week’s special Fight for the Fallen episode of Dynamite. The reason for that is Moxley’s wife Renee Young had Coronavirus, so Moxley stayed home as a precaution and all indications are that Moxley should be ready to go next Wednesday.

As for tonight’s episode of Fyter Fest, it was taped last Thursday at AEW’s home base at Daily’s Place in Jacksonville, FL. There are actually spoilers that were posted on the internet because AEW let some fans attend the show and one of those fans posted spoilers. I’m not posting them, but if you are curious then the info is out there. I did read them out of curiosity, so I’m not going to offer predictions for the matches. What I’ll do is just list what is advertised and then offer some opinions on it as it relates to AEW storylines.

I’ll have a review of AEW Fyter Fest up on TJRWrestling most likely on Thursday morning.

Rose hasn’t had that much to do since losing the AEW Women’s Title, so this is about building her up to make her a top contender again. They didn’t announce who she is facing, so when that happens it usually means a squash match is coming.

I thought Archer was built up very well in the TNT Championship Tournament. Archer looked unbeatable at times until he lost the TNT Championship Finals to Cody. Archer hasn’t had much to do over the last month, so this is likely AEW’s chance to get him going again. Janela does have a nice connection with the fans when there are actually fans at the show. I hope Janela gets a chance to do more with Sonny Kiss as tag team partner because I enjoyed their last match a few weeks ago. Hopefully Archer gets a meaningful rivalry soon.

I have enjoyed this story with Brodie Lee’s Dark Order group trying to get Colt Cabana to join them. While Cabana has been reluctant to officially become a member of the Dark Order, he has benefitted from working with the group. The SCU trio works well together and they have a history with the Dark Order, so there’s a decent story going into this match. I would like to see Lee develop a rivalry with a singles wrestler because he hasn’t been featured as much since losing to Jon Moxley at the Revolution PPV. 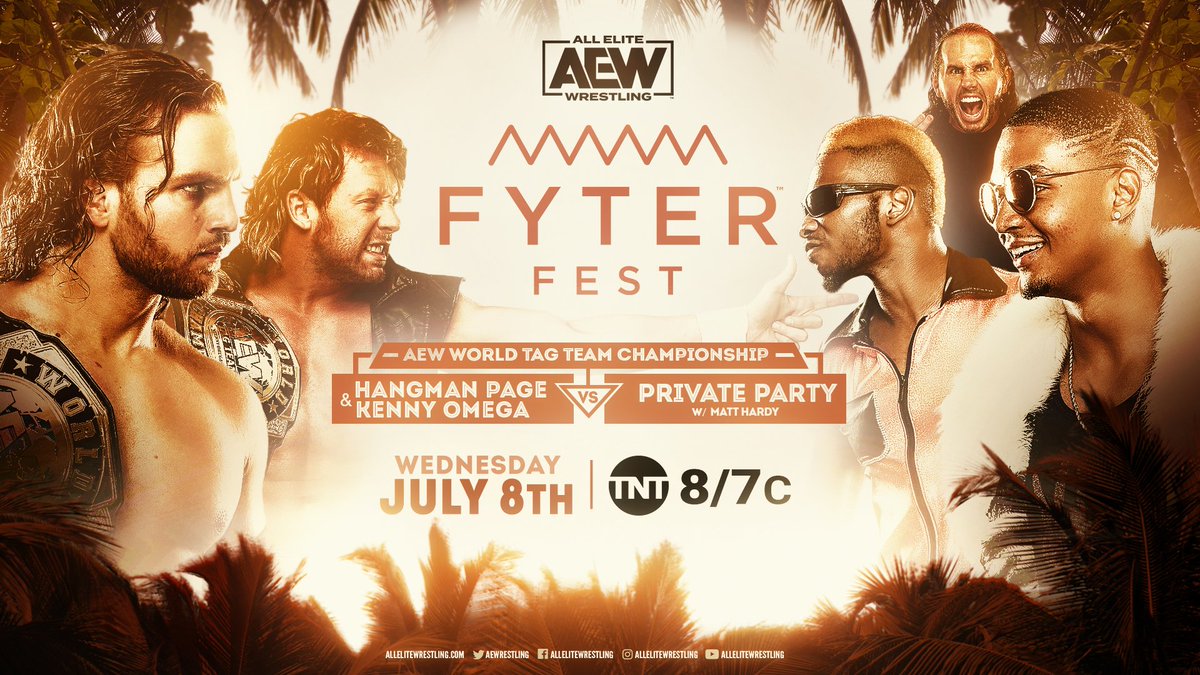 The Private Party team of Quen and Kassidy are the future of the tag team division in AEW. You can look at them as two guys in their early 20s that are going to be future champions at some point down the road. I like the Omega and Page team a lot although I mentioned last week that if they lost the titles to Best Friends I would have been fine with that. I think it’s definitely time for Omega and Page to get singles pushes as two guys that should be going for the AEW World Title instead of just being a tag team. The reason I say that is because AEW already has a lot of tag teams, so why put two singles wrestlers there? I get it because Omega and Page have had so many awesome matches together. I just think Omega and Page could be used better as singles wrestlers. I assume Omega and Page will lose the titles to either FTR or Young Bucks later this year. Private Party will likely look good in defeat.

It’s great that the Lucha Brothers are back in action after being sidelined a lot due to the health crisis. What frustrates me the most about Lucha Brothers is the way they ignore tag team rules while we know that FTR is a traditional team that wants to enforce the tag team rules. There’s also the story of the Young Bucks and FTR being on the same team as allies for now, but you know that at some point they are going to get into a big brawl to set off that rivalry. I think AEW is going to be smart enough to wait to do FTR vs. Young Bucks for the first time at the All Out pay-per-view on September 5. Perhaps it will be a regular tag team match with one of the teams holding the titles or maybe a triple threat match with Omega and Page for the titles. Anyway, there is a decent story with FTR having issues with Butcher and Blade as well, so I expect this to be an entertaining match.

This will likely be the main event because Chris Jericho commented on social media that this was one of the favorite matches of his career. You can see his post below.

I admit that I haven’t always been a huge fan of Orange Cassidy, but ever since AEW has been using him more as a wrestler, I think he’s done a good job. The story here is strong with Jericho feeling disrespected by Cassidy and busting Cassidy open as well. It also feels like this is the first of a series of matches where Cassidy is going to win in the end in order to put him over as one of AEW’s most popular guys. If this match happened in front of a normal wrestling crowd then I think the crowd would be on fire for it. I still expect a great match and I trust Jericho’s opinion that it will be fun to watch.

There is also a “Puppy Battle Royal” on AEW’s Youtube channel after the show. Something like that.