Sami Zayn is an entertaining guy that takes himself very seriously while his “friends” in The Bloodline have been known to laugh at him and even break character a little bit too.

The Bloodline trio of Undisputed WWE Universal Champion Roman Reigns and the Undisputed Tag Team Champions The Usos have been dominant in WWE for the past couple of years and the former Intercontinental Champion Sami Zayn has become an ally for the group.

On the August 19th episode of Smackdown, Zayn helped Roman Reigns when The Usos were not at the show. While Reigns was engaged in a battle with his Clash at the Castle opponent Drew McIntyre, Zayn appeared out of nowhere to jump into the ring, shove Reigns out of the way and McIntyre hit Sami with the Claymore Kick. That allowed Reigns to hit McIntyre with a Superman Punch. To McIntyre’s credit, he got back up with a Claymore Kick to Reigns, but Zayn saving Reigns showed how loyal Zayn was to The Bloodline group.

This past week on the August 26th episode of Smackdown, Zayn faced McIntyre in the main event of the show. Prior to the match, Zayn had a backstage segment with Reigns and The Usos where Zayn was talking about how he would play mind games to get in McIntyre’s head, which led to Reigns and The Usos laughing at him.

Here’s a clip from the segment on Smackdown posted by Kenny McIntosh of Inside The Ropes featuring Zayn telling Reigns and The Usos what he was going to do to Drew McIntyre later on Smackdown. Keep an eye on Jey Uso in the background putting his hand over his mouth to stop himself from really busting out laughing.

Zayn lost his singles match to McIntyre in the main event of Smackdown just like Zayn has lost to McIntyre multiple times earlier this year. However, this time around, The Bloodline was able to get the last laugh.

The foursome of Reigns, The Usos and Zayn did a 4-on-1 attack against McIntyre that led to them standing tall to end the show. Reigns even sat on a chair that he placed across McIntyre’s throat while The Usos and Zayn stood behind the Tribal Chief. 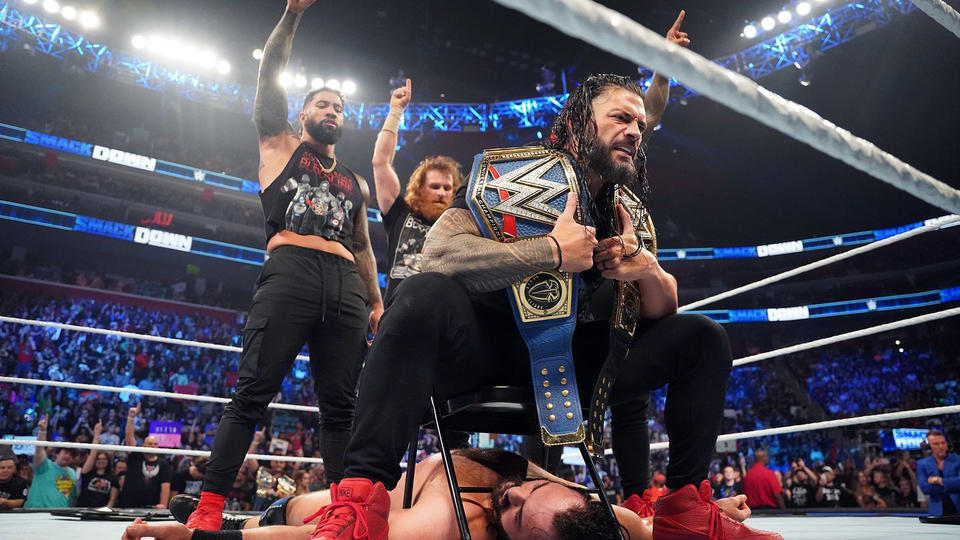 While Zayn and The Usos are not currently scheduled for a match at Clash at the Castle, they are advertised for this Monday’s Raw. As for Reigns, he will defend the Undisputed WWE Universal Championship against Drew McIntyre this coming Saturday, September at Clash at the Castle in Cardiff, Wales in front of 70,000 people.