Chris Jericho is a wrestling legend who has faced the best in the business for over three decades and now “The Wizard” has named his personal Mount Rushmore of wrestlers.

The idea of a “wrestling Mount Rushmore” is something that is often asked of people. It’s a reference to the Mount Rushmore massive sculpture in South Dakota featuring U.S. Presidents George Washington, Thomas Jefferson, Theodore Roosevelt and Abraham Lincoln.

When wrestlers get asked about picking Mount Rushmore, they usually try to name four wrestlers that are the best or their favorite or something along those lines. Since pro wrestling is such a unique business with a rich history, one wrestler or one fan is going to have a different reply from somebody else because there are so many options.

Jericho was recently asked the Mount Rushmore question while he was a guest on Superstar Crossover with Josh Martinez. Jericho said that his persona Mount Rushmore consisted of wrestlers that were his favorites.

“I love Shawn Michaels, Owen Hart, Ricky Steamboat, Hulk Hogan. Those were my four favorites when I was growing up so those will be my Mount Rushmore to this day.”

Jericho has accumulated many accolades in his career that saw him star in Mexico and Japan before becoming a household name in ECW, WCW, WWE (where he spent nearly 20 years) and of course in AEW where he has been since it started in 2019.

The leader of the Jerico Appreciation Society also explained why he can’t name himself on his own Mount Rushmore:

“You don’t pick your own face to be on Mount Rushmore. If that was the case then all of us would have four, four, four of us… The Mount Rushmore’s and the GOATs and all those sorts of things are such interesting topics of conversation but if you are a GOAT or you are worthy of being on someone’s Mount Rushmore, you probably don’t have to really say it.” 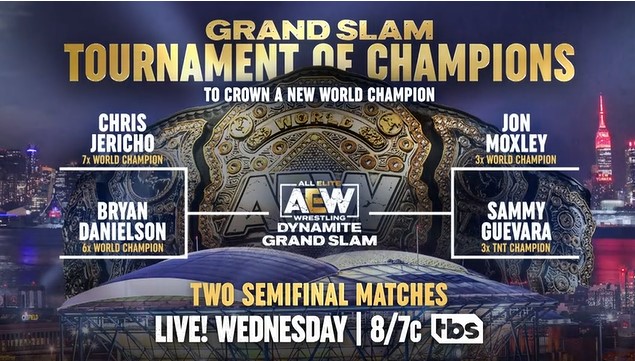 Jericho can add to his legacy in pro wrestling as he faces Bryan Danielson this coming Wednesday on Dynamite in the semifinals of the Grand Slam Tournament to crown a new AEW World Champion. The winner of that match will face the winner of Jon Moxley’s match against Sammy Guevara. Jericho beat Danielson in a singles match at All Out last Sunday, so he looks to do it in his question to be the AEW World Champion for the second time.

H/t to Wrestling Inc for the transcription.