This week’s All Elite Wrestling Dynamite episode features two titles and some other unique matchups. This show was taped last Thursday at Daily’s Place in Jacksonville (AEW’s regular home during the ongoing health crisis) after last week’s episode of Dynamite.

Here’s the line from AllEliteWrestling.com with some quick predictions from me. 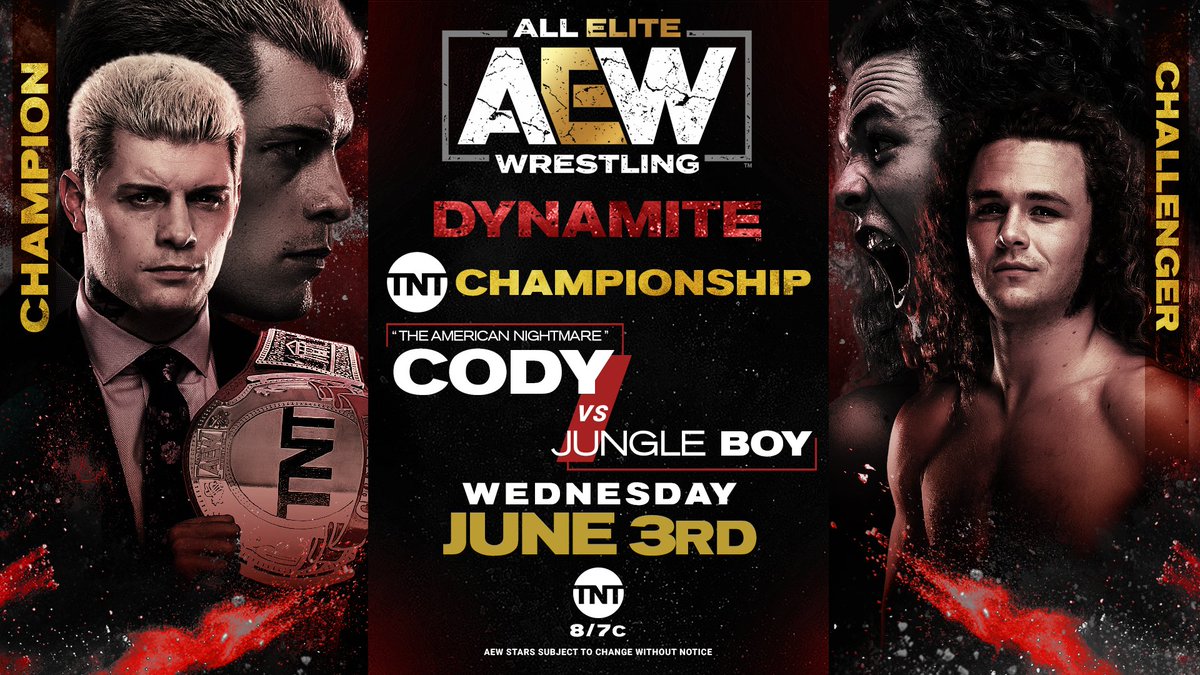 I think Cody will retain in his first title defense. Jungle Boy will likely put up a good fight and then fall in defeat in a match that goes in the 15-20 minute range. It’s possible that MJF does something to cost Jungle Boy the win, but it’s not like he is going to help Cody either. I just think MJF may get involved somehow.

The champions haven’t defended the titles in a long time since Page was absent from TV tapings for a few months. I believe Omega and Page will retain although Havoc and Sabian have been working well together. I just think that a more regular tag team should win the titles whenever Omega and Page lose them. Perhaps it will be Best Friends, Young Bucks, Lucha Brothers (when Pentagon comes back) or maybe even the new team FTR will win them. There are a lot of options.

A win for Rose makes sense to get her back on track after losing the AEW Women’s Title. However, Swole has a lot of energy and is skilled in the ring. They haven’t done much with her while the Dynamite preview notes she hasn’t had a match on TV in three months. This could be AEW’s chance to book Swole to get in the mix with the top women in the company. It wouldn’t be a bad thing if they did that because they need to freshen things up a bit. It’s just hard to see them booking Rose to lose two matches in a row after losing the Women’s Title at Double or Nothing two weeks ago.

Is @ColtCabana the one to blame? @IAmJericho seems to think so.
These two will face off this Wednesday on Dynamite!

Watch #AEWDynamite every Wednesday night on @TNTDrama 8e/7c or https://t.co/GdI7QAsxEP for our International fans. #AEWonTNT@AEWonTNTpic.twitter.com/1y1HexhO1I

It’s a matchup of two experienced guys that can wrestle serious matches or do the comedic thing if they feel like it. Cabana hasn’t done that much since he started in AEW while Jericho continues to be a top star even when he’s not holding the AEW World Title. I’ll go with a Jericho win here although I expect Cabana to come close to winning a few times.

Brian Cage will be in action

It should be an easy win for Cage, who has a future AEW World Title shot against Jon Moxley at Fyter Fest. We don’t know when Fyter Fest will be, but we might find out during Dynamite tonight.

FTR will be interviewed by Tony Schiavone

Here’s what is on AEW’s website about this interview:

Last week they made quite an impactful debut on “Dynamite”, and this week Dax Harwood and Cash Wheeler will sit-down with Tony Schiavone to get a few things off their chest! They crashed onto the scene a week ago to fight off The Butcher and The Blade’s assault on The Young Bucks, and then promptly turned their backs on Matt and Nick Jackson following the save.

What prompted that assist from Dax and Cash, and their rather dismissive actions after the fact? Where are their heads at, and what brings them to All Elite Wrestling, the home of the absolute best tag team wrestling on the planet? A desire for the competition? A hunt for championships? Or something even deeper?

Hopefully Tony Schiavone can find the answers this week when he sits down with FTR, Dax Harwood and Cash Wheeler, on this week’s edition of Dynamite!

I am interested to see what they say and who they target as their first opponents whether it’s The Young Bucks or somebody else.

I’ll be back for the AEW Dynamite Review later tonight or early tomorrow. I’ll try to get it posted this evening, but sometimes it doesn’t happen that way.

Otis Says His Father Has A Crush On WWE Star