New Year’s Day 2022 was the first annual WWE Day 1 “premium live event” (that’s what they’re calling them now) and it was a pretty memorable show.

These five things might come off a little different because I was actually at the State Farm arena for this show and enjoyed pretty much all of it. The crowd was hot pretty much the whole night which always helps the viewing experience both in the arena and watching at home. The doors opened at 6:00 pm and shortly before the doors opened, I got a notification on Twitter that WWE Universal Champion Roman Reigns had tested positive for Covid 19 and would not be able to compete at the show. First of all, best wishes to the Tribal Chief and I hope he has a speedy recovery. 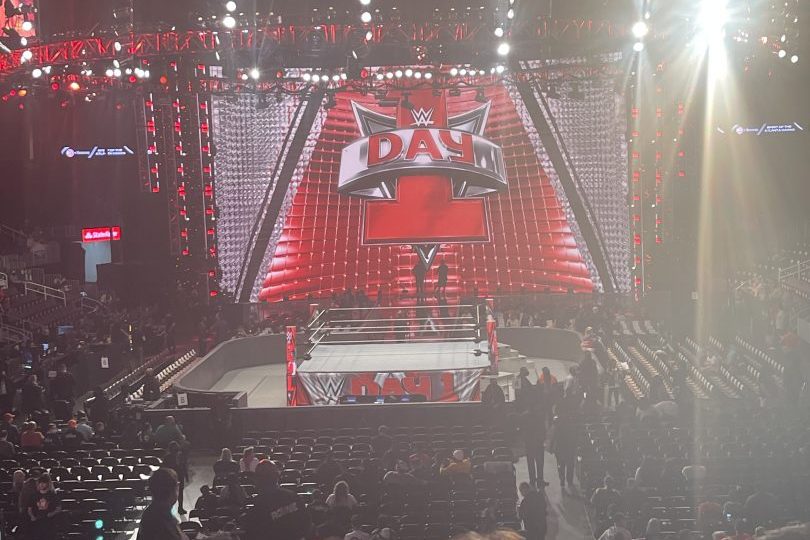 Most of the crowd waiting to enter the building were not aware that Roman Reigns was not going to be there. Once we entered the building we quickly found out as announcements were being made on the Titantron that Roman was out of the Day 1 main event. The crowd initially sounded displeased, but once the announcement was made that Brock Lesnar was being inserted into the WWE Title match, most of that displeasure quickly dissipated. The show overall was a pretty solid show. I went back and watched it when I got home to see how it came off on television and I don’t think television did it justice as to how lively the crowd was for certain people that night.

#5: THE USOS AND NEW DAY TORE THE HOUSE DOWN 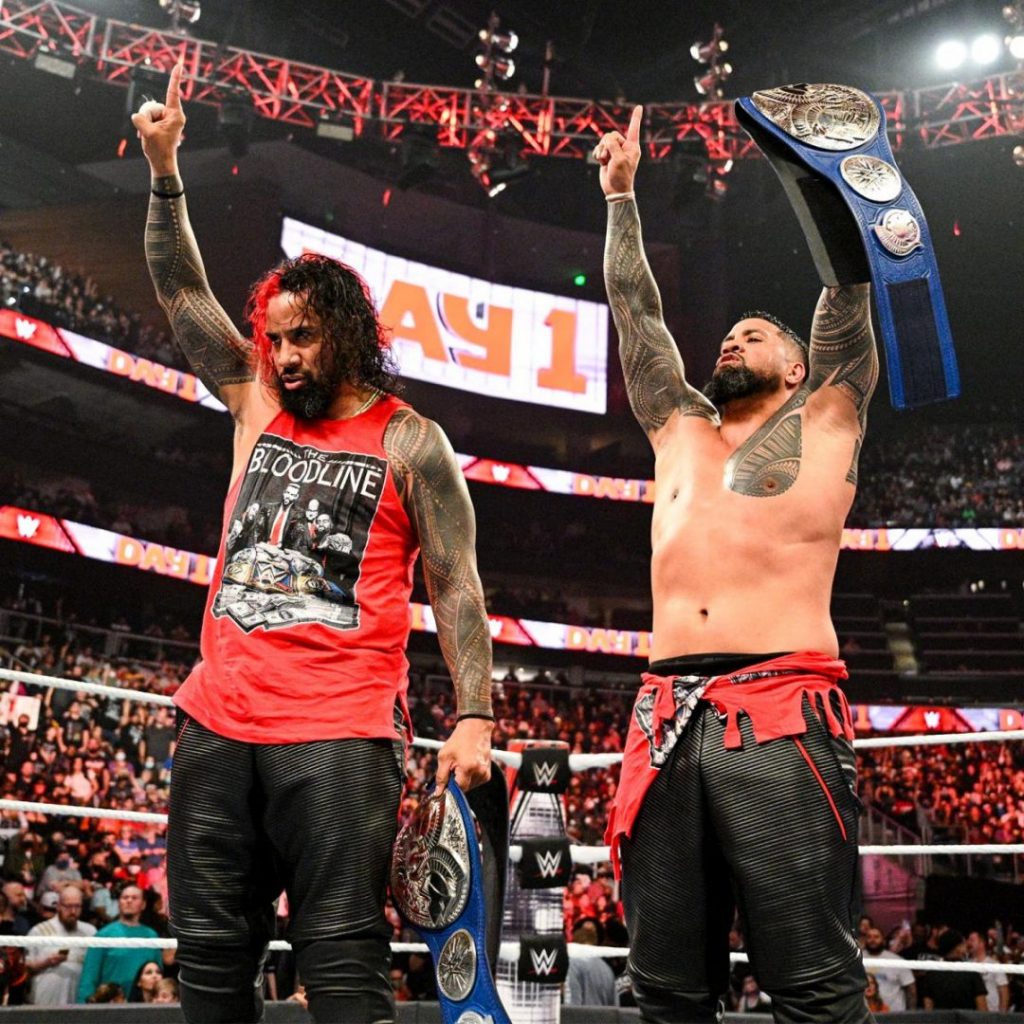 This was a smart way to start off the show. The Usos and New Day have never had a bad match. The crowd was hot for both teams, but I think I would give the edge to The Usos as far as who got the loudest pop. It was my first time actually hearing King Woods’ new theme live and it is a pretty solid banger. The match itself was a typical classic from these two teams. There were several spots where the crowd around me legitimately thought The New Day was going to win.

From kicking out of the Uso Splash to the hot tags, the crowd was literally on top of everything. I personally didn’t think the Usos would lose. I don’t think they lose those titles until the Bloodline starts to fall apart. I don’t think that’s happening yet. It’s probably the best WWE tag match I’ve seen on pay-per-view in a long time. I know my buddy John Canton called it the best match of the night in his review. Great showing by all four guys. 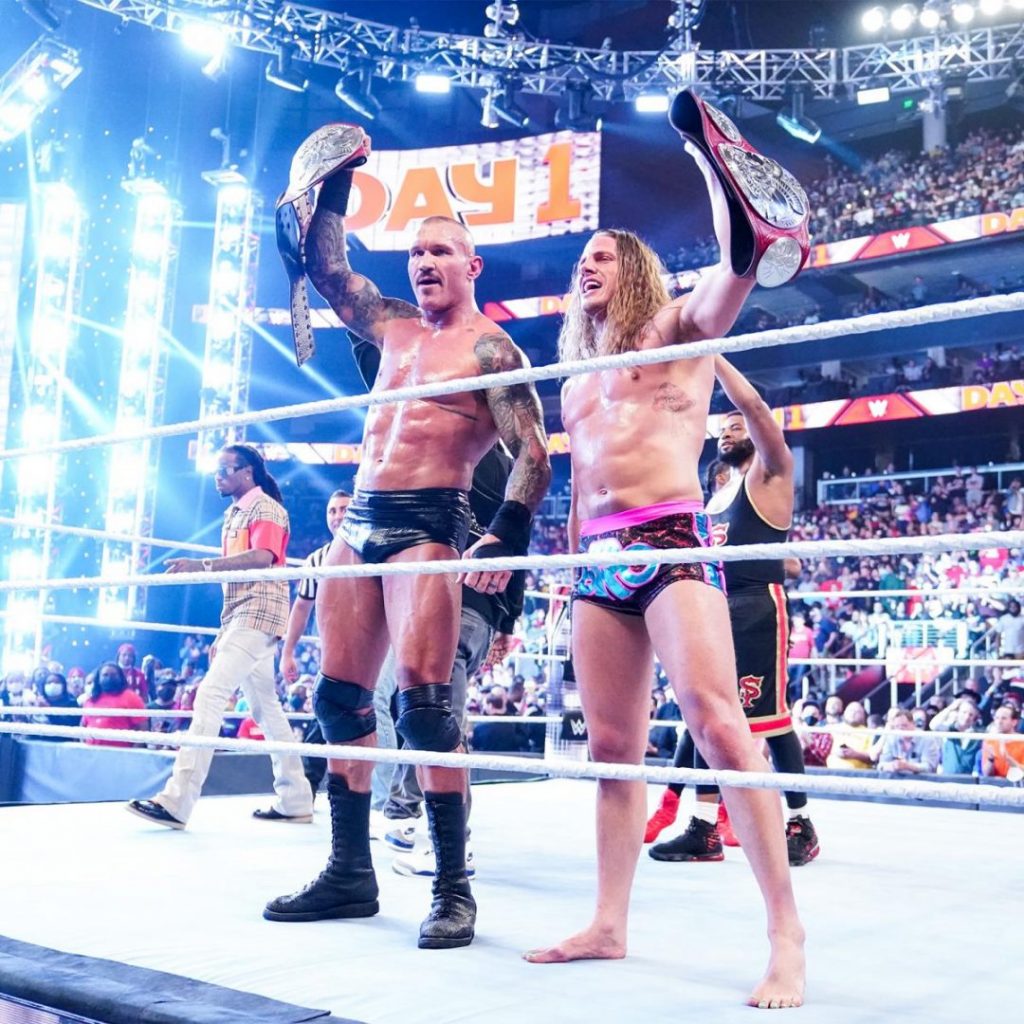 RK-Bro and The Street Profits put on a pretty good tag team match, It wasn’t as good as The Usos and New Day, but that’s a hard hill to climb. It was surprising early on to see The Street Profits working more of a heel style in the match but I guess they figured RK-Bro was going to be the more popular act. Them bringing out Migos sealed that part.

I have noticed a more aggressive Street Profits over the last week against babyface teams like The Mysterios and RK-Bro. I honestly thought we might see a heel turn after the match with the handshake but it didn’t happen. I wouldn’t do it. With both RK-Bro and The Mysterios rumored to be splitting up soon, turning The Profits heel might not be the best move. Randy Orton is still one of the most popular guys on the roster and the tag team RKO at the end drew a pretty good pop. The team is working and it is going to be a huge moment when the split happens. 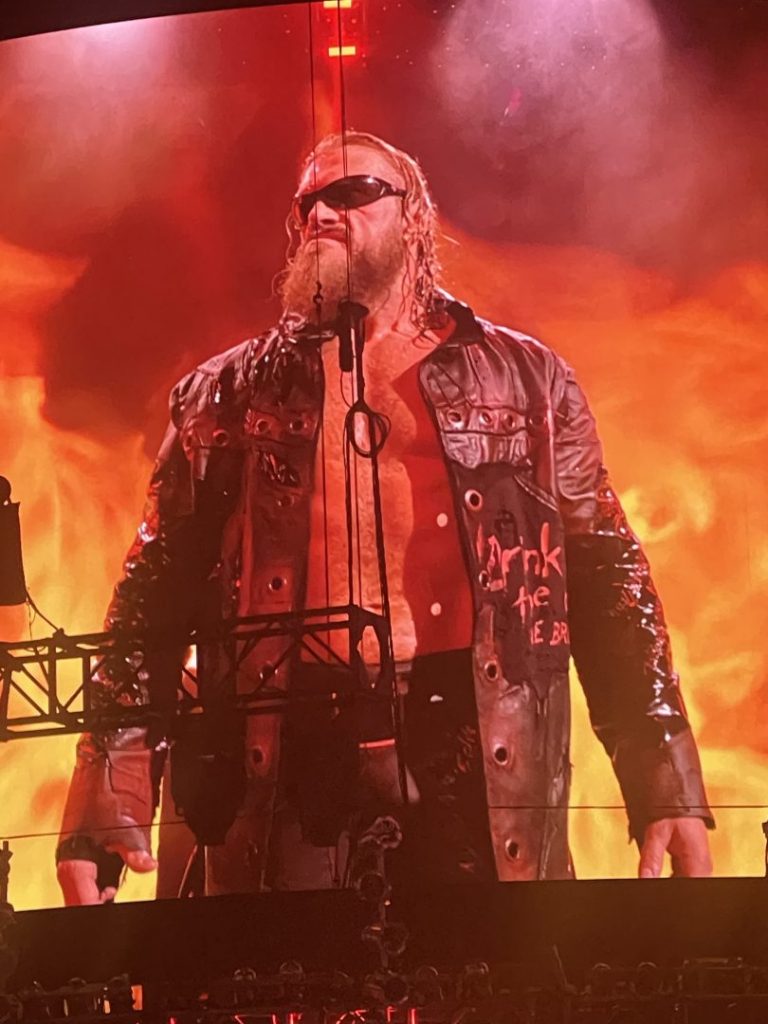 On Saturday night, The Miz proved how valuable he can be when WWE puts him as a more serious character and not the goofy stuff he was doing with John Morrison. The Miz and Maryse act is so good. Maryse adds so much to the presentation of The Miz character. I don’t know how long she wants to be on the road. but I would keep those two together as long as humanly possible on screen. The match itself was great. The Brood entrance for Edge was top notch. I don’t know who reminded Vince McMahon over the last few months that The Brood was a thing, but they deserve a raise. One of my favorite themes ever. Miz showed that he could hang with Edge. This is The Miz we want to see. There were points where it looked like Miz might actually win the thing.

Then Beth Phoenix came out. We actually saw her a couple of seconds before they showed her on the show, but she easily got one of the top three biggest pops of the night. Even though the music was delayed, it didn’t hurt her live pop. Having her come down and chase off Maryse was great. It set up The Miz for the Spear and the 1-2-3 for Edge. I liked that Beth never actually got her hands on Maryse. Save that for a big moment like a mixed tag match at the Royal Rumble. Great showing by all parties involved. 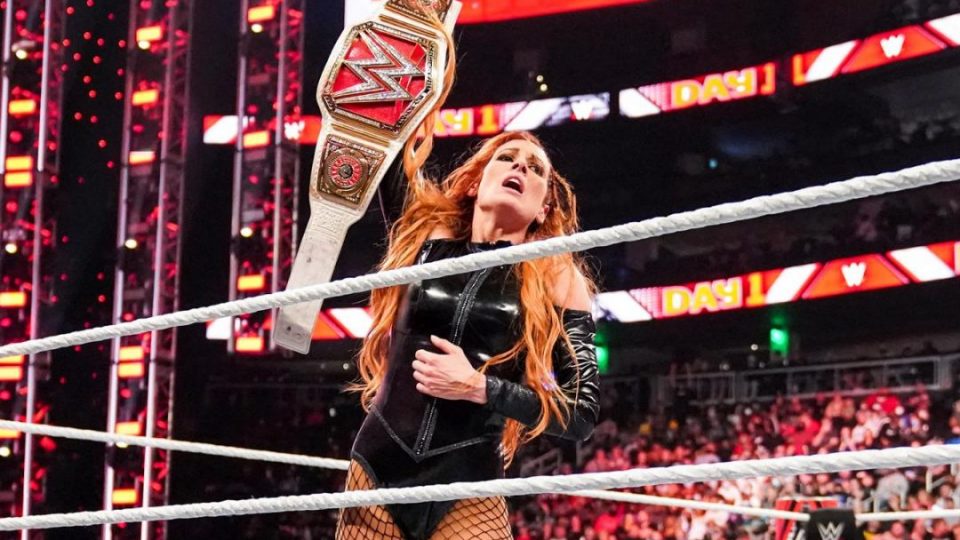 The match I had high expectations for was Becky Lynch defending her Raw Women’s Championship against Liv Morgan. I think this match was better than the one on Raw a few weeks ago. Liv did a terrific springboard powerbomb on Becky off the turnbuckle. Liv Morgan and Mandy Rose are probably the two most improved women on the entire roster. Becky countered Liv’s finish and hit the Manhandle Slam for the victory. I’ve seen social media in an uproar since Liv lost. People talk about Liv being ruined, buried, etc. Tell me, other than winning that one match, what has Liv Morgan done that would make anybody believe she is on the same level as a Becky Lynch? The answer is nothing. Even though I rooted and wanted Liv to win, she wasn’t ready. “Crowd support” doesn’t automatically make you ready to be a champion. If that was the case, 90% of the roster would be.

What Liv showed in the last two matches was that she CAN hang with the top woman on the brand. She came within an inch of beating her twice. What you can do is build on that. You’ve shown the audience that she is not a pushover, and she can hang with the best. Do you know what made Bianca Belair before she even won the Rumble? Losing. How many NXT Women’s Title matches did she lose? Then she got drafted to Smackdown and started racking up wins. That is the blueprint for Liv Morgan to follow. How many WWE Title matches did Shawn Michaels lose before “the boyhood dream came true”? I won’t say wins and losses don’t matter because they do. However, If you build upon those losses then you have a star. They really just started building Liv up a couple of months ago. How long did AEW build up Adam Page? How many BIG matches did he lose before winning the big one? There are examples in every company. People in 2022 need to stop wanting everything to happen immediately. Babyfaces do not have to win every title and every match. It’s okay for a babyface to struggle before climbing that mountain.

#1: BROCK LESNAR IS THE WWE CHAMPION 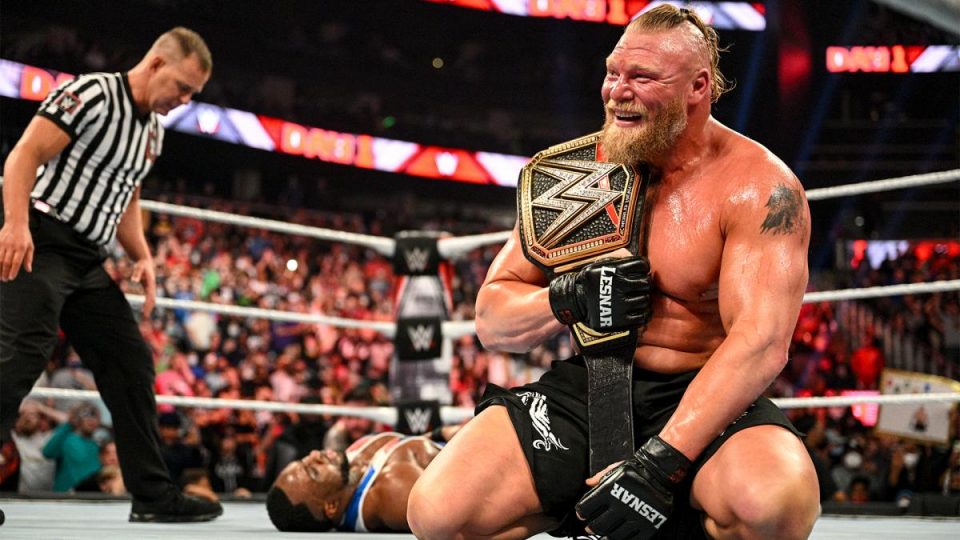 This was the shock of the night. First of all, Brock Lesnar got the pop of the night to the surprise of nobody. The match was a sprint that was under ten minutes and for the short amount of time, it was a pretty good sprint. There were good interactions with Bobby Lashley and Brock Lesnar as well as Big E and Brock Lesnar. Eventually, Brock Lesnar hit the F5 on Big E to capture the WWE Championship. A lot of outrage over this one as well. I can see why they’re upset. Big E was a great choice as WWE Champion. He deserved to have a longer reign. That being said, I am not upset that Brock Lesnar won the WWE Title. He was clearly the most over guy in the match and on the entire card. The crowd popped huge when Brock Lesnar won the match.

Does that mean Big E is buried? No. Big E does not look bad losing in a match where four other people were involved. It’s the same issue I brought up with Liv Morgan. The difference is Big E has been a big-time player so far. Fans don’t seem to think wrestlers can rebound from losses. Do I believe that Brock Lesnar needed the win? No. At the same time, it is giving us Brock Lesnar vs Bobby Lashley. Babyface Brock Lesnar has been one of the highlights of WWE over the last several months. I do not think he holds the title long but the overreaction of losses in this era is mind-blowing to me. I love Big E. I think he will win the title again but right now, Brock Lesnar is a good choice to spice up Raw. Brock Lesnar looks like he is having the most fun he’s had since returning in 2012. I think it is smart to capitalize on that.

That is it for this week. The Royal Rumble is coming up later this month so we will see how WWE follows up with a pretty good show. There were some interesting booking decisions but overall I thought it was a pretty good show. Do I agree with the decisions? Not all of them. However, I’ve never overreacted over one loss for any character. It is about how you follow up with that loss. Do you follow it up with that person overcoming the struggle and coming out the other side? Or do you just send them back to catering and forget about them for six months? That is how you determine whether a loss “ruined” anybody.