“The custody of a child will be determined in a ladder match” – Michael Cole, on commentary.

That wasn’t a joke; that line was spoken with complete seriousness. In 2005, WWE really went back to its ‘wacky’ roots with one of the most absurd yet entertaining storylines in years. It involved two partners and friends turned bitter enemies, a child supposedly born out of wedlock, a big secret, and a big family cover-up. Only in wrestling could the above line be said and it be actually taken seriously.

Though by no means was this some kind of groundbreaking classic, I’ve been told that it’s one of the most entertaining matches in SummerSlam history. And since it’s SummerSlam season, I figured it was time to go over this interesting and “unique” match.

It’s time to review the “custody of Dominick” ladder match between Rey Mysterio and Eddie Guerrero from SummerSlam 2005.

All throughout 2005, Eddie couldn’t beat Mysterio. They were tag team champions when the year started and won together a lot. But when they faced each other Rey won every match they had. And over time, that issue began to really bother Eddie. It got worse and worse and worse, until Eddie snapped. He turned on Mysterio during a tag title defense against MNM and left Mysterio to take the fall. Eddie and Mysterio lost their titles and then Eddie Mysterio bloody. In the weeks and months afterwards, Mysterio would still win, causing Eddie to slip further into madness and desperation. In one of his more iconic “promos” Eddie managed to tell an entire story without uttering a single word:

Eddie was simply on fire here. A year earlier, he was perhaps the best underdog hero in WWE. Now, he was getting people to despise and was highly successful.

All of this led to a match at The Great American Bash 2005 that Mysterio won. But in the lead-up to that match, Mysterio was given an additional ultimatum: he had to win else Eddie reveal ‘Rey’s little secret’. Mysterio won but it was for naught because, well, EDDIE LIED! In what can only be described as WWE’s take on an internet meme, Rey was NOT THE FATHER; Eddie was.

Things only escalated from there as Eddie sought custody over of “his” son through the courts. But all that stuff is boring and not fit for WWE so instead, Eddie and Mtsyerio decided to resolve this in a winner-takes-all ladder match, with the ‘all’ in this case being Dominick.

This match originally took place on August 21st, 2005. It was rated ***1/2 out of five by the Wrestling Observer’s Dave Meltzer and ***3/4 by TJR’s John Canton. Eddie is 0-6 against Mysterio in televised matches, according to the commentators.

Eddie trash-talks Mysterio as the fans chant ‘Eddie sucks’. He cheap-shots Mysterio and then lands a snap back suplex, but then Mysterio reverses an Irish whip and monkey flips Eddie across the ring. Mysterio goes after Eddie but Eddie cuts him off and smashes him into the ring steps and then into a ladder on the entrance ramp. Eddie sets the ladder up in the ring and climbs but Mysterio cuts him off with a springboard dropkick. Eddie introduces a second ladder but Mysterio dumps him back to the floor and then the two fight over that ladder. Mysterio dropkicks it into Eddie’s face and then lands a springboard senton to the floor, missing the ladder Eddie was holding completely. Normally I’d question how a wrestler can have such perfect timing and placement, but this is Rey Mysterio we’re talking about so it makes complete sense.

Back in the ring, Mysterio starts climbing the ladder but then Eddie climbs from the other side. The two brawl atop the ladder until Mysterio sinks down. Eddie reaches up and grabs the briefcase containing Dominick’s custody papers but Mysterio fights back. Eddie smashes Mysterio’s head into the ladder and dives off with a sunset powerbomnb. It’s almost like that time with Edge in 2002 but not as clean.

Eddie rams the ladder into Mysterio’s ribs and then into his head. he sandwiches Mysterio between two ladders and hits a tope con hilo but seems to hurt himself as much as he hurt Mysterio. Eddie hits Mysterio with one ladder and starts climbing the second one. Suddenly, Mysterio takes his ladder and places it against the one Eddie’s climbing to form a ramp. Eddie reaches for the briefcase again but Mysterio cuts him off. Mysterio back body drops Eddie over his head and onto his ladder but the first ladder falls as well. Everyone and everything falls down in a heap.

Eddie places one ladder flat in a corner and goes after Mysterio. Mysterio charges at him bt Eddie counters into a powerbomb lift facebuster that sends Mysterio ribs-first into that ladder. Eddie starts climbing as Mysterio writhes in pain, but Eddie’s slow since his back’s giving him problems. suddenly, eight-year-old Dominick enters the ring. How did he get past that Child Services worker? Dominick tries shaking the ladder as Eddie climbs but he lacks the strength. Eddie admonishes and yells at him, saying ‘you’re gonna love me (father of the year, everyone). But that distraction gives Mysterio the chance to fight back. Mysterio lands some punches and another back body drop. Eddie tries reversing the momentum and sending Mysterio into a ladder setup against the ropes but Mysterio blocks and sends Eddie into that ladder face-first. Mysterio follows with a 619 into the ladder which hits Eddie’s face, but Mysterio hurts his knees in the process. Undeterred, Mysterio hits a springboard leg drop that sends the ladder into Eddie’s head again. Mysterio climbs the ladder. He grabs the briefcase. Eddie climbs up behind him and lifts Mysterio onto his shoulders. Eddie’s going to drop Mysterio backward when Mysterio counters into a diving sunset powerbomb of his own. both of them collapse but Mysterio gets up first. He reaches for the briefcase and starts unhooking it. he’s so close. But Eddie kicks the ladder from underneath him. Mysterio’s left dangling above the ring and then Eddie catches him with a powerbomb.

Eddie sets the ladder up and uses it to pin Mysterio under it so he can’t move. Eddie makes it almost to the top when he starts trash-talking a seemingly helpless and immobile Mysterio. Now Eddie tries unhooking the briefcase but Mysterio starts shaking the ladder. Mysterio musters enough strength and momentum to push the ladder aside, leaving Eddie dangling. Then Mysterio pulls Eddie down and Eddie seems to hit his awkwardly. Extremely frustrated, Eddie starts cursing (though his words are censored in the video below) and hitting the mat (more on this below).

Both wrestlers get up and Eddie hits his Three Amigos suplexes, with the third one dropping Mysterio onto a ladder. Eddie sets up and climbs a ladder again but this time his wife Vickie Guerrero interferes. She yells at Eddie from below and then knocks the ladder over as Eddie reaches for the briefcase again. Mysterio takes advantage and climbs again. Eddie goes to climb the other side but Vickie holds Eddie back. Mysterio unhooks the briefcase! Thousands of fans jump out of their seats and cheer for Mysterio as he falls back down. Cole: “Rey Mysterio has his son back!”

Post-match, Mysterio has an emotional “reunion” with HIS son and also his wife Angie. Then for good measure he hits Eddie with the briefcase to end this feud once and for all.

I usually don’t like matches with ludicrous Springer-style stories, but this one’s an exception. The crowd was surprisingly into this match and all its wackiness. Though I shouldn’t be surprised; how many people out there have struggled with parents, family secrets, and CPS over the years? This match’s story and background, though absurd, was still entertaining. It was one of the most ‘pro-wrestling’ gimmicks and stories in a long time. As for the match itself…I’ve seen better. This wasn’t anywhere remotely close to the best these two have had together. But considering it was the gimmickiest match they’ve ever had, it worked well enough.

I didn’t go into this expecting some kind of in-ring classic or something game-changing. This wasn’t the match for that sort of psychology. This was meant to be a personal war between a semi-sociopathic bastard (Eddie) and a sympathetic underdog (Mysterio) who were battling in a more primal way over custody of Dominick. It’s still weird typing those words out because the idea of a custody dispute being settled in a ladder match is so mind-numbingly ridiculous. But this match wasn’t about moves, technique, or logic. It was about emotion. It was perhaps the best example of wrestling as a soap opera in years, possibly decades. And the crowd went along with the story perfectly. They despised Eddie completely and cheered for Mysterio loudly. They popped when both Dominick and Vickie made their appearances. They weren’t as interested in the stuff happening in between the big spots; they only cared about the ladder climbing moments because that’s all that really mattered here. it was a simple match, but it was still entertaining enough.

There were some notable botches throughout the match though, such as Eddie’s sunset bomb and some of the more convoluted ladder setup sequences. But the worst was with Vickie, who famously missed her cue. That bit when Eddie was left hanging and then fell down wasn’t supposed to happen. Eddie was frustrated because, in his own words, ‘WHERE THE F**K WAS VICKIE?!’ He and Mysterio had to improvise for the next minute or so until she came down and completed the proper spot. But that didn’t hurt the match too badly; Vickie made up for that mistake by helping Mysterio win. I think it would’ve been better if Vickie actually willed Mysterio on or helped him a bit more directly instead of just standing there in a corner, frozen. She was fully aware of what she was doing, she shouldn’t have had any doubts about her actions since, in story, she consciously ran down to stop Eddie. 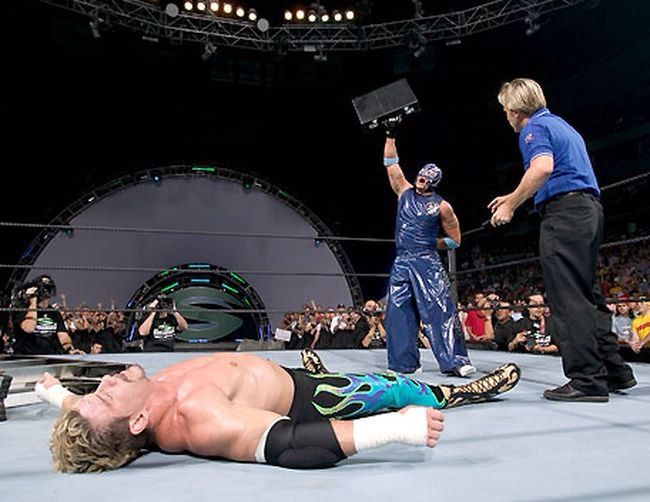 I usually like wrestling to be more straight-laced and devoid of nonsense but there are some times when the most ridiculous stuff can be entertaining. This match, like Hogan vs. Rock at WrestleMania X8, was more about emotion than it was about action or depth. This was a gimmick match through and through and it was better than it had any right to be.

SummerSlam 2005 didn’t have that much in terms of historically-great matches or anything but it did have its moments of pure entertainment. This was one of them. It’s not meant to be taken seriously, even though the stakes were high in the story of the match. WWE’s creative forces have tried to make similar storylines like this one many times in more recent years, but most of them have bombed. Of course, this one had Eddie Guerrero at his peak in terms of character work so those later matches failing to match this one’s higher standard makes total sense.