Twenty years ago WWE SmackDown experienced what is widely considered its greatest peak. With Paul Heyman at the helm, SmackDown flourished and actually did better than Stephanie McMahon’s RAW at drawing in fans and putting on shows that people actually wanted to see.

Central to Heyman’s success was the crew known as the SmackDown Six: Angle, Benoit, Eddie, Chavo, Edge, and Mysterio. Each week these six wrestlers would be mixed up and put in matches with one another and the results were great more often than not. And today we revisit one of the more famous early matches involving two of those famous six wrestlers.

It’s the singles match between Edge and Eddie Guerrero from the September 26th, 2002 edition of SmackDown.

Edge beat Eddie at SummerSlam 2002 and then Eddie beat Edge a month later at Unforgiven. With both wrestlers having one win apiece, a tie-breaker was needed. But instead of delaying that deciding match to a PPV, Paul Heyman decided to give it to the fans for free on SmackDown. After all, Heyman’s SmackDown was all about showcasing action and wrestling as opposed to the promos and angles on RAW. With Heyman in charge of building up stars, his approach was to emphasize strengths and conceal weaknesses, which he did by putting mixing in wrestlers with different combinations of strengths and weaknesses together so that they could complement and learn from each other. 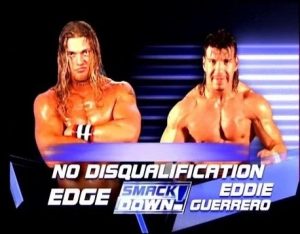 This match originally took place on September 26th, 2002. It was rated ****1/2 out of five by the Wrestling Observer’s Dave Meltzer. After almost twenty years to the date, let’s see how well this match holds up.

This is a No Disqualification match. The bell rings and both wrestlers immediately start tussling for control. Eddie sends Edge into the ropes and drops him with a back elbow. Edge escapes a headlock and shoots Eddie to the ropes but Eddie shoulder tackles Edge down. The two wrestlers crisscross and Edge monkey flips Eddie across the ring. Edge starts working Eddie’s left arm with a hammerlock as the crowd chants “Eddie sucks”. Eddie pushes Edge into a corner and lands some shoulder thrusts to Edge’s gut. Eddie wrestled Edge into the ropes and then lands a hotshot from the ring to the outside. Back in the ring, Eddie covers and uses the ropes for extra leverage but only gets two. Eddie goes for an Irish whip but Edge reverses it and hits a BIG back body drop. He follows with a dropkick and a scoop slam/running elbow drop combo for a two-count of his own. Edge goes back to working Eddie’s left arm but Eddie escapes thanks to some kneelifts and an enzuigiri. Edge kicks out of a cover off a suplex so Eddie applies a chinlock. Edge tries fighting out but Eddie regains control. Edge manages to reverse another Irish whip and hits a scoop powerslam. he climbs the top turnbuckle but Eddie cuts him off and hits a top-rope superplex. One, two, Edge kicks out.

Eddie gets up first and lands some elbows to Edge’s head. Edge reverses another Irish whip and lifts Eddie onto his shoulders in the electric chair position. Edge drops Eddie throat-first on the top rope and then clotheslines him to the floor. Then he uses that downtime to pull a ladder out from under the ring. huge pop for the ladder appearing. Edge charges at Eddie using the ladder as a spear but Eddie ducks and Edge hits the ref instead. Eddie takes advantage with a chair-shot to Edge’s back.

Eddie tosses Edge into the ring and lands a nasty chair-shot to Edge’s ribs. He goes to capitalize with a frog splash but Edge rolls out of the way. After a commercial break, we return to see Eddie stomping on Edge in a corner. Eddie sends into the ropes and then jumps onto his back for a backpack sleeper hold. Edge sinks down to a seated position as we get a replay of the first ref (there’s a second one now) being hit with the ladder and Edge hitting a Spear during the commercial break after getting basically a visual seven-count on Eddie. Back in the present, Edge fights out of the chinlock and lands a half-nelson facebuster. One, two, Eddie kicks out. Edge climbs the turnbuckle but Eddie cuts him off and hits a picture-perfect super Frankensteiner. Another cover and another kick-out. Eddie attacks Edge’s right arm and lands more jabs to Edge’s head. he goes for a rope-assisted lucha arm drag. Edge counters with a Batista Bomb. Edge brings the ladder into the ring but Eddie dropkicks it into him before he can use it as a weapon. Eddie introduces a second latter to the match and then hits an uppercut that causes Edge to fall backwards onto one ladder. Eddie sandwiches Edge between both ladders and then hits a springboard tope con hilo. High risk and…high rewards, I guess? Eddie pins Edge on the ladder but only manages another two-count.

Eddie sets one of the ladders up near a corner and climbs it. Edge wakes up and climbs the other side of that same ladder. The two trade punches atop the ladder. Eddie looks like he might fall off. Then he hits back and Edge starts staggering. Eddie smashes Edge’s face into the top of the ladder…and then dives off. Diving sunset flip powerbomb. Wow! Sick move! Eddie crawls over for a pin. One…two…th – Edge kicks out. Eddie props the ladder up in the corner and places Edge against it. He charges for an attack…and Edge counters. Back body drop into the ladder. Edge sets up the other ladder and climbs it. Eddie gets up and climbs the same ladder from the other side. More punches are exchanged atop the ladder. Eddie tries escaping by tightrope walking across the top rope but Edge smashes his face into the ladder. Then Edge traps Eddie’s head. And plants him with an Edgecution DDT off the ladder. Eddie gets driven head-first into the canvas. One, two, and three! Edge wins!

That was easily one of the best ‘free throwaway’ matches in WWE history. It had minimal build based on wins and losses (wow, what a novel concept) and was put on free TV as a means of getting people to watch the regular SmackDown shows. It was incredibly successful. If matches like this happened on SmackDown today, the show would be far more popular and way less skippable. It’s not GOAT-level or anything like that, but there’s still something about it that makes it more competitive, more believable, and more exciting than most of what has been shown on SmackDown in the decades since it took place.

The match wasn’t as rigid, copy-and-paste, or predictable as most modern WWE matches are. The pacing changed throughout the match. Eddie and Edge moved at different speeds, which made sense given the size difference between them. It was clear that Eddie was controlling the match. As the heel, he did the more complex stuff and built the heat around Edge’s bigger moves. He let Edge make his comeback with simpler moves at first but then Edge started landing bigger and more complex moves the longer the match went. He attacked Edge’s head to take advantage of a previous concussion and made liberal use of weapons to compensate for his lack of raw power compared to Edge.

But even though he was the heel here, Eddie was very much the superior wrestler. He was quite a few steps ahead of Edge throughout the match. The smoothness of Eddy’s execution was something else. He hit every move perfectly, including his early suplex, the super Frankensteiner, and the diving sunset powerbomb. And once that big spot happened, it became much harder to actually boo Eddie. He wasn’t just throwing wild moves without rhyme or reason; he was trying every trick he could to beat Edge. If he couldn’t out-power Edge then he’d find a cheap way. And that cheap way came in the form of him going to his lucha roots and relying on technical wrestling and exploiting weaknesses. By the end, Eddie was wrestling so well that he was less a heel and more a babyface on equal footing as Edge.

And even though Eddie was in control for about 70% of the match, he did exactly what he was supposed to. The match was about elevating Edge and Eddie did just that. He tried every possible angle, strategy, and trick to try and stop Edge’s push forward but it wasn’t enough. In fact, Edge’s comeback, short as it was, came from Edge using Eddie’s own momentum against him. Eddie had tried another ladder trick but Edge countered into a body drop that sent Eddie into the very ladder he setup. From there, all Edge needed was one more high-risk high-spot to seal the deal and beat Eddie once and for all.

Also, believe it or not, the commentary here was great. Michael Cole wasn’t just tolerable here; he actually called the match with enthusiasm. He quickly and professionally explained why this match was happening and what it meant to both Eddie and Edge. Tazz gave credibility to what Edge and Eddie did in the ring and used his own experienced as a wrestler to sell how well both guys were weakening each other. And both of them used this match as an example of why viewers should watch SmackDown without their shilling coming across as ham-fisted or inorganic.

The story wasn’t deep, the grappling was limited, and one wrestler was miles ahead of the other. And yet, this match was wildly entertaining. It never went off the rails, nor did it have any excessive action that felt out of place in such a high-impact match. It had a simple premise: two wrestlers settling a score in an almost fight-like setting with escalating risks and greater impact as the match wore on. It didn’t feel like a modern ‘rollercoaster’ match with constant peak-valley-peak-valley structure; instead, this match started off quickly and light and then gradually built towards a closing that was slower and heavy. And it benefitted from having a hot crowd that didn’t really die down and commentary that actually made the contest worth watching instead of encouraging viewers to press the MUTE button.

This is a great match for any fan of Edge’s, Eddie’s, or SmackDown’s in general. Obviously both guys had better matches than this one, but the fact that they could pull off stuff like this on a random, throwaway episode of SmackDown without much build showed how talented they were. It was nice seeing two guys not at the top of the card getting the chance to show what they could do. As such, it shouldn’t surprise anyone that both of them would reach the very top of the same card within three years of this match taking place.