It’s time to review the WWE NXT “Halftime Heat” show that took place on Sunday night at around 8pmET during halftime of the Super Bowl. It aired live on WWE Network, Youtube, Facebook, Twitter and elsewhere. I’m watching it on demand on WWE Network.

The event took place at the WWE Performance Center in Orlando with a few hundred fans in attendance. Some of the NXT wrestlers were part of the crowd because I noticed Shayna Baszler there. As we reported earlier last week, the crowd was going to be made up of the friends, family and staff of the people that work at the Performance Center. Here’s a look at the set. 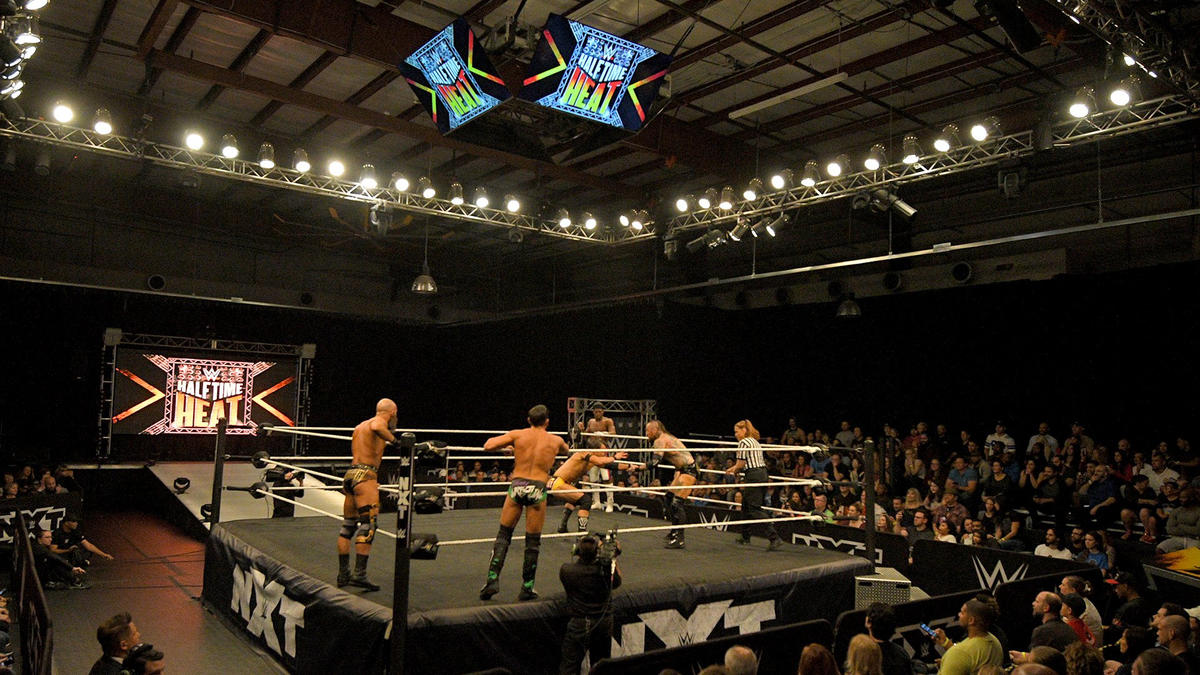 The entrances took place for the face team: Aleister Black was out first. Ricochet was the next man up for the face team. Velveteen Dream was the last man on the face team with the fans giving him the biggest ovation. The announcers for the match are Vic Joseph and Shawn Michaels, who is one of the guys that helps run NXT with Triple H. They were shown on camera.

The heels made their entrances first with Adam Cole of the Undisputed Era without his buddies in the stable. Johnny Gargano, the North American Champion, was up next. The last man to be introduced was the NXT Champion Tommaso Ciampa, who carried his title “Goldie” in his hands on his way to the ring.

There were “Johnny Halftime” chants as the match began and also “NXT” chants. Gargano started with Ricochet with Gargano hitting a headscissors, Ricochet landed on his feet, headscissors by Ricochet and a dropkick. That was sweet. Gargano with a roll through kick to the head of Ricochet and Cole tagged in. Ricochet broke free to tag in Black, who kicked Cole down. Black with knees to the ribs, elbow to the head and a jumping knee to the face of Cole for a two count. Cole hit a knee on Black to break free leading to Ciampa to enter the match. Dream tagged in with a running shoulder tackle on Ciampa two times and he was in a three point stance like a football player, so Ciampa just kicked Dream in the face. Nice punt! Dream with a jumping double axe handle off the turnbuckle on Ciampa and Dream knocked Gargano down. Black, Ricochet and Dream all did some poses in the middle of the ring leading to a lot of cheers. Ciampa whipped Dream into the ring post. The director missed it, but we saw the end result. Ciampa hit a running knee to Dream to put him down. Back in the ring, Ciampa slapped a chinlock on Dream, Gargano tagged in and hit a slingshot Spear on Dream for a two count. Cole tagged in to do his “Adam Cole bay bay” yell. Cole went for an attack on Dream off the middle turnbuckle, but Dream hit a superkick to stop him.

Ricochet got the tag with a kick to Cole, then a headscissors takeover by Ricochet to Ciampa and Ricochet hit a neckbreaker on both Ciampa and Gargano. Ricochet hit a 619 against the turnbuckle on Cole, then a jumping back elbow and a standing moonsault by Ricochet got a two count. Black tagged in with a running forearm, then a chop to the chest and a running kick. Black with a moonsault off the ropes to take out Gargano and Ciampa at the same time. Black hit a moonsault off the ropes onto Ciampa and Cole on the floor. Gargano with a suicide dive. Dream up top and he jumped onto two of the heels. Ricochet dropkick on Ciampa. Ricochet with a somersault dive over the top onto Ciampa and Cole. Black back in the ring with a bridging German Suplex on Gargano for a two count. Michaels said he was breaking a sweat because these guys are unbelievable. He’s right about that. Dream tagged in, he hit a clothesline on Gargano. Ricochet got back into it with a moonsault on Ciampa. Gargano back into it with a spear into a DDT on Ricochet. Dream followed up with a headlock into a spinning DDT of his own for a two count. The fans chanted “this is awesome” for them. Ricochet tagged back in with a kick on Gargano, but Gargano came back with a clothesline. Cole tagged in, Ricochet with a superkick, Gargano was still in the ring, Ricochet with a Standing Shooting Star Press on him and Ricochet went for a moonsault off the ropes leading to Cole hitting a superkick right to the head. They did that spot before it was great then too. Ricochet got a surprising rollup for two. All six guys went into the ring for a showdown leading to a slugfest between all of them. Black stomped away on Ciampa and Ricochet kicked Cole on the top rope. Dream was on the floor. Reverse rana by Gargano to Ricochet, Black with a knee to Gargano, Ciampa clothesline to Black and Dream and Ciampa did a suplex spot over the top to the floor. Cole with a Canadian Destroyer on Ricochet (Joseph called it a Panama Sunrise) for a two count. That was an awesome nearfall. The heel trio were in the ring with Ricochet led to three superkicks to the head at the same time with Black making the save. Dream got back into it against the three heels, but Cole and Gargano hit him with a superkick. Black got back into it, so Dream kicked Ciampa, Cole accidentally kicked Ciampa and Black kicked Ciampa followed by a Black Mass kick to Gargano. Dream hit the Dream Driver on Ciampa. Black with a Black Mass Kick to Cole. Dream with a Dream Driver to Ciampa. Ricochet up top and he hit a 450 Splash on Cole. Dream up top and he hit a Purple Rainmaker elbow smash on Cole for the pinfall win at 16:13. 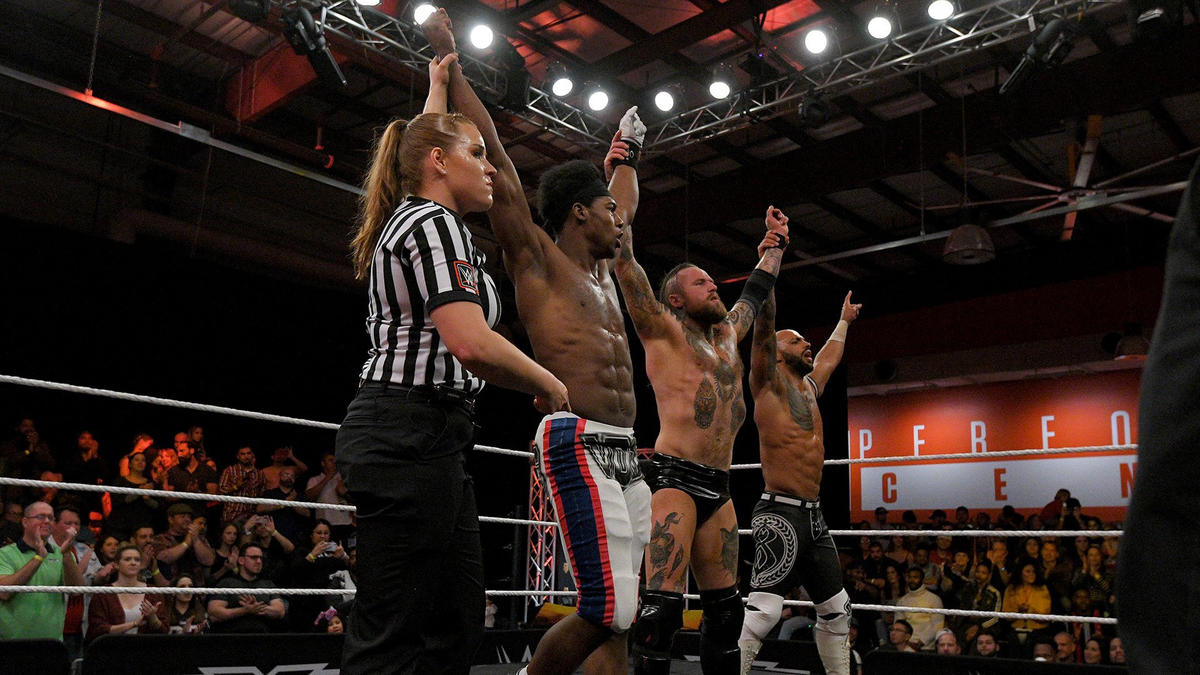 Analysis: ****1/4 That was an outstanding tag team match as expected. The action was so crazy especially in the last few minutes where it was tough to keep track of who the legal men were. What I liked about the match was that it was a NXT style long tag team match where you didn’t see an extended period where guys slap on chinlocks for five minutes to pass the time. I like the way this was booked with the heels looking like they would get the win with their triple team attacks, but Black and Dream got back into it leading to the faces getting the win. Dream getting the win on Cole makes sense since Cole is not a champion although if Dream pinned one of the champions that would have meant more too.

The trio of Dream, Black and Ricochet celebrated in the ring while the fans chanted “NXT” for them. The heels left the ring and were selling on the floor. Replays aired of the key spots in the conclusion of the match. The face wrestlers continued the celebration as the show came to a close.

You can watch the full match at the link below during the last 25 minutes of the Youtube broadcast.

It was a good broadcast showcasing some of NXT’s best wrestlers. I thought Michaels and Joseph did well on commentary with Michaels marking out for a lot of the cool moves while also putting over the talents as six of the best wrestlers in the world. Michaels has a lot of credibilty as one of WWE’s best wrestlers ever, so when he says that, it means something.

I hope this becomes a regular thing for WWE during Super Bowl halftime because it’s definitely a nice alternative to what are usually boring halftime shows.