It’s the first day of fall depending on where you live in the world, which means the summer weather might slowly going away. At least that’s what they say. Here in southern Ontario, Canada it’s still summer shorts weather for at least this week and then after that, it’s probably over. I don’t mind because I’m a fall season guy. The fall season in WWE is not necessarily a hot time for them, but they do have Clash of Champions coming up this Sunday.

From the WWE.com preview of this match:

Last Monday, Keith Lee was on the verge of earning a potential WWE Championship opportunity in his battle against Drew McIntyre, until RETRIBUTION made their presence felt. However, The Limitless One’s championship dreams are not dashed. Lee will get another crack at McIntyre this Monday on Raw. If he can defeat the WWE Champion, and Randy Orton is still unable to compete on Sept. 27 at WWE Clash of Champions after being on the receiving end of three Claymores, Lee will challenge for the WWE Title. Will Lee make the most of this golden opportunity?

My gut feeling here is that Randy Orton is going to show up to attack both guys, which leads to a DQ finish again. Sadly, WWE seems to go to that route often with Keith Lee matches to protect him.

When Orton took out McIntyre with the three punts a few weeks back, Drew sat out one Raw and then came back for a surprising attack. I think that’s what will happen here. Perhaps it will even led to Lee pinning McIntyre after the attack with Keith taking advantage of the situation not because he’s a bad guy, but because if Keith wins then he might challenge for the WWE Title. I guess it’s possible that WWE does a triple threat Ambulance Match at Clash of Champions.

The other option is that Retribution attacks and it’s another DQ. That’s entirely possible. Here are the results of Keith Lee’s first five Raw matches.

Sept 14 – No Contest vs. Drew due to Retribution

Aug 31 – Triple threat loss when Rollins got pinned by Orton

Lee did beat Orton clean at Payback on August 30, so that’s two pinfall wins for him and then three non-finishes, plus the triple threat match where Lee wasn’t pinned.

The Raw tag team division sucks and this match is an example of it. The winners of this match get to challenge The Street Profits for the Raw Tag Team Titles at Clash of Champions on Sunday. Here’s a quick breakdown of the teams.

Humberto Carrillo and Dominik Mysterio – I like the idea of these two young guys teaming because they are talented, athletic wrestlers. However, this is their first time teaming together and they are one match away from a title shot? Strange. Anyway, I think they’ll put on a good showing, but Carrillo is probably there to take the pin in this match.

Seth Rollins and Murphy – Seth and his disciple Murphy have had issues of late since Rollins got mad at Murphy for getting beat by Dominik in a their tag team match at Payback and then Murphy lost to Dominik on Raw. My feeling is that the “tough love” from Rollins will work and that this team is going to win.

Andrade and Angel Garza – These guys can’t get along, but the story is that Zelina Vega is out of the picture now, so maybe they can get it together? I don’t think so. I expect them to get into a fight and lose the match.

My prediction is that Rollins and Murphy win. I also think they might beat the Street Profits for the Raw Tag Team Titles at Clash of Champions because I think WWE is going to want Rey and Dominik to beat them for the Raw Tag Team Titles. I would save Rey and Dominik winning the titles until WrestleMania, but I doubt WWE is going to have them take that long.

* Braun Strowman and the undefeated Dabba-Kato clash in Raw Underground 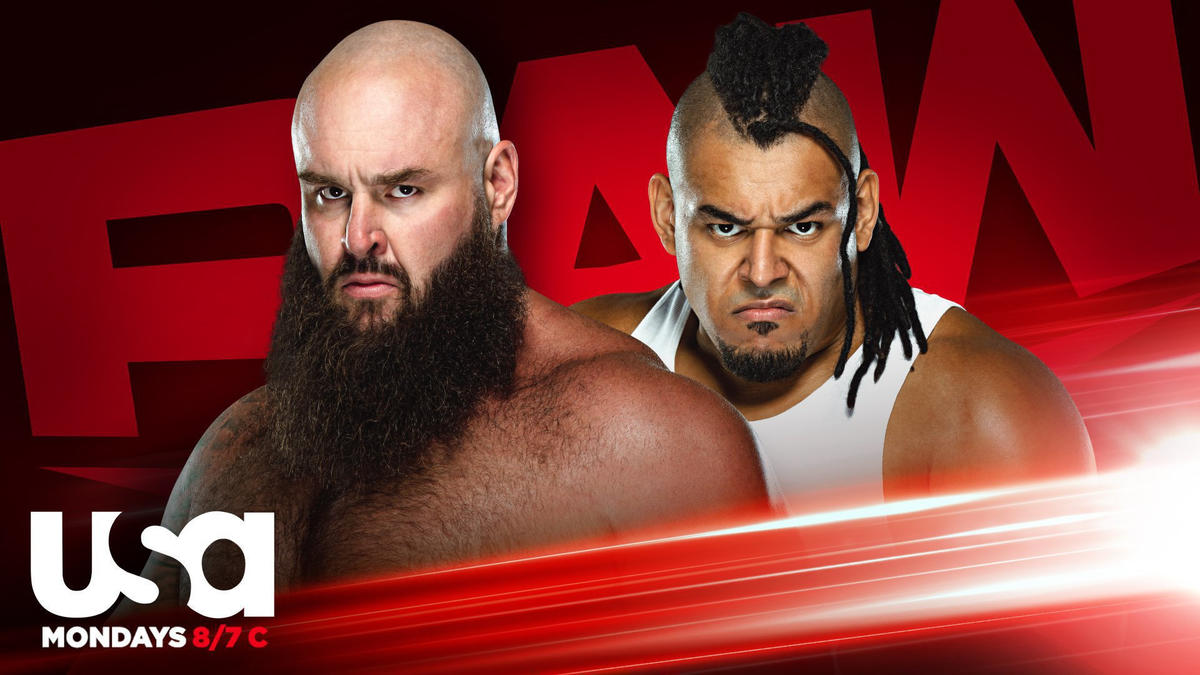 The Raw Underground portion of Raw has been going on for a few months and they finally used it to build to a big match that people might be interested in. One thing we know about Raw Underground fights is that they don’t last very long. I’m going to go with Strowman winning, but I can see it leading to a match in the ring as WWE tries to build up Dabba Kato into a new monster in the company. I’m not sure what Kato would look like in a regular match although he has been WWE for a few years.

I’m going with the Strowman win, but it’s certainly not a lock.

2. I really hope that there is a follow up to the sloppy ending to the Asuka vs. Mickie James match last week. As Mickie talked about in an interview last week, the referee of the match thought that Mickie might have been hurt, so he called for the bell even though Mickie wasn’t pinned, nor did she submit. It was not an angle, but WWE could turn it into an angle with Mickie complaining about it (maybe it can lead to her going heel) or simply leading to another match. I realize that Asuka beating Mickie was likely the plan, so what’s the big deal? I think it’s important to follow things up because otherwise fans are confused. With that said, I’m not that interested in Asuka vs. Zelina Vega as a Women’s Title match even though they might do it at Clash of Champions.

3. Two people that WWE has forgotten about that I think should be doing way more on Raw: Bianca Belair and Mustafa Ali. I know Ali is having great matches on Main Event, but it’s not like WWE promotes that show. Belair hasn’t had much to do since she debuted after WrestleMania and I think that’s a big mistake. I really hope both of them can find a role soon.

The current lineup for WWE Clash of Champions on Sunday looks like this:

Other titles that will be added to the card: Asuka’s Raw Women’s Title, Raw Tag Team Titles held by The Street Profits and Bobby Lashley’s US Title. Since they are all Raw titles, we should find out their title defenses tonight.

My WWE Raw review will go up on Tuesday morning.