The next WWE NXT Premium Live Event is called In Your House taking place this Saturday, June 4th and one of the big matches taking place will be a six-man tag team match involving Tony D’Angelo’s group facing off against Legado del Fantasma.

The rivalry between Santos Escobar of Legado del Fantasma and the “Don of NXT” Tony D’Angelo (along with his mafia group) has been going on for several months now. When they met in singles action on the May 17 edition of NXT, Escobar beat D’Angelo thanks to some help from his Legado friends.

This week on NXT, Santos and Tony had a meeting on a yacht. They agreed to have a six-man tag team match with D’Angelo teaming up with Channing “Stacks” Lorenzo & Troy “Two Dimes” Donovan in a six-man tag team match against Escobar, Joaquin Wilde & Cruz del Toro. The stipulation is that if Tony’s team loses then they must join Legado del Fantasma and if Escobar’s team loses then they must join Tony’s “family.” It’s a stipulation that will lead to a significant change for the two groups depends on who loses the match.

That six-man tag team match is the only match at In Your House that isn’t a title match. The rest of the card has titles on the line.

There was an NXT Women’s Championship Summit that was another way of making two women’s title matches official.

Mandy Rose (leader of the Toxic Attraction group) has been the NXT Women’s Champion for over 200 days and she’s going to put her championship on the popular, unique and likable Wendy Choo, who was dressed in a cow costume on last night’s NXT. It’s an interesting dynamic since Rose prides herself on being a beautiful, strong woman, yet Choo is the opposite like that since she dresses in a unique and acts like a child at times.

The popular team of Kayden Carter and Katana Chance made it clear that they were going to leave with the Women’s Tag Team Titles when they face the champions Gigi Dolin & Jacy Jayne on Saturday.

During the NXT Women’s Championship Summit on NXT last night, contracts were signed to make the two title matches official. After the signing, there was a brawl that ensued with Chance & Carter hitting dives onto Dolin & Jayne on the floor. That left Rose along with Choo, who got an assist from Chance & Carter. Choo went up top and hit the “dreaded” sleepy elbow drop to put Rose through the table. The segment ended with Choo, Carter and Chance all holding up titles to show that they could leave In Your House as champions.

The other three title matches were all set several weeks ago. 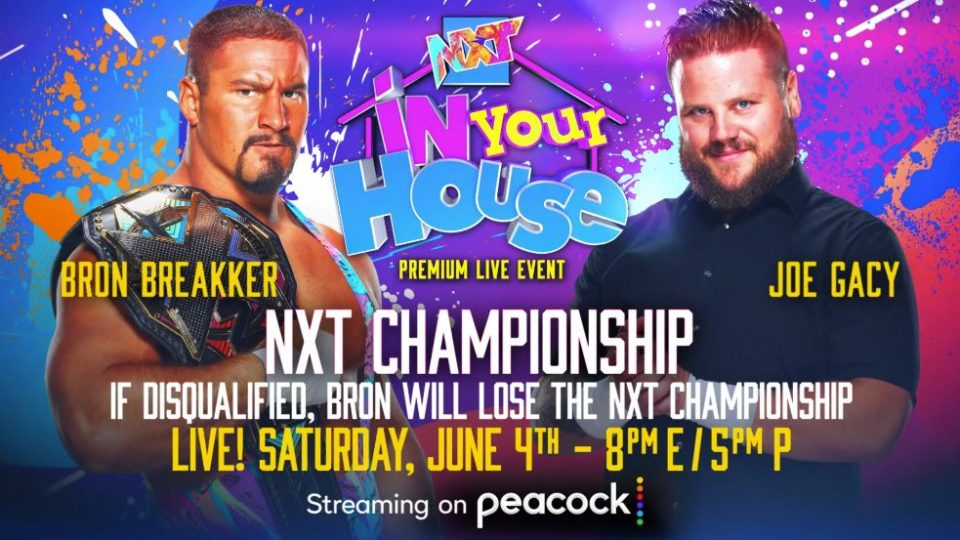 NXT Championship: Bron Breakker (c) vs. Joe Gacy – Breakker loses the title if he is disqualified.

You can watch NXT In Your House streaming LIVE Saturday, June 4, at 8 ET/7 CT on Peacock in the United States and on WWE Network everywhere else.