The WWE NXT 2.0 and NXT UK brands will be competing at Worlds Collide and now it’s official that there will be unification matches between multiple champions on the two brands.

The reason for the championship unification matches is that WWE is ending the NXT UK brand and replacing it with NXT Europe in 2023. It hasn’t been announced when NXT Europe will officially begin.

During the August 23 episode of NXT in Orlando, the NXT Champion Bron Breakker was in the ring with NXT UK Champion Tyler Bate. It should be noted also that Bate’s title win hasn’t even been shown on NXT UK yet, but WWE is moving ahead with spoiling it for the fans on NXT TV. The two men exchanged words in the ring while agreeing to a title unification match. Each man held up their title in the air to show they are a proud champion. 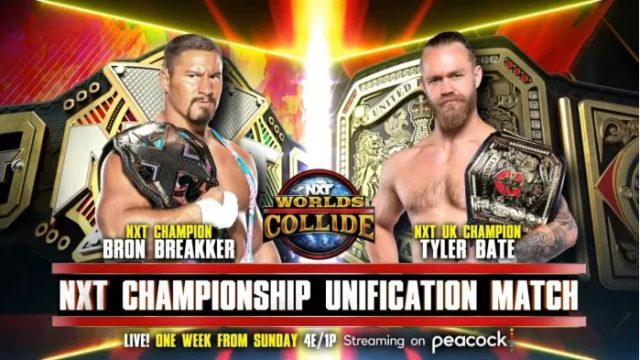 “Mandy, you are wrong. You are not the most dominant Women’s Champion. That would be me!”

It will ALL be on the line at #NXTWorldsCollide!#WWENXTpic.twitter.com/5O3bk4Rawt

As this week’s episode of NXT concluded, the wrestlers in the two unification championship matches signed the contracts to make their matches official.

You can watch NXT Worlds Collide on Sunday, September 4, at 3 p.m. ET, streaming live exclusively on Peacock in the United States and WWE Network everywhere else!