Top Dolla is a part of the popular Hit Row group that made their return to WWE on Smackdown and now he’s opened up about his fresh start in WWE with Triple H in charge.

The returns have been happening often since Triple H took over the role of Head of WWE Creative in late July. We saw Dakota Kai return at SummerSlam, Karrion Kross came back with Scarlett and Dexter Lumis was shown in the crowd on Raw. They were all released when Vince McMahon and John Laurinaitis were calling shots, but Triple H has brought them back.

Hit Row was a foursome for most of their NXT run and when they got called up to Smackdown as part of the October 2021 draft. One month later, all four of them were gone including Isiah “Swerve” Scott, who went on to sign with AEW and have success there as Swerve Strickland

This past Friday on the August 12th edition of Smackdown, Hit Row made their return to WWE. The trio of Top Dolla, Ashante “Thee” Adonis and B-Fab appeared for a tag team match. Dolla and Adonis went on to defeat a couple of local wrestlers in a quick fashion. After the match, the Hit Row trio referred to themselves as “The OG-3” meaning they were part of the original Hit Row group.

Top Dolla appeared on Busted Open Radio to talk about the group’s WWE return while also revealing that even after the release, he was still in touch with Triple H.

“Even when Hunter was not in NXT, even when we went up to SmackDown, even when we got released, I never stopped talking to Hunter. We had talked a lot already about hopefully working together in the future. I sent him clips of the stuff we were doing. I sent him clips from GCW, ACW in Trinidad, and clips of me and [Ashante] working together as a tag team, letting him know the band was still together.”

“Swerve being added to Hit Row was a Hunter call. Hunter added Swerve to Hit Row because he already saw what we had been doing for a year and was like, ‘This is a good opportunity to debut a faction instead of a tag team with a manager.’ It was cool, it was a good idea, it clearly worked, but Hunter saw it when it was just the three of us. He knew what we were capable of from jump.”

The former NFL player went on to say that there were plans in place to return about a week and a half before their Smackdown appearance.

“When he gets the reigns and is like, ‘I want to bring my guys back,’ we were one of his top priorities to get back because he knew what we could bring to the table. About a week and a half ago, he hit me up and was like, ‘How are the rest of the guys?’ ‘We’re good.’ None of us wasted time this whole time.”

“I was on tour, I did shows in New Orleans and LA for music, wrestled at GCW, MCW, ACW. [B-Fab] lives in Columbia, so she was doing her thing down there, modelling. [Ashante] was doing acting stuff in Atlanta and LA, model stuff. We never stopped training and being ready. He was like, ‘How fast can I act and get you guys here?’ This was on Wednesday of last week. ‘If you really want us, we can be there tomorrow.’”

“We ended up having a Zoom call with him, the three of us, and planned out what would happen the next couple of days. This week, we got physicals and contracts. I don’t know how the story broke that I was going to be there, but I knew it wasn’t somebody with all the information because they didn’t know [B-Fab] was going to be there, which we played into.”

“When Me and [Ashante] came through the curtain, you thought it was just going to be us, and we had [B-Fab] come through last. ‘Yeah, she’s here too.’ She’s an important part of the group.” 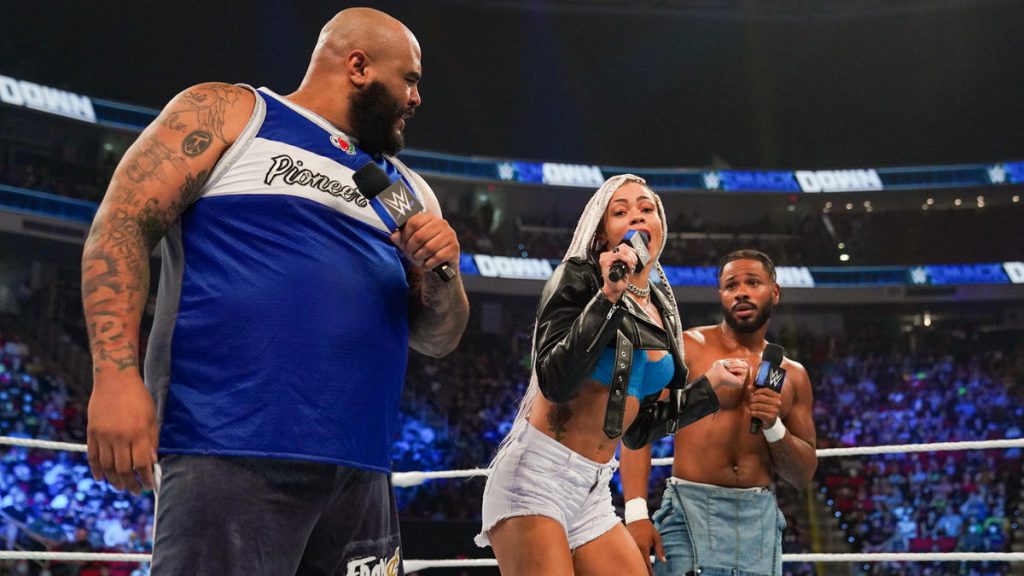 The 32-year-old big man of the Hit Row was flattered that Triple H reached out to them considering how many wrestlers WWE could bring back.

“It was a really cool process because Hunter…there are a million people Hunter could run back. The list is hundreds of people long that are talented performers that were released in the last five years that are still young and able to do these things. A million people he could bring back, but he called us. That made me feel, not just special, but grateful. That’s why I will sing his praises to the high heavens.”

What Top Dolla was referring to was the label put on him that he was a “heat magnet” during his past run in WWE. He went on to say that Triple H has given him a clean slate.

“In the conversation I had with Triple H, he was like, ‘I don’t know what happened before, and to be honest, I don’t care. It’s a new place. I want you to understand that you have a clean slate. There are no hard feelings on this side, I hope you come with no hard feelings on your side.’”

“It was a breath of fresh air. I was down when we got released. Hit Row was hotter than anything in wrestling. Period. I don’t care who you are, get your feelings hurt if you want. When we got release, I feel we had something great and it turned into ashes in my hand. It made me stop watching wrestling for the first time in my life. I went eight months without watching wrestling.”

Top Dolla also mentioned that Triple H knows the real him from when he hosted the A&E show “WWE’s Most Wanted Treasures” when he used his real name A.J. Francis.

“I told Triple H ‘thank you,’ it’s probably the only word he thinks I know, because I told him ‘thank you’ like six times yesterday. ‘Thank you so much.’ He knows the real me. He did Most Wanted Treasures with me. He saw me in a non-wrestling sense. He saw me not with ‘the boys in the locker room’ sense. He’s seen me and knows how I really am as a person. He knows that all that talk about me being hard to work with and being difficult is bullshit. He was willing to put himself and his neck on the line to be like, ‘these guys are talented. I want them back.'”

CM Punk Undergoes Surgery Following Injury At AEW All Out