There is a double taping today in Manchester, England for tonight’s WWE Friday Night Smackdown show and Monday’s Raw.

Packed house at #WWEManchester tonight for the SmackDown and Raw tapings! pic.twitter.com/ycVqGK8Id4

Smackdown began with “King” Baron Corbin talking trash about Roman Reigns, who was his scheduled opponent.

During a New Day interview before their match, Big E had a funny line: “If we don’t win the Tag Team Championships for the seventh time tonight – how are we going to catch up to Charlotte Flair?”

Kofi Kingston got the pinfall win for his team with the Trouble in Paradise kick. It is the New Day’s 7th tag team title reign. WWE posted this spoiler news on their site along with this photo of the new champions. 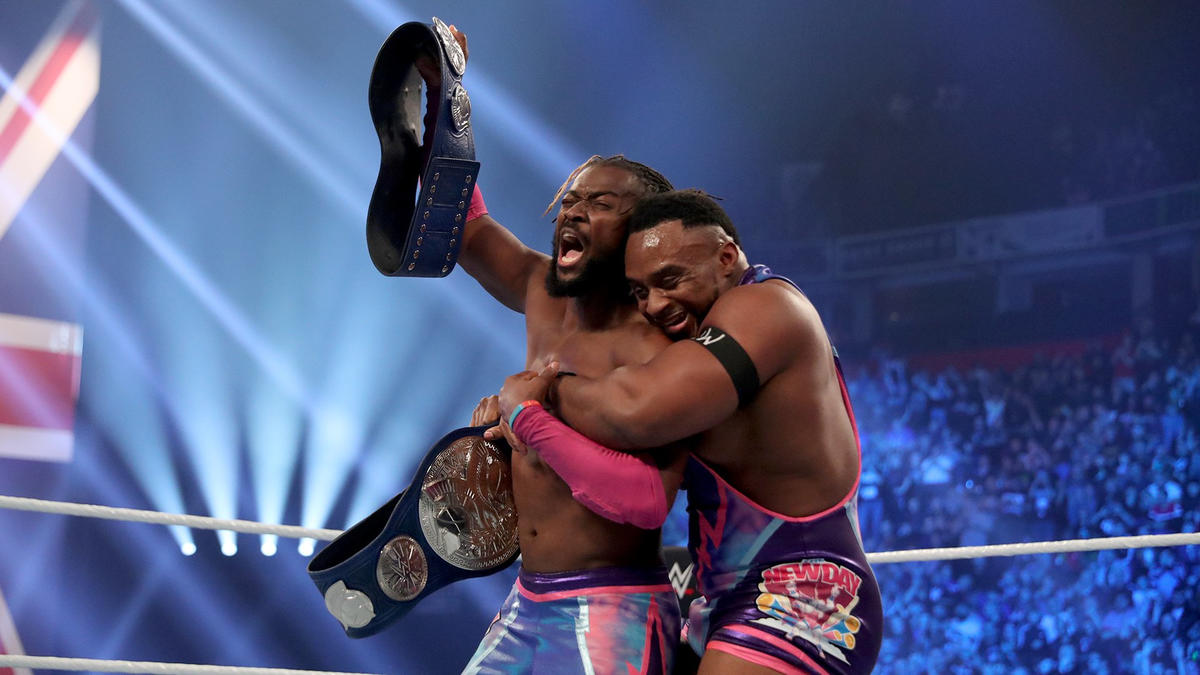 The four man Imperium group led by WWE UK Champion Walter attacked the Heavy Machinery team of Tucker of Otis. Some of the Smackdown locker room appeared to chase Imperium away. It was said that Walter got a big pop from the crowd.

The report noted that the heel team of Nakamura and Cesaro got the win thanks to some distractions from Zayn. Daniel Bryan watched the match from the ramp. Bryan declined to celebrate with Nakamura and Zayn, who want Bryan to join them.

It was noted by GMS that Banks has a new remixed theme song with part of what Snoop Dogg rapped for her at WrestleMania 32.

After the match was over, Bayley went after Cross and then NXT Women’s Champion Shayna Baszler attacked Bayley because they’re in a match at Survivor Series. It doesn’t say much about what happened, but most likely Baszler stood tall after the attack.

Brooke got the win for her team with a Swanton Bomb on Sonya Deville. As a result of the win, Brooke and Carmella will be on Team Smackdown in some Survivor Series elimination match.

It was not a clean win for Corbin. The team of Dolph Ziggler and Robert Roode showed up to help Corbin beat Reigns.

Tyson Fury, who is from England, entered the ring. Fury called out Braun Strowman, who he defeated at Crown Jewel. Fury said he wanted to form a tag team with Strowman.

The end of Smackdown saw Strowman and Fury celebrate together on the stage.

Fury calls out Braun Strowman and says he wants to form a tag team with him!

The B Team come out and get flattened by both men. Fun end to SmackDown although I expected something a bit more noteworthy… #WWEManchesterpic.twitter.com/FDoXwMvlpk

That’s all for the Smackdown spoilers. WWE is also taping Raw tonight, so I will do another post with those spoilers as well.

I will be back later this evening for the WWE Friday Night Smackdown review right here on TJRWrestling. Thanks for reading as always.