Paul Heyman really didn’t like what Logan Paul posted on Instagram and decided to call him out on it.

The main event of WWE Crown Jewel will see the Undisputed WWE Universal Champion Roman Reigns defending his two titles against Logan Paul. As the November 5th date approaches, the trash talk on television should escalate while also continuing on social media as well.

Reigns will return to WWE Smackdown on tonight’s October 28th episode and if there’s one thing we have learned in the last two years it’s that wherever Reigns goes, the “Special Counsel” Paul Heyman will be right by his side. Heyman is also called the “Wise Man” by Reigns due to his incredible knowledge of the pro wrestling business while also delivering some of the best interviews in the business.

Heyman is known for never being shy about speaking his mind whether it’s on the microphone or on social media. That’s why when Logan Paul posted a photo with his brother Jake Paul where Logan was holding a replica WWE Title, Heyman fired back with this comment on an Instagram story post.

“Hey, Look at The Douchey Little Kid with the Replica, Pretending to be Something to Be He’ll Never Be in Life!” 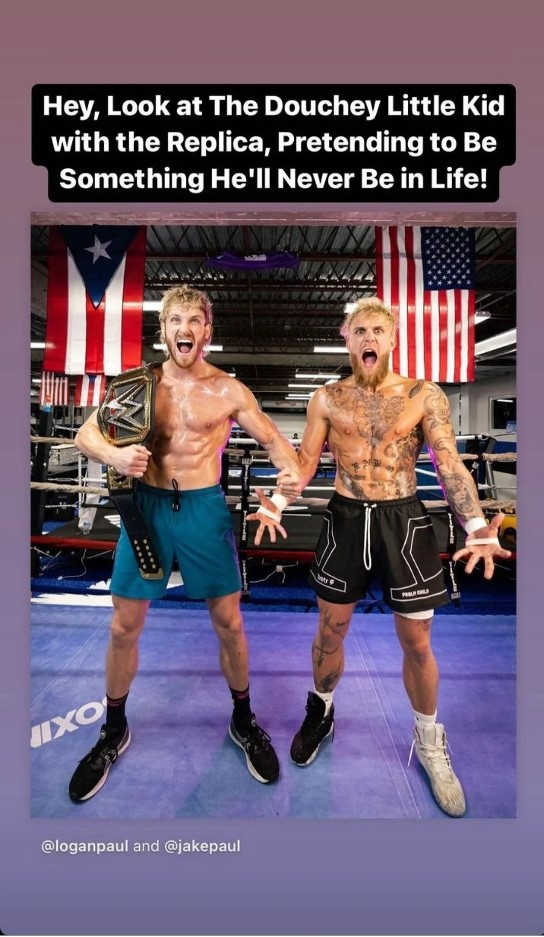 On the October 21st episode of Smackdown, Jey Uso of The Bloodline group tried to attack Logan in the ring even though fellow Bloodline member Sami Zayn told Jey that the “Tribal Chief” Reigns didn’t want anybody to attack Logan. Jey tried his best but failed miserably as Logan knocked him out with one punch to push the idea that Logan could do that when he faces Roman Reigns as well.

“He’s In The HOF! Sad!” – Ric Flair Hits Out At Former WWE Champion

Former WWE Writer On His Disconnect With AEW’s Darby Allin