The presence of new AEW merchandise for CM Punk has led to questions about what his status in the company actually is.

CM Punk’s last night on AEW television was September 4th at All Out pay-per-view in Chicago when Punk won back the AEW World Title from Jon Moxley. That win made Punk a two-time AEW World Champion, but there’s a very good chance that we may never see him on AEW television again.

At the All Out press conference, Punk went on a fiery rant against several of his colleagues that resulted in an alleged backstage fight that saw Punk, Kenny Omega, The Young Bucks and company producer Ace Steel suspended. Steel has apparently been fired due to biting Omega and throwing a chair at Nick Jackson, which caused a black eye. melee.

Recent reports have suggested that Punk won’t be back in AEW as rumors persist about a potential contract buyout. Since Punk suffered a major arm injury that required surgery, it’s unknown when or if he will ever wrestle again. It has also been reported that Punk got the “wrestling bug again” meaning he liked being back in pro wrestling after seven years away.

The ShopAEW website released its “Holiday 2022 Ornament” series. One of the listed items there is a limited edition “CM Punk 2.5 Inch Round Glass Ornament” with only 200 items for sale. Some of the other merchandise items are ornaments for Sting, The Young Bucks, Adam Cole, AEW World Champion Jon Moxley, Dr. Britt Baker, FTR and Danhausen.

The new CM Punk ornament can be seen below. 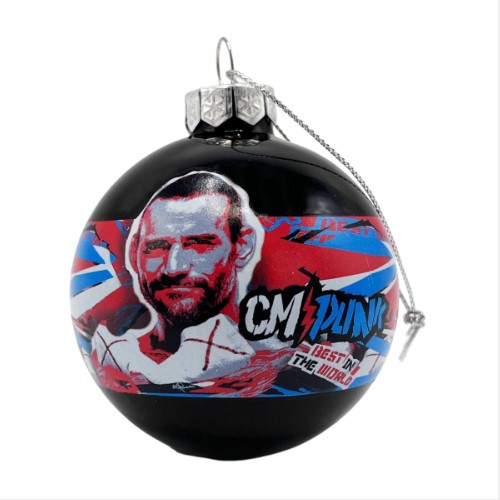 Even though Punk is likely never competing in an AEW ring again, it’s possible that these merchandise items were likely made and ordered months in advance before they were put on sale.

One of the people that Punk ranted about at the All Out press conference was his former friend Colt Cabana, who returned to the AEW ring on Dynamite earlier this week. Following Cabana’s return, it was reported that it was a “morale booster” in AEW because it likely means Punk is gone from the company.