There’s a new, live episode of AEW Dynamite on TNT (in the US) tonight. It’s an episode where AEW has sold some tickets for the show with about 10-15% of the building with fans so there will be close to 1,000 fans in attendance or something close to that. The tickets are for upper levels rather than around the ringside area, but at least we’ll get to hear some fan reactions.

They have advertised several things for the show this week as they head towards the All Out pay-per-view on Saturday, September 5. Here’s what we know about this week’s show. 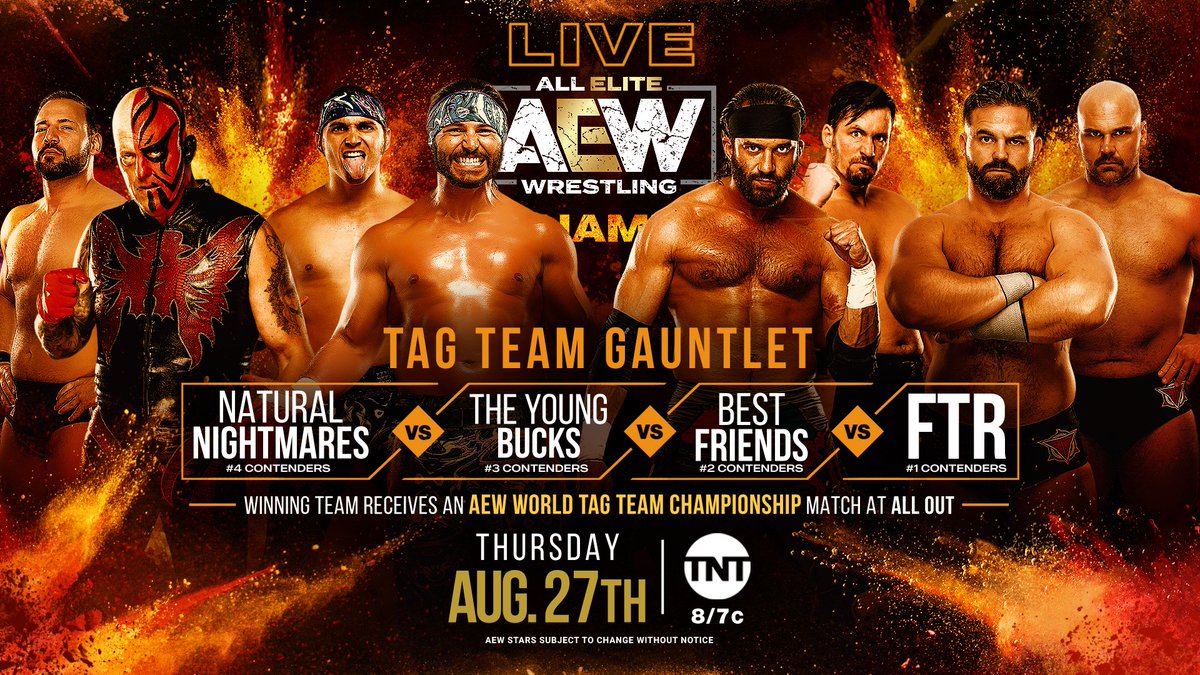 * Gauntlet Tag Team Match: #4 Natural Nightmares vs. #3 Young Bucks vs. #2 Best Friends vs. #1 FTR. The winners of that match will challenge Kenny Omega and Adam Page for the AEW Tag Team Titles at All Out 2020.

TJR THOUGHTS: I think FTR should win and will win. The Young Bucks winning wouldn’t be a bad thing, but FTR’s momentum should lead to them getting the title match and winning the titles.

TJR THOUGHTS: I feel like MJF is going to get the advantage in this segment.

TJR THOUGHTS: A win for either guy makes sense in terms of the storyline, but I would like to see Sammy win since he’s the younger guy.

* Chris Jericho will be on commentary.

TJR THOUGHTS: That should lead to us finding out who he’s going to face at All Out whether that’s a return match with Cody or some other opponent.

* An update on Cody after last week’s Dynamite when Brodie Lee dominated him to win the TNT Championship. Cody was also beaten up after the match as well.

TJR THOUGHTS: I think the team of Pentagon, Fenix, Butcher and Blade should win. Last week they got a pep talk from Eddie Kingston, so I expect Kingston be with them again.

TJR THOUGHTS: I’m not sure if Baker is 100% from the knee injury, but I think she’s close. This should lead into Baker vs. Swole in a singles match at All Out.

That’s the show as far as we know. They might mention more things on social media as well.

I will be back either later tonight or early tomorrow with the AEW Dynamite review.