Welcome back for some more Collective Thoughts. As far back as pro wrestling history goes, it has always pitted the good guy vs. the bad guy. It’s a simple formula that works to perfection because it feels like actual combat. We have always had that one person we didn’t see eye to eye with in our lives, although, we didn’t always have a ring to settle our differences in.

We have seen guys go from being hated heels to beloved babyfaces in a matter of months with a turn that had been storytelling at its finest. I don’t think The Rock would have been the star he was if he didn’t turn heel and joined the Nation of Domination in the dawn of the Attitude Era. Then, we have the guys that were heels by association, but slowly starting to see the error in their ways until they finally make a babyface turn. The most notable one is Batista turning on Triple H in 2005 and it leads to a Hall of Fame career for The Animal.

Since AEW debuted in 2019 (with Dynamite becoming a weekly show in October of that year), they have had moments of great and terrible storytelling. One of the bright spots is, of course, the long-running story of the relationship between Maxwell Jacob Friedman and his protege, Wardlow. 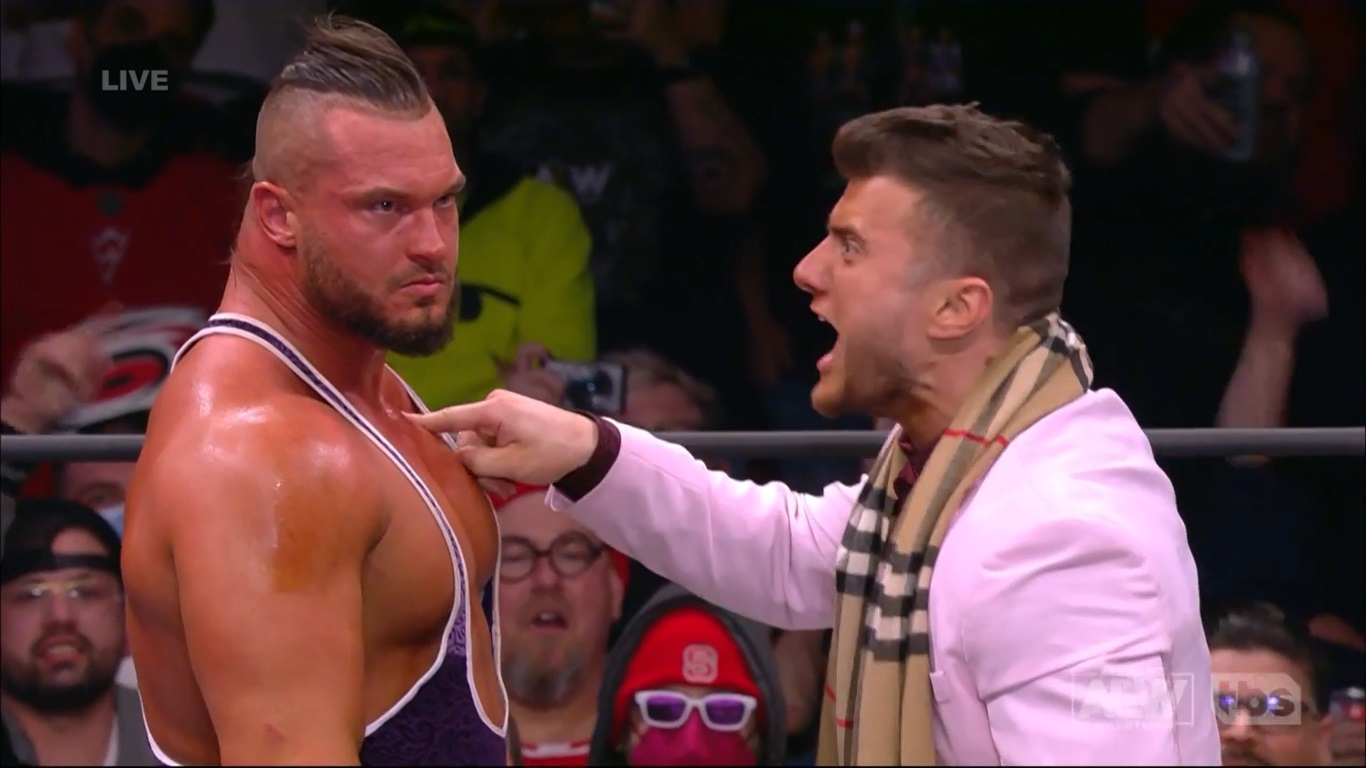 Wardlow has been a mainstay on TV for AEW since debuting with the company and has been by MJF’s side for most of his run. He has been used as a foil for opponents of Maxwell and has been asked to be in some pretty big spots for how early he is in his mainstream wrestling career. The first test was during the feud MJF had with Cody Rhodes, in which Max was trying everything he could to soften Cody up before their match. This led to Wardlow being put in a cage with Rhodes on an episode of Dynamite and all things being considered he did really well. That was a big spot for him, but he seemed to handle himself well and nothing glaring came through the screen.

They teased dissension between Wardlow and MJF early on in their run, but thankfully pulled that idea back a little bit. Wardlow has continued down that same path, finding himself fighting alongside MJF, Shawn Spears, and FTR as part of The Pinnacle over the last year or so. The crowd started to come around for him a little bit, but he had to start being featured before they would see any real results. That’s when the decision was made to start making his way towards his eventual turn.

Some could say that Wardlow should have been booked as the unbeatable monster from the start, but I do think the way he has come around has worked as well. Over the last few months, he has come out with only Shawn Spears by his side. It’s been a job guy, Powerbomb City, and leave. It is effective, especially with someone who looks like they could beat the hell out of you without breaking a sweat. Slowly but surely we have seen him run through people and butt heads with MJF consistently. Wardlow has reluctantly helped him, but we have all seen the writing on the wall. Wardlow played a role in MJF scoring a win over CM Punk in their first match on Dynamite, but it was the most conflicted we had seen him be towards his mentor.

Fast forward to Revolution last Sunday, and Wardlow once again played a role in an MJF vs CM Punk match, only this time he laid the ring down for Punk, effectively terminating his relationship with MJF. That was after he had already captured the Face of the Revolution “Brass Ring” in a Ladder Match and is guaranteed a TNT Title Match. It was a big night for Wardlow.

The biggest night of Wardlow’s career came the following episode of Dynamite, though. We have seen how dominant the guy can be and have seen how he can get it done in the ring. That is only one piece of the puzzle though. You knew Wardlow would eventually be asked to go out and cut the promo of his life and Wednesday was that time. When I started watching the promo live, I told myself that this was his moment to crush it or crumble. He talked about his past and how he grew up with a single mom and two sisters with little to no money. He was relatable right off the bat which is what you want in a potential star. He turned his anger toward Maxwell and told him that even though he was still under contract with him, he would not work for MJF anymore. Wardlow talked about everything he had been through since debuting before putting a bow on it by saying he will win the TNT Title. He had good intensity and fire with his words and made you sympathize when you needed to.

I don’t think it was the greatest promo of all time, but for the moment and how big it was, I thought he did a really good job. Now I want to see him conquer MJF. I want to see him win gold in AEW and it makes you want to root for him. Which is what you want in your next big babyface star. Wardlow still has a little bit to go as far as coming into his own and dominating the wrestling world, but he is off to a hell of a start.

What do you think of the ascension of Wardlow? Have you enjoyed his booking? What are some of your favorite Wardlow moments? Hit me up over @collectiveheel on Twitter and let me know your thoughts. I will be back next week with more WCW where we are suffering through the Vince Russo era, so I hope you can all join me there. Take care of yourselves, and more importantly, each other. I will be back soon enough with some more Collective Thoughts.