Hey Yo, welcome back TJR readers! Did you spend all day Friday trying to convince your family that you had unfinished business, and missed WWE Smackdown?

Perhaps you spent all day Monday buying every toothpick you could find, and missed Raw. Worry not for I have returned with another edition of the Top Ten Wrestling Stories of the Week

My list will only have 9 stories this week, as there is no way to put a number on the loss of Scott Hall. Hall tragically suffered complications from hip surgery this week, causing him to have three heart attacks. Hall was placed on life support until his family could be at his side and then passed shortly after his life support was discontinued. WWE announced his death at the start of Monday’s Raw From his run as Razor Ramon in the WWE to being a founding member of the NWO, Hall’s contributions to the wrestling world are well documented. Hall’s legacy will continue on through his son Cody Hall, who currently wrestles, as well as his daughter Cassidy. I would personally like to send my condolences to Hall’s friends and family, as Heaven says hello to the Bad Guy. (TJRWrestling)

Pete Dunne made his debut on Smackdown this past Friday, with a brand new name. During Smackdown, Ridge Holland and Sheamus were being interviewed backstage. Sheamus then said that they had another friend joining them, before stating that you may know him as a different name, but now his name is Butch. The former Pete Dunne then walked into the screen and joined Sheamus and Holland. Dunne’s name change went over on social media as well as anything new and different usually does. I for one think that as long as Butch can bring in his brother Luke and Jameson to manage him, he is going to be just fine. (TJRWrestling)

9. The Hardy Boys Compete on Dynamite

For the first time in almost three years, The Hardy Boys had a match on television. Matt and Jeff Hardy wrestled together this week on AEW Dynamite, successfully defeating Private Party. The Hardy Boys will now likely continue to team together in AEW. One would think that The Hardy Boys are likely destined to be AEW Tag Team Champions, assuming that they can learn how to ignore the referee and tag team rules of course.

The card for NXT’s next big event on April 2nd titled NXT Stand and Deliver, began to take shape this week. A five-way ladder match will be held for the North American Championship, with Champion Carmelo Hayes and Santos Escobar already being in the match. Tomasso Ciampa is set to face Tony D’Angelo, in possibly Ciampa’s last match before being called up to the main roster. Mandy Rose will defend the NXT Women’s Championship against Cora Jade. Imperium will defend the NXT Tag Team Championships in a Triple Threat Match against The Creed Brothers and MSK. Finally, Bron Breakker will try to regain the NXT Championship when he faces champion Dolph Ziggler. NXT Stand and Deliver is scheduled for the afternoon of WrestleMania Night One, meaning that by the time John Canton is done covering everything that day he will likely be Laying and Conserving. (TJRWrestling) 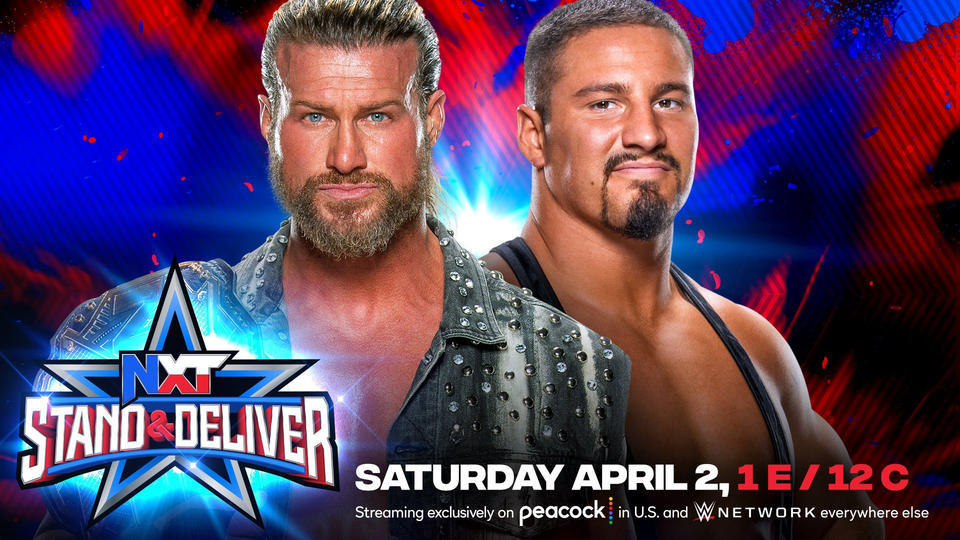 The Smackdown Tag Team Title Match is now set for WrestleMania 38. This past Friday on Smackdown, Rick Boogs was able to defeat Jey Uso in a one-on-one match. Due to this, Boogs and Shinsuke Nakamura will now challenge the Uso’s for the titles at Mania. The Raw Tag Title Match is still not official, but the Street Profits did challenge champions RK-Bro this past Monday on Raw. RK-Bro accepted the challenge, but then both teams were taken out by the former champions Alpha Academy. Whomever RK-Bro ends up facing at Mania (it’s most likely going to be a triple threat match), I am sure that Randy Orton is just happy that he gets to be in a match with his new best bud.

WWE may finally be holding another PPV across the pond. This week it was reported that WWE is planning on holding a PPV on Saturday, September 3rd from Principality Stadium in Cardiff, Wales. This would be the first WWE PPV in the UK since Insurrection way back in 2003. This year is also the 30th anniversary from SummerSlam 1992, that took place at the UK’s Wembley Stadium. Interestingly AEW’s All Out is scheduled to take place the same weekend as the UK show (Sunday, September 4), giving a new meaning to Labor Day for John Canton. (ITRWrestling)

That is the same weekend as AEW’s ‘All Out’ PPV.

5. Sharmell to be Inducted Into the WWE Hall of Fame

The WWE Hall of Fame is about to get a Royal upgrade. This week it was announced that Queen Sharmell will be inducted into the WWE Hall of Fame Class of 2022. Sharmell is best known for working along side her husband Booker T, when he was known as King Booker. As Queen Sharmell, Sharmell would often give interviews and help her husband win in matches. Sharmell also was apart of the Nitro Girls for WCW before joining the WWE, and was a part of TNA Wrestling from 2007-2009. Booker T will be inducting his wife Sharmell into the Hall of Fame, as Jenna Morasca was likely unavailable. (TJRWrestling)

4. Seth Rollins Still Has no Match at WrestleMania 38

WrestleMania 38 is in a little over two weeks, and as of this writing Seth Rollins is still not on the card. This past Monday, Rollins faced Kevin Owens in the main event of Raw. The stipulation of the match saw whomever wins getting to interview Stone Cold Steve Austin at WrestleMania 38. In the end Owens was able to hit the Stunner and pick up the win, leaving Rollins with nothing for Mania. It has been heavily rumored that Cody Rhodes will be making his return to WWE, and will be the one who faces Rollins at Mania. If Rhodes does not make a surprise return, then WWE is going to really have to scramble to find a celebrity to face Rollins. (TJRWrestling)

Britt Baker’s almost ten month reign as AEW Women’s Champion, has come to an end. This past Wednesday on Dynamite, Baker defended the AEW Women’s Championship against Thunder Rosa in a Steel Cage Match. After a brutal match that included thumb tacks, Rosa was able to get the win after hitting a Fire Thunder Driver. With the win, Rosa became the only women to ever hold both the NWA and AEW Women’s Championship. As for Baker, now that she is no longer champion she should have a lot more time to Netflix’s and Drill. (TJRWrestling)

I have no words to describe how I feel. The love, the energy, the results of yesterday’s match.
Im blessed and I’m thankful. I just know there is a lot of work to be done.
Gracias a mi gente por este momento tan especial. Your NEW @AEW women’s champion #ThunderRosapic.twitter.com/IyShnGphmp

2. Big E Breaks His Neck During Match on WWE Smackdown

Any long time reader knows that I usually try to keep this article light, and hopefully bring a few laughs to its reader. This week that task has been harder than usual with the loss of Scott Hall, along with what happened to Big E this past Friday on Smackdown. During Smackdown, Big E and his partner Kofi Kingston were wrestling Sheamus and Ridge Holland in a Tag Team Match. During the match, Holland hit Big E with a Belly to Belly Suplex unto the floor. Big E landed directly on his head and neck, causing him to need to be stretchered out of the arena. Later Big E revealed on Twitter that he had broken the C1 and C6 vertebrae in his neck, but likely will not need surgery. It is unknown how long this injury will keep Big E out of action, but he will almost certainly not be competing at WrestleMania 38. One positive thing that came from this horrible incident, was the outpouring of love and support from all around the wrestling world. Proving what everybody already knew, that Big E truly does rock. (TJRWrestling)

That concludes another edition of The Top Ten Wrestling Stories of the Week. Thank you for taking the time to read this each week. Although I often joke, I have recently started refereeing with NYCW and respect more than ever what wrestlers do every week. I wrote an article all about it all right here. If you like what I do, despite my jokes being almost as bad as Heaven running out of toothpicks, then follow me on Twitter @Fowlerwrestlin1.