It is with great sadness that we report that legendary two-time WWE Hall of Famer Scott Hall (aka Razor Ramon) has passed away. He was 63 years old.

It was reported by Wade Keller of PWTorch on Sunday that Hall was on life support at Wellstar Kennestone Hospital in Marietta, Ga. after suffering three heart attacks. Hall had hip replacement surgery last week, but sadly there was a blood clot issue.

Late on Sunday night, Hall’s best friend Kevin Nash posted this emotional message on Instagram noting Hall was on life support and the family was gathering together to say their goodbyes.

Very well said by Kevin in what is obviously a difficult time for him and anybody that was close to Scott.

On Monday night as WWE Raw came on the air, WWE confirmed that Hall had passed away.

WWE is saddened to learn that two-time WWE Hall of Famer Scott Hall has passed away.

Hall made a name for himself in pro wrestling in the late 1980s as part of the AWA. After some short stints in WCW and other places, his breakout came when he debuted in WWE as Razor Ramon in 1992. The character was based on Tony Montana from the movie Scarface. Hall had told the story that WWE Chairman Vince McMahon had never seen Scarface, but he was intrigued with how Hall portrayed the character and Razor Ramon was born. Razor oftentimes referred to himself as “The Bad Guy” because there was a scene in Scarface where Montana did that.

Razor Ramon was a guy with a slicked-back hairstyle, he had gold chains around his neck, a toothpick in his mouth (usually had one on his ear too) and the kind of cockiness that made you want to hate him. In the early going, the character was a heel and he got to challenge Bret Hart for the WWE Championship at Royal Rumble 1993. On May 17, 1993, Razor lost a match on Raw to an unknown rookie named the 1-2-3 Kidd that was one of the most memorable moments in Raw’s early years. It was nearly 30 years ago and it’s still memorable for anybody that saw it happen.

Razor had a very successful run in WWE as one of the greatest Intercontinental Champions of all time. Razor held the prestigious title four times. The most memorable match of his career came at WrestleMania 10 when he faced his good friend Shawn Michaels in the first-ever televised, live Ladder Match in WWE history. The first man to climb the ladder to retrieve both IC Titles (there was a storyline reason for two titles) would become the champion.

After an incredible match that went back and forth with many memorable moments, Razor emerged as the winner. The match is considered not just one of the best WrestleMania matches of all time, but one of the best matches in wrestling history. It put the ladder match on the map so to speak. If you’ve never seen the video below, you can see how much Shawn and Razor loved that match. I highly recommend it to anybody that hasn’t seen it.

The first Ladder Match between Razor and Michaels was so good that they did it again at SummerSlam 1995 where they had another amazing Ladder Match. There wasn’t even a storyline in place. It was just a case of WWE officials knowing they needed to put a great match on the show, so they called on Razor and Shawn to deliver again. This time Michaels won in a match that utilized two ladders instead of just one. As mentioned, Hall would use his Razor’s Edge finishing move to lead him to four IC Title reigns in his career.

Hall didn’t come a WWE World Champion even though he should be considered one of the best wrestlers to never reach that level. That doesn’t mean he failed to accomplish a lot. Along with Michaels, Diesel (Kevin Nash), Triple H and Sean “X-Pac” Waltman, he was part of a group known as The Kliq that was obsessed with pro wrestling because they loved it so much. In early 1996, Hall made the decision to leave WWE after getting a better contract offer from their competitors, World Championship Wrestling. Hall’s last night in WWE in 1996 would end with him joining Michaels, Diesel and Triple H (still using the blueblood Hunter Hearst Helmsley gimmick) in a group hug in the middle of the ring in Madison Square Garden. The “MSG Incident” led to heat against the WWE Champion Michaels and Triple H while Hall and Nash were gone from WWE, so there wasn’t that could be done to them.

Following his WWE departure, Hall became a huge presence in WCW when he made his return to the company live on WCW Monday Nitro on May 27, 1996.

Hall walked into the ring: “You people, you know who I am. But you don’t know why I’m here.” Hall ended it by saying: “You want a war? You’re going to get one.”

It was a few weeks after that when the former Diesel showed up in WCW using his real name Kevin Nash. Those two men threatened everybody in WCW. This would lead to Bash at the Beach in July 1996 when three WCW babyfaces Sting, Lex Luger & Randy Savage teamed up against Hall, Nash and a mystery partner. Late in the match, Hulk Hogan walked down to the ring and dropped a leg drop on Savage. Moments later, Hogan announced that together with Hall & Nash, they were going to be known as the New World Order.

The NWO went on to dominate for several years. After the initial run, the group gained more members and even split into two when they were the NWO Black & White and the NWO Wolfpac. Hall got to speak a lot while he was part of the group, oftentimes starting promos with a familiar phrase: “Hey yo.” After that, he would usually take a survey asking if fans were there to see WCW or the NWO with the NWO getting more cheers even though they were the bad guys.

Sadly, his problems with alcohol were starting to become a bigger problem in his life and it didn’t help that WCW made those problems public by having him carry around drinks on air or making jokes about it. Hall made sporadic appearances in WCW’s final years.

Even though the end of his WCW tenure there wasn’t great, Hall had a good run in WCW by capturing the United States and TV Titles as well as seven WCW Tag Team Title reigns (six with Nash). Just like in his WWE career, Hall didn’t capture the WCW World Title but there’s no denying that he was one of the biggest names in the company. 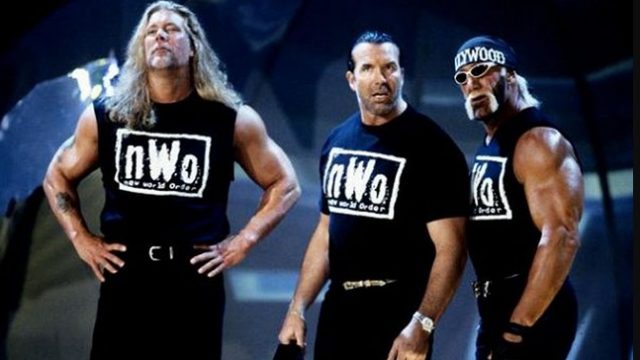 After WCW died in March 2001, Hall sat out the remainder of his contract until he returned to WWE in 2002 along with Hogan and Nash to form a WWE version of the New World Order. Hall lost to Steve Austin at WrestleMania 18. That run only lasted a few months due to Hall getting fired in May 2002 after the infamous “Plane Ride from Hell” when Hall was dealing with substance abuse issues.

Following his last run in WWE, he went on to work for TNA Wrestling and made appearances at indy shows. His health issues were bad at times due to his alcohol problems and then fellow wrestler Diamond Dallas Page helped him get better in 2013. Hall looked a lot better after that. A year after that, WWE came calling to put him in the Hall of Fame.

During his 2014 WWE Hall of Fame induction speech, Hall had a memorable line that will stay with wrestling fans forever: “Hard work pays off, dreams come true. Bad times don’t last, but bad guys do.”

It was a fitting line for him since he was known as “The Bad Guy” throughout his career and he went through a lot in his life due to alcoholism and other issues.

Scott is survived by his son Cody, who has been a pro wrestler himself, and daughter Cassidy. He was divorced twice.

On behalf of everybody associated with TJRWrestling, we send our condolences to his family, his friends, all the pro wrestlers that he made a big impression on, his fans all around the world and everybody else mourning this tremendous loss. 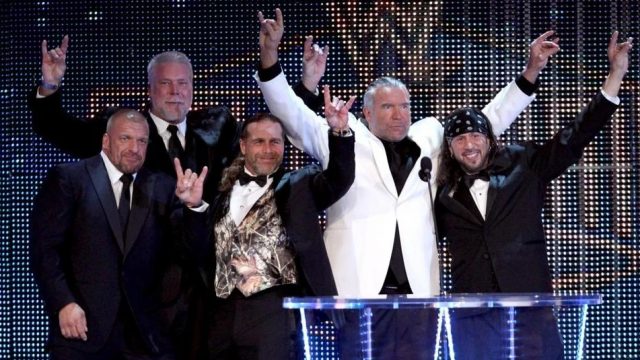 TJR Thoughts: I don’t often do this for news posts that I write anymore, but I felt compelled to this time. I always liked Scott/Razor and I feel lucky that we got to watch him entertain us for so many years.

The Razor Ramon character was such a cool guy at a time when wrestling had a lot of silly gimmicks in it. Razor stood out, so even though he was originally a heel, it was smart for WWE to turn him face because he was able to get a good response from the crowd. Those two ladder matches with Michaels will never get old with me. When he jumped to WCW in May 1996, I had no idea. The internet wrestling scene was a thing, but I didn’t check it regularly until a year later. I was stunned by it. The NWO forming at Bash at the Beach 1996 was a huge moment while the NWO is one of the most successful groups in wrestling history. Hall was a key part of it. It’s sad that Hall had alcohol problems throughout most of his life. He tried to get better numerous times. A lot of us knew about his alcoholism problem for decades and when we saw him get better thanks to DDP’s help, it was such an awesome thing to see. I saw Scott at signings after that. He was healthy, happy and laughing as usual. That’s what I’ll remember because he’s a guy with a big personality that was loved by so many people. On a personal note, I have said “hey yo” many times because of that man. I always thought it was a funny way to start a message. It makes me laugh. It always will.

Rest in peace, Scott Hall. Thank you for the memories. We love you and we will miss you.