Smackdown is going to be in the market for a new ring announcer. This week it was reported that WWE had released Smackdown ring announcer Greg Hamilton. Hamilton had been with the WWE for almost six years, and had been the ring announcer for Smackdown for several years. Rumors almost immediately began to circulate on why Hamilton was released, including that it was due to Hamilton threatening to have WWE lawyers sue rapper Westside Gunn for using his voice in a rap. Hamilton, for his part, has denied all of the rumors thus far, and stated that the release was mutual between all parties. We may never know what really happened unless of course it is covered in “Dark Side of the Ring” season 15 in 2031. (ITRWrestling)

The tournament to crown the inaugural AEW TBS Champion began this past Saturday on AEW: Dynamite. Twelve women were announced for the tournament, with Thunder Rosa, Jade Cargill, Nyla Rose and Kris Statlander all getting first-round byes. On Saturday, Ruby Soho defeated Penelope Ford and will move on to the quarterfinals to face Statlander. Also this past Wednesday on Dynamite, Hikaru Shida defeated Serena Deeb and will now go on to face Rose. The Bunny will face Red Velvet and Anna Jay will face Jamie Hayter in the other two first round matchups. It is not clear why the other 19 women wrestlers on the AEW roster were not included in the tournament. (TJRWrestling) 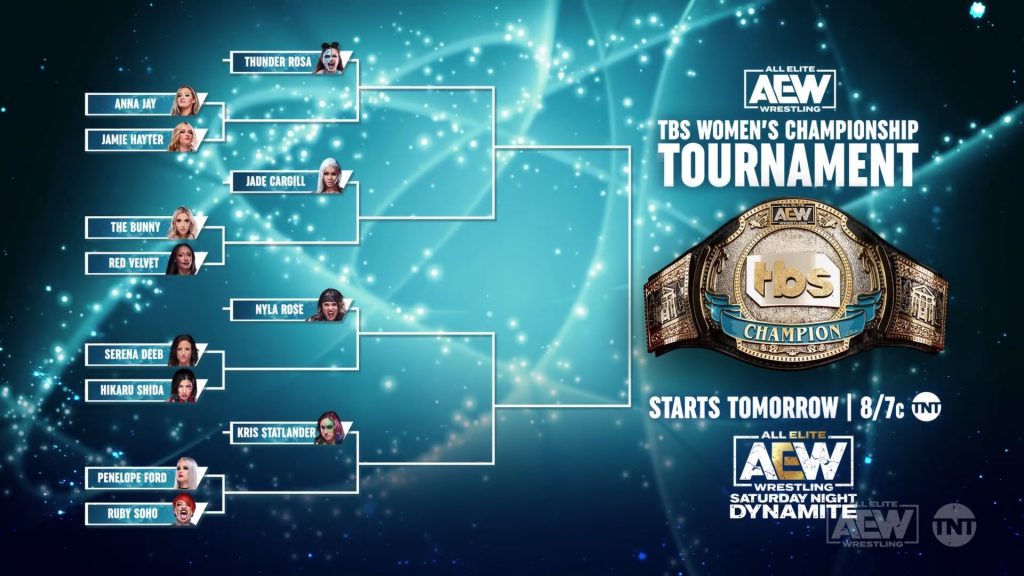 Impact Wrestling held its biggest event of the year Bound for Glory this past Saturday. Multiple titles changed hands including Trey Miguel defeating El Phantasmo for the X Division Championship. The IInspiration (formerly the IIconics) defeated Decay to become the inaugural Impact Knockouts Tag Team Champions. The legendary Mickie James once again became Impact Knockouts Champion by defeating Deonna Purrazzo. Finally, the Impact World Championship ended up changing hands twice with Josh Alexander first defeating Christian Cage for the title. Moose then however cashed in his Call Your Shot and defeated Alexander to leave with the title. Now I realize by including Impact Wrestling on the list this week, when I have ignored NJPW’s G1 Tournament over the past few weeks, may anger some hardcore wrestling fans. Therefore I would like those fans to know that I looked at the ratings and Impact won the coveted 18-49 Demo.

Roman Reigns will not have to worry about Brock Lesnar anytime soon. This past Friday’s Smackdown began with Universal Champion Roman Reigns along with Paul Heyman giving a promo. Roman’s promo was then interrupted by an angry Lesnar, who proceeded to not only attack Reigns, but a cameraman, referee, and WWE official as well. Lesnar’s actions caused WWE official Adam Pearce to then come to the ring and suspend Lesnar indefinitely. Pearce was then given two F5’s for his trouble by Lesnar. Lesnar will likely be off television for a while (the popular guess is January around Royal Rumble time), and will have to survive on just the $10 million he was paid for his last three appearances.

6. Seth Rollins Becomes Number One Contender for the WWE Championship

Seth Rollins first night back on the Raw roster was a successful one. This past Monday’s Raw featured a Fatal 4-Way Ladder Match to determine a new number one contender for the WWE World Championship. In the end, it was Rollins defeating Finn Balor, Kevin Owens and Rey Mysterio to win the match. It is unclear when Rollins will get his title match against Big E, as the next PPV is Survivor Series which usually features Raw champions vs. Smackdown champions. I for one cannot see WWE changing the Survivor Series format, because as we all know it is the only time all year that Raw and Smackdown superstars go head to head against each other. (TJRWrestling)

Imperium is once again the NXT Tag Team Champions. This past Tuesday at NXT: Halloween Havoc, Imperium challenged MSK for the NXT Tag Team Championships. In the end Imperium was able to defeat MSK to become two-time NXT Champions. Imperium will now have to try to defend their titles against such teams as the Grizzled Young Veterans, MSK, Legado Del Fantasma and the 20 new teams that NXT 2.0 will probably introduce this month.

Wrestling fans can start making plans for 2022 early this year. This week WWE released the entire 2022 PPV schedule. Included in the schedule were several huge stadium shows, including two nights of Wrestlemania at AT&T stadium in Dallas, Texas. Releasing the schedule so early is great news for fans around the world who are planning on trying to attend. Also, seven of the PPV’s (including night one of Wrestlemania) are on a Saturday, which is great news for old people like me who have to get up for work on Mondays. (TJRWrestling)

We’re taking it to a WHOLE ‘NOTHER LEVEL! ⭐️#WrestleMania will take place on Saturday, April 2 & Sunday, April 3 at @ATTStadium!

With both Becky Lynch and Charlotte Flair getting drafted to different brands as champions, something had to be done with the titles. WWE’s simple and quite frankly boring solution to just have Lynch and Flair exchange the Smackdown and Raw Women’s Championships did not go as planned, however. Smackdown ended this week with both Flair and Lynch in the ring with WWE official Sonya Deville. Flair and Lynch were then supposedly supposed to just trade their titles, but Flair ended up throwing her title on the ground instead. Lynch then threw her title at Flair, before Sasha Banks came down to challenge Flair for the Smackdown Women’s Championship. This exchange reportedly upset Lynch, who then confronted Flair backstage. Things proceeded to reportedly get heated between the two women, leading to Flair being escorted out of the building by security. Flair’s fiancé Andrade El Idolo tweeted out “F*ck WWE” after the incident. In related news, Tony Khan circled another picture in the WWE roster catalog for Christmas this year. (TJRWrestling)

Toxic Attraction dominated this past Tuesday at NXT: Halloween Havoc. First, Gigi Dolan and Jacy Jayne defeated Io Shirai and Zoey Stark and Indi Hartwell and Persia Pirotta in a “Scareway to Hell” Ladder Match to capture the NXT Women’s Tag Team Championships. Toxic Attraction wasn’t done however as Mandy Rose also challenged Raquel Gonzalez in a Trick or Street Fight for the NXT Women’s Championship. The finish of that match saw a masked woman attack Gonzalez with a shovel, allowing Rose to get the win. The masked woman then revealed herself to be Dakota Kai, as Rose celebrated her title win. Rose has been a part of WWE since finishing second on Tough Enough in 2015, but this is her first title win. John Canton considered giving Rose’s title win his first six-star rating, but ended up changing his mind at the last minute. (TJRWrestling)

Body of a champ😝 pic.twitter.com/dlK7HFAqjI

1. ROH Goes on Hiatus and Releases All Of Its Talent

Unfortunately, the top ten list will be ending on a sad note this week. Ring of Honor Wrestling announced that they will be going on a hiatus during the first part of 2022, and subsequently will not be renewing any of their talents contracts. ROH did promise to return in April, with a new fan-focused ROH. If you are not familiar with ROH, I promise you know of the talent they have helped develop. Bryan Danielson, CM Punk, Samoa Joe, Kevin Owens, Seth Rollins, Sami Zayn, Adam Cole and so many more all made a name for themselves at ROH. Personally, as a fan of ROH since its conception in 2002 (next year will be 20 years!), I hope that they can rebrand themselves and come back stronger than ever. As for all the talented wrestlers who have suddenly found themselves unemployed, I hope Tony Khan steals his father’s checkbook and hires them all. (TJRWrestling)

That will conclude another edition of The Top Ten Wrestling Stories of the Week. Thank you for taking the time to read this each week. Although I often joke, I have recently started working with NYCW and respect more than ever what wrestlers do every week. If you like what I do, despite my jokes being almost as bad as a bunch of wrestlers losing their jobs during the holidays, then feel free to listen to my brand new podcast The Smark and the Noob and follow me on Twitter @Fowlerwrestlin1 as well.