Their battles with one another were the most gruesome in wrestling history. From their battles in FMW and the King of the Deathmatch to their time in Extreme Championship Wrestling and later the WWE, Cactus Jack and Terry Funk brutalized one another. In rivalry steeped rich in respect, the two men would battle countless times, with each time seeming to raise the bar from their previous battles.

While both men have since retired (although with Terry, it’s always suspect if that’s true), their rivalry was so much so that they would make each other bleed and nearly blow the other up at any given moment. What made their feud so special was that at any time and at any point, they could come together and know that when they did face each other, two things were certain. Firstly, blood would be shed. The second would be that fans would be waiting with bated breath as to what these competitors will do next to themselves as much as each other. It was certain to be a time when chairs, branding irons, fire, and blood were all key elements of their feud. 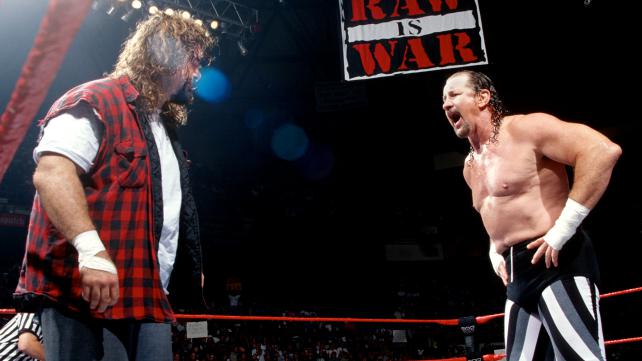 While many would essentially suggest that was a time and a place and offered a more technical aspect, it was more so that fans had long been familiar with both men as they had endeared themselves to the audience. However, their feud in the eyes of one of these two men is reminiscent of another rivalry that has taken place in wrestling today. Mick Foley would chronicle a feud that has had history and once again resurfaced in 2021.

When Jon Moxley and Nick Gage battled one another, it was a long time coming. Both men have battled one another during their time in Combat Zone Wrestling and once again were on a collision course to beat each other from one side of the ring to the other. When they battled years ago, the two men would carve one another up and hold little to no regard for the other man.

For Mick Foley, his time with Terry Funk was a special time and one that he can look fondly. However, as the torch for the bloodshed, he and Terry shared a new life throughout their time together. Nick Gage and Jon Moxley would battle for the Game Changer Wrestling World Championship. In doing so, it was a true reflection of how both men were held in high regard for that title and in deathmatch wrestling.

“Who am I to tell someone their style of wrestling is wrong? I had the type of stuff that I enjoyed watching. I can appreciate lucha [libre], for example, but it wasn’t what I wanted to do. I like the wild matches and these guys have taken that torch that Funk and I lit, and ran a couple of laps on their own with it.” – Mick Foley on the Nick Gage and Jon Moxley rivalry 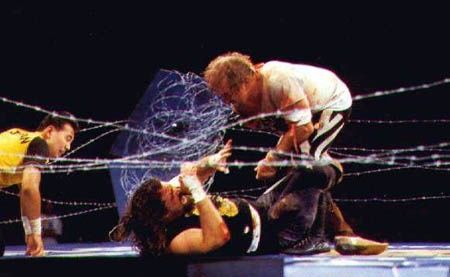 Even Foley is aware that the stakes now are higher than they ever were. While some may disagree with Foley, it is really difficult to when considering the matches he and Terry Funk competed in. Foley and Funk stepped into a ring together thirty times in one way, shape or form. From the no-ropes barbed wire tag team match in IWA Japan against Funk to the Scramble Bunkhouse Death Match on New Year’s Day in 1995, Cactus Jack and Terry Funk absolutely brutalized each other as much as they did themselves.

“Terry Funk is the greatest wrestler I have ever seen. No one made it easier to believe than The Funker.” – Mick Foley

Although most of their barbed wire featured deathmatches in Japan, Funk, and Jack, they weren’t removed from still competing in street fights and no holds barred matches in North America. Their matches against one another in ECW and later the WWE were prime examples of this taking place.

In comparison, Nick Gage and Jon Moxley’s history with one another goes back over a decade. Their earliest battles with one another, as mentioned earlier, were as part of CZW. From the rather unique fans bring the weapons match to no ropes barbed wire matches and falls count anywhere, Jon Moxley and Nick Gage would tear one another apart all over the place.

When the two men faced one another in October 2021, it had been a decade since they faced one another. However, when Moxley confronted Gage at the end of GCW’s Tournament of Death, the seeds were planted for the two, having rekindled a feud that was long remembered in the lore of deathmatch wrestling a decade earlier. But leading into their match with one another this past October, Moxley was sure to share how much it meant to step back into the ring with Nick Gage.

“Madison Square Garden, Grand Slam Champion, all those f****** toys and posters, they don’t mean s***. Getting mugged by fans in airports and hotels and arenas, don’t mean s***, I don’t like people anyway. It’s not the drug that I love, the drug I’ve been addicted to you for over a decade. Nicky, when you were in jail right, pacing and pacing around in a jail cell, I was pacing around in hotel rooms. I wanted that drug.”

“We have unfinished business, we have a score to settle that is ten years old and I paced those hotel rooms and I prayed to God that you would get out one day so that we could settle that score. I tried to let it go, Spring Break I really tried to let it go. I tried to let you have your moment, but I just can’t let it go. I want that drug, Nicky, the drug that only comes when me and you lock horns in the centre of the ring and there’s no other ring it can take place in but GCW. The place where I am the king now. Do you think [the championship] really means anything to me? I’m going to make it mean something. If I want to go and become the greatest GCW World Champion of all time, I can do that because I’m just that good. I can make it look that easy.”

“Do you know what this is to me, Nicky? This is bait. This is blood in the water and I wanted you to come hunting for me, sniff me out. You sniffed me out and you know exactly where I’ll be in Atlantic City on October 9.” – Jon Moxley on facing Nick Gage

It’s clear that the excitement that Moxley felt in facing Gage wasn’t unlike that same scathing passion that Foley felt when he stepped into the ring with Terry Funk. Moxley knew the value of the GCW championship but also knew what it meant to once again come face to face with Gage. While Funk and Foley were ‘hardcore legends and icons,’ it is Gage who is unmistakenly the cornerstone of ultraviolence in wrestling today. Funk was as much a mentor to Foley as he was an adversary, rival, and tag team partner. It is likely that same respect and admiration that Foley has for Terry Funk that Jon Moxley and Nick Gage share for one another. Their histories with one another will be forever intertwined, and one’s that should be remembered once their careers have come to an end.

On a final note, Mick Foley posted a photo with Terry Funk today. We want to wish those two Hardcore Legends good health and thank them for the incredible memories. Two absolute wrestling legends that we were lucky to watch perform for us.

LOOK WHO I RAN INTO!

I made a little side trip to Amarillo to take the legendary Terry Funk to lunch.

Still my mentor, still my idol after all these years.
⁦@TheDirtyFunker⁩ pic.twitter.com/Gp1Plobtfo