It has been ten days since “The American Nightmare” Cody Rhodes returned to WWE on Night One of WrestleMania 38. It is a moment that many will be talking about for years to come.

It’s the first big departure from AEW to WWE and you can argue that there really isn’t anybody bigger. Cody Rhodes was an Executive Vice President of AEW. He is arguably the reason AEW is a thing in the first place. It was Cody who came up with the idea of running an independent show after Dave Meltzer questioned whether WWE would have another serious competitor that could sell 10,000+ tickets. That independent show turned out to be All In (on September 1, 2018), which is where Tonty Khan first realized that running a second big-time wrestling promotion was a viable possibility.

Much of AEW’s early success can be attributed to Cody. He helped AEW through the pandemic era by introducing the TNT Championship. The open challenges were a highlight every week on Dynamite. Those challenges led to the signing of AEW mainstays like Eddie Kingston and Ricky Starks. However, one of the things that handicapped Cody’s booking was the fact that he couldn’t compete for the AEW World Title. That was a storyline result of his loss to Chris Jericho at the first-ever Full Gear event and a storyline he and Tony agreed to adhere to. That meant there weren’t a lot of title opportunities for one of the biggest stars in your company. Ultimately, seeing Cody go for the TNT Title became stale and repetitive.

The Crowds Turned on Him 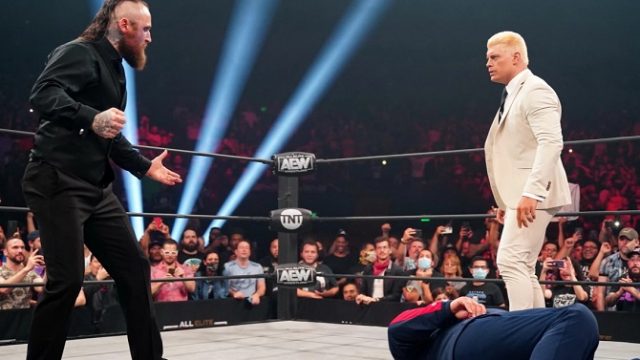 Cody Rhodes slowly began to receive backlash for his booking in AEW. Much like his father, Cody received criticism for some of his perceived booking decisions. Tony eventually took control of the booking, but that didn’t stop the critics. Cody’s promo on Anthony Ogogo on Dynamite in early 2021 served as a rallying point for fans against the character.

Cody would go on to put over guys like Darby Allin, Malakai Black and Sammy Guevara, but he knew that a change of scenery would be best for all involved. He couldn’t compete for the World Title, the crowd had completely turned on him (as well as his wife Brandi), and his booking for the better part of several months, had run cold. Cody had some unfinished business.

Cody Rhodes left AEW in the middle of February and speculation immediately began that he was WWE bound. Nobody from the Cody camp made any official comment nor did WWE. Seth “Freakin” Rollins was in the middle of an angle trying to get on the Wrestlemania 38 card. Rollins lost at Elimination Chamber, ensuring that he would not be going into Wrestlemania as WWE Champion. Rollins and Kevin Owens then lost a Raw Tag Title match which guaranteed Seth Rollins would not go into Wrestlemania as a Raw Tag Champion. Rollins challenged Owens for the right to interview “Stone Cold” Steve Austin, which he lost. Then, Rollins lost to AJ Styles which meant he could not face Edge at the Show of Shows. By this point, everybody had already expected Cody to be the opponent of Seth Rollins. The commentary had dropped teases such as “undeniable” and “nightmare” as well as several “smoke and mirrors” comments in promos. It was March 18 when PWInsider reported that Cody had signed, which we reported on here. On the last Raw before WrestleMania, Seth Rollins was told to show up at Wrestlemania 38 to face a handpicked opponent of Vince McMahon.

The pop Cody got at WrestleMania 38 was huge. Hearing “Wrestling has more than one royal family” on a WWE-produced show was surreal. Cody returned home to face Seth Rollins in what was arguably the best match on either night of Wrestlemania. Cody looked like he hadn’t missed a beat, even hitting a top rope Cody Cutter on Seth Rollins. The crowd loved every minute of it as Cody won his WWE return match in front of 70,000+ people. Cody has appeared on Wrestlemania and two episodes of Raw since his return. I’m just going to say it. I may get heat for it, but the facts are facts. Cody, from a strictly booking perspective, has been portrayed as a bigger deal in just the last ten days in WWE than he had his entire previous run with WWE as well as his entire three-year run with AEW. He feels like the guy who could beat Roman Reigns and that is in large part to the work Cody has put into establishing this character over the last six years.

A big part of the reason this character is working is because of the presentation. Often times when an outside talent comes into WWE from another company, they try to change their presentation. They alter what got them over in the first place. Diamond Dallas Page is a prime example of someone who was super over in WCW and came to WWE (WWF at the time) and had his whole character changed. It is something he never recovered from. Cody did not have that issue. He returned to WWE with the same music, same gear, same look, pyro, song, everything that made him special over the last six years. He kept it all. It is really unprecedented as Booker T and Goldberg are the biggest names I can remember that came to another company and they didn’t change anything about them.

Cody knew that if he returned to WWE, the only way it would work would be if he retained his character. He was right as the reactions have been impressive since he came back. The crowd that were booing him six months ago are no longer there. He was the hero he always wanted to be. Cody has always wanted to be like his father, Dusty. He wanted to be The American Dream no matter how much he tried to ignore it. Now that he is back, he has a real chance to finish what he started and finish what he always wanted. Cody returned as The American Nightmare. It’s now up to WWE to not screw that up.

Cody Rhodes is Shaking Up The Terminology

One of the hot topics over the last eight days is exactly how much of what Cody is saying on television is scripted. Well, the answer is all of it. It’s just not how most of you probably would guess.

Cody has leaned heavily into the use of words like “belt” and “wrestling”, words that have been on WWE’s banned list for years now. Even on Raw last night, The Miz corrected him by saying superstar and title because a belt is what “holds up your pants.” Scripted does not automatically mean a writer writes a promo and the superstar performs it. It could also mean the talent writes down what they want to say and they meet with the writer or Vince himself and they go over what works and what doesn’t and a version of what the talent wanted to say eventually makes its way on to television.

The Miz was the perfect foil for Cody’s first match on Raw as well as the promo that started Raw. He’s the epitome of a WWE Superstar. Perfect for public relations, he gets all the buzzwords in, and rarely ever says anything he is not supposed to. Cody represents the outsider. Cody is “The Wrestler” who uses terms that most wrestlers outside of WWE use on a daily basis. I applaud WWE for leaning into that and not forcing Cody into a box. Cody can only work in WWE if he is allowed to be himself. As soon as the fans even get a whiff that Cody is being watered down, they’ll turn on him just like the AEW crowd did.

What’s Next For The American Nightmare? 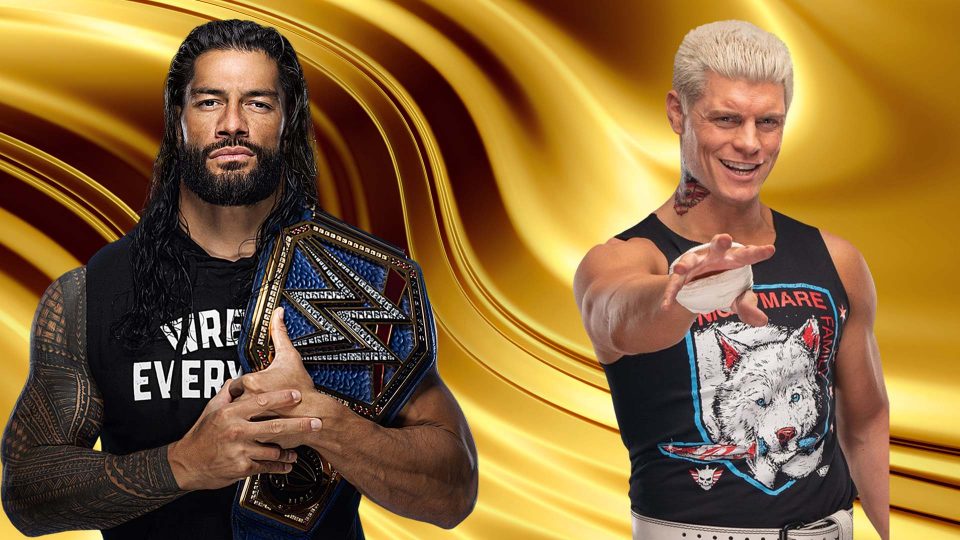 That seems to be the burning question. His immediate future includes a rematch with Seth “Freakin” Rollins at Wrestlemania Backlash. I expect a win for Cody there. You can’t use 50/50 booking this early. I don’t have a problem with him losing a match. Just not this way. He beat Seth once. Having him lose at Wrestlemania Backlash is telling everybody that Cody got lucky because Seth wasn’t prepared. After that, there’s only one goal left.

Cody has mentioned it several times over the last ten days. The WWE Undisputed Universal Championship or whatever they’re calling it. Roman Reigns has not been pinned or submitted since December of 2019. He defeated Brock Lesnar to unify the WWE and Universal Titles. How long that remains the case is anyone’s guess. In my opinion, there are only two choices to defeat Roman Reigns. Drew McIntyre, who has been built back up since arriving on Smackdown last fall, and Cody Rhodes.

I know there is a UK premium live event coming in September on Labor Day weekend and the temptation is to put the belt on Drew there. That’s a solid decision. IF that decision is made, I would hold off on putting the title on Cody Rhodes until Wrestlemania 39 if The Rock isn’t available. If the plan isn’t for Drew vs. Roman, I would put the title on Cody at Summerslam. Summerslam hasn’t had many big moments in recent years. Having Cody fulfill his destiny there would be perfect. Giving him the Money in the Bank briefcase is also an option, but I wouldn’t do that. Cody doesn’t need it and I wouldn’t have his big moment defeating Roman Reigns be cheapened by a Cash-In attempt. I guess only time will tell but for my money, Cody Rhodes will be WWE Champion by this time next year.

There you have it. Cody Rhodes has returned home to WWE. Will he be the last star from AEW to cross over? Unlikely. How WWE treats him over the next year could prove beneficial when it is time to negotiate with some impending AEW free agents such as Wardlow, MJF, etc. The ball is in your court, WWE. This is your chance to reverse the momentum. Don’t screw it up.