This is the match that started it all. This was the first match in a feud that has, as of April 2021, spanned seven years and thirteen singles matches. Many of those matches are considered as some of the greatest pro wrestling matches of all time. And the feud between them was, and still is, considered the best in-ring rivalry of the entire 2010s decade.

And today we look back at the historic first match that sent shockwaves throughout New Japan, and indeed, the wrestling fandom. Today we revisit the first-ever singles match between Hiroshi Tanahashi and ‘Rainmaker’ Kazuchika Okada from The New Beginning 2012 (boy, there couldn’t possibly be a more appropriate PPV name than that).

Going into this match, Tanahashi was the unquestioned ace of New Japan. He was to New Japan what John Cena was to WWE. Tanahashi carried his company on his shoulders during a dark period and wrestled at such an elite level that he became the ace of the company. People rallied behind him like few people before him. Even though his wrestling style was very much unlike the traditional NJPW Strong Style, people loved him.

At the time of this match, Tanahashi was in his fifth reign as IWGP Heavyweight Championship. Statistics matter much more in NJPW, which is why Tanahashi was seen as such an elite-level wrestler. Going into this match, Tanahashi had held the title for 404 days, the longest reign since NJPW’s peak in 1996. He had also managed a record eleven successful title defenses in a single reign, more than anyone else in history. It seemed like no one would be able to stop Tanahashi from breaking every record in NJPW history.

Kazuchika Okada announced his intention to challenge for the title, which was seen as a major sacrilege in New Japan. With few exceptions, the champion announces their challenger, not vice-versa. But Tanahashi’s response to this challenge was to accept on the spot. And Tanahashi had a good reason to be so overconfident: NOBODY bought Okada as a credible challenger.

You see, Okada had returned to New Japan only a month prior and defeated fellow wrestler-on-foreign-excursion-returning-to-the-company YOSHI-HASHI at Wrestle Kingdom VI in a squash match. And from his return on that date to this match, Okada was soundly rejected by the New Japan fans. To them, putting a fresh coat of paint on a jalopy does not make it a Ferrari. People saw Okada acting as this ‘Rainmaker’ and thought of it as nothing more than a cheap gimmick filled with unnecessary theatrics. In New Japan, in-ring talent was and is far more important than theatrics. And Okada’s in-ring talents were considered far beneath anyone worthy of challenging for the world title. It also hadn’t helped that during NJPW’s partnership with TNA, Okada was stuck with a terrible ‘sidekick’ gimmick for Samoa Joe that saw him either jobbing or not getting any chances to learn or showcase his true capabilities. Okada’s treatment by TNA got back to NJPW, and they were so angry that they severed all ties with TNA, ending a relationship that has lasted several years.

So for Okada, this match was the biggest of his career. He claimed to have become a new man and a better wrestler than anyone in NJPW, including Tanahashi. That was a bold statement to make, especially considering how gifted Tanahashi was and still is as a wrestler. Okada remained confident, even as many NJPW fans straight up laughed at the absurdity of his claims. They were convinced that Okada would be nothing more than a stepping stone for Tanahashi, and that Tanahashi would make easy work of him and move on to challenge someone far more believable. 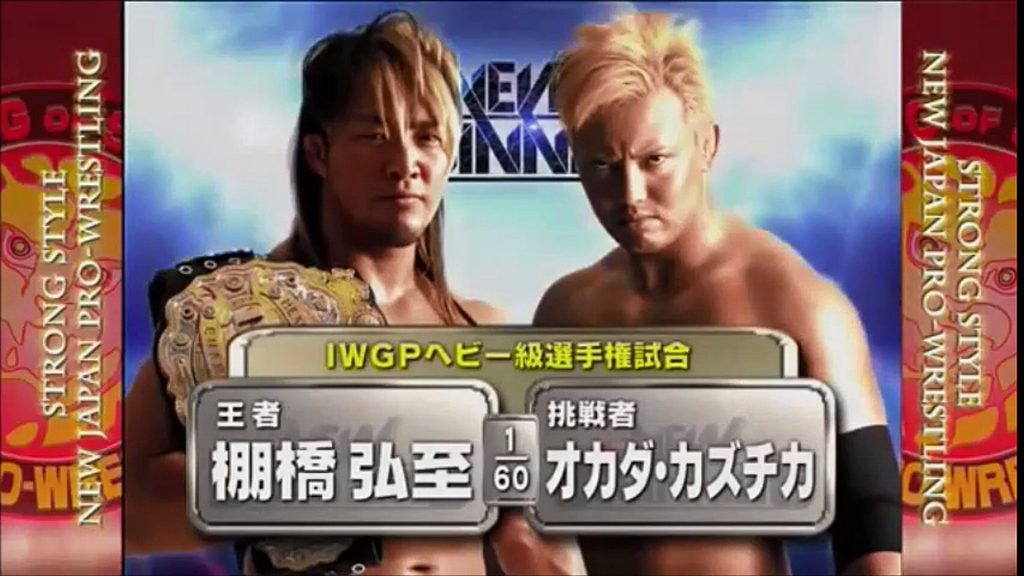 This match originally took place on February 12th, 2012 at New Japan’s The New Beginning event. It was originally rated ****1/4 stars by the Wrestling Observer’s Dave Meltzer. Looking back now, let’s see how well this match holds up.

They do ring announcements and the crowd actually boos Okada. That wouldn’t be a big deal in North America but it is in Japan. It’s rare for a Japanese wrestler to get booed right out of the gate, but clearly, this audience does not like Okada whatsoever. They see him as too Americanized, so they let him know how they feel.

Tanahashi gets in Okada’s face as the bell rings. Okada tries to cheapshot Tanahashi in the corner after a clean break but Tanahashi has him scouted and lands some forearms. Tanahashi goes for the arm but Okada knocks him away with a huge forearm shot. He applies a headlock then knocks Tanahashi down and poses, which gets a spattering of boos. But Tanahashi quickly regains control with some superior grappling and applies a deep grounded headlock.

Okada whips Tanahashi face-first into the steel ringpost, then applies a chinlock on him using the steel barricade for extra pressure. Back in the ring, Okada lands some elbows to the head and applies a chinlock, followed by a swinging neckbreaker for a two-count. He lands a Muta-style rib breaker and goes for a senton but Tanahashi rolls out of the way. Tanahashi counters an irish whip and goes for a dropkick but Okada holds onto the ropes, then lands his own dropkick on Tanahashi for another two-count. Okada lands some forearms and a flapjack, followed by the Deep In Debt chinlock submission hold.

Tanahashi reaches the ropes with his foot but Okada takes his time letting go, which gets boos from the crowd. Okada lands more stiff shots but Tanahashi starts firing up. Tanahashi dodges a corner charge and ducks more strikes while landing stiff slaps to Okada’s chest. Tanahashi maintains control with a Shawn Michaels-style flying forearm, but Okada fights back. They trade brutal strikes and Okada dodges a charge that sends Tanahashi over the rope. But Tanahashi skins the cat and catches Okada’s leg. Dragon screw leg whip. Okada escapes from the ring. High Fly Flow from the top rope to the floor.

Okada gets to the ring after Tanahashi and fights him from the apron. But Tanahashi maintains control with a second dragon screw, twisting Okada’s leg through the ropes. That’s followed by a third one in the ring. and then another, fourth, inverted one. Tanahashi applies the Texas Cloverleaf. Okada reaches for the ropes. Tanahashi sits backwards. Okada still reaches the ropes, but it takes a lot out of him. Tanahashi charges for a slingblade but Okada catches him and drops him head-first with a Tombstone. Okada gets critical time to recover as Tanahashi’s now in serious trouble.

Okada continues with the pressure on Tanahashi’s neck by applying the Deep In Debt submission hold a second time. Tanahashi gets his foot on the ropes, but Okada responds by cranking the hold even harder. He takes as much time as he can in letting go, and once again the crowd tells him how much they hate him. Okada charges but Tanahashi dropkicks his knee. Then he dropkicks Okada out of the ring. Tanahashi goes to the apron for a dive, but Okada dodges and Tanahashi eats canvas. Okada boots Tanahashi over the barricade. But he’s not done. Tombstone on the concrete floor! The ref checks on Tanahashi to make sure he can continue and starts the ring count.

Okada drags Tanahashi’s nearly-lifeless body into the ring and lands a diving elbow. He doesn’t capitalize right away because his knee’s still giving him problems. He goes for the Rainmaker, Tanahashi counters into a running slingblade for two. The crowd erupts in Tanahashi chants. Arm-trap bridging German suplex. Okada kicks out. Falcon arrow slam. High Fly Flow to Okada’s back. Tanahashi goes up again. High Fly—no, Okada gets his knees up. He hurts Tanahashi, true, but also further damages his own knee in the process. That’s how badly he wants to win.

Post-match, Okada’s title celebration is interrupted by Tetsuya Naito, who announced himself as Okada’s first challenger.

That was an excellent match that I think was a lot better than I thought it would be. Looking back now, most people wouldn’t give it much praise because it’s so far beneath the many epics they’ve had since then. But I think this match had a lot going for it that really makes it a tremendous contest on its own.

This was a foreign concept to most New Japan viewers as Okada was clearly a more Americanized wrestling ‘character’ than anyone else on their roster. And by representing that Americanized style, Okada found himself in enemy territory. These fans didn’t care about Okada at all and outright booed him whenever he was on offense. Okada must’ve known this as well, because he wrestled in a way that made the most out of that negativity. He fought dirty with things like hair-pulls, cheap-shots, open mockery, and most important, ignoring rope breaks. But that last point wasn’t just to raise the ire of the fans; it was all part of Okada’s master plan to weaken Tanahashi’s neck enough so that his trademark Rainmaker lariat would guarantee him victory. It was simple psychology, but Okada followed through with it from bell to bell.

As for Tanahashi, he was his usual self as he applied a tried-and-tested formula to try and win the match. He out-grappled Okada in the early portions and then attacked Okada’s legs as much as he could. That worked for him to some degree, but it failed him in the end because, a) Okada’s selling was a bit inconsistent, which has become a bit of a regular pattern with him; and b) Tanahashi neglected to attack Okada’s main weapon, his lariat arm. Tanahashi was so caught up in trying to slow Okada down and make it hard for him to keep up with him that when Okada landed his Rainmaker, it was more or less at full power. That full-powered Rainmaker, coupled with all the damage Okada did to Tanahashi’s neck throughout the match, made Okada’s win shocking while also being completely logical and justified.

While this is without a doubt the weakest Tanahashi-Okada match, it’s still a fantastic contest that holds up well over nine years later. Even without the roaring crowd or the extremely deep story or psychology, this match was awesome on its own right. Both wrestlers had surprisingly great chemistry for a duo that had hadn’t faced off before on a major level. They told an entertaining story that saw Tanahashi the unquestioned ace be beaten in a stunning upset by the evil outsider that represented everything the ace fought against.

This match has some charms that you’re not likely to find in other Tanahashi-Okada epics. It was much shorter, which made for easier viewing. Okada was more deliberate in his heelish tendencies, which makes it easier for the viewer to get behind either him or Tanahashi. And the psychology was on point, especially from Okada. Although Tanahashi was by far the better conditioned and more popular wrestler here, Okada showed more focus and went to greater lengths to win. And by doing so, he shook Tanahashi to his core and set in motion quite possibly the greatest in-ring rivalry of the decade.

It’s definitely a must-watch match for any wrestling fan out there, especially considering how often the names ‘Tanahashi’ and ‘Okada’ are thrown around in conversations about GOAT matches these days.