When wrestling fans hear the name ‘Ricochet’, many different words come to mind: ‘daredevil’, ‘Superhero’, ‘gravity-defying’, and so on. But since he has been in WWE, another word has been used to describe him more than any other: ‘underutilized’.

When he was first signed, many people hoped he’d become a huge star due to his abilities and experience. Sadly, he has since floundered and done precious little over the course of the past three years. And one of the main reasons he’s so underutilized is because of his body of work before signing with WWE.

Although WWE allowed him to keep his wrestling name, they didn’t allow Ricochet to wrestle how he did beforehand. His style in WWE is insanely toned down and he isn’t given the freedom to do what he does best. And what does he do best? The stuff found in this match.

Today we’re looking back at one of Ricochet’s best matches: his singles match against Kota Ibushi from NJPW Dominion 6.21 in 2014.

Ricochet won the 2014 Best of the Super Juniors tournament, which earned him a shot at champion Ibushi. Simple but relatable storytelling. 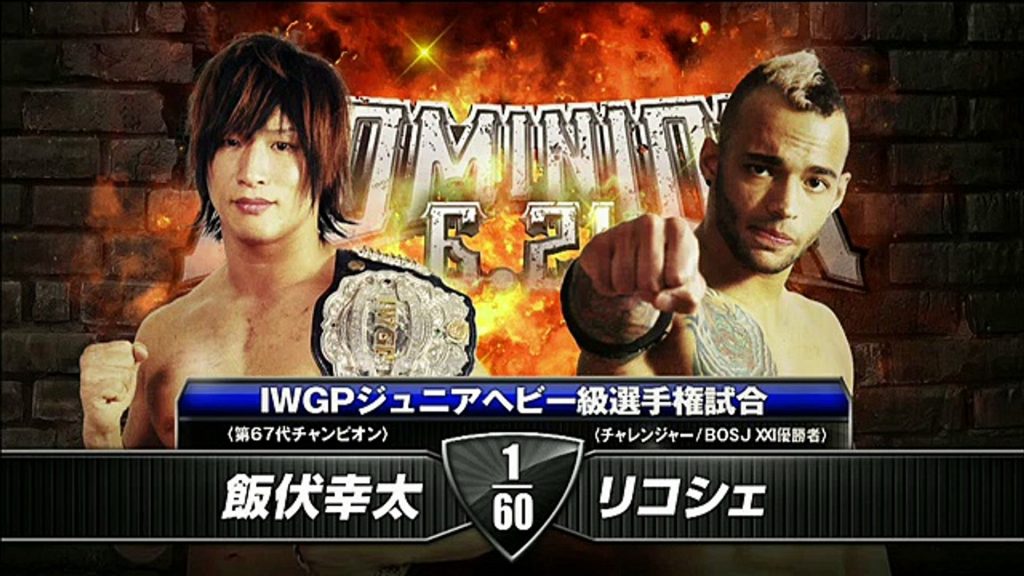 This is for Ibushi’s IWGP Junior Heavyweight Championship. They shake hands and Ricochet scores the first kick. Ibushi hits one in return and then stays put off a shoulder tackle spot. Ibushi charges and tackles Ricochet to the mat. Ricochet pulls an Ibushi and kips up instantly. LOTS of crazy flips ensue. Ibushi misses a moonsault splash and rolls to ringside to avoid a splash and a kick. The crowd chants loudly for Ricochet as he rushes Ibushi at the ropes. Ricochet ducks a clothesline and lands a Dolph Ziggler-style Zigzag and a shooting star splash for a two-count. He lands a corner uppercut, snapmares Ibushi, and punts his spine Kawada-style for another two-count. Ricochet follows with an arm-trap Texas Cloverleaf hold but Ibushi reaches the ropes quickly so Ricochet kicks and chops him into a corner. He follows with a big uppercut to Ibushi’s spine for another two-count and lands another flurry of strikes. He tries to whip Ibushi into the opposite corner but Ibushi holds on and then counters the corner whip. Ibushi runs into a boot but then manages to duck a discus clothesline, jump onto the top rope, and land a big diving dropkick. Ricochet falls to the floor. Ibushi’s triangle moonsault to the floor connects.

Back in the ring, both wrestlers briefly trade strikes until Ibushi lands a KENTA rush, followed by a wind-up kick and a standing corkscrew moonsault for a two-count. Ibushi charges for a lariat. Ricochet kicks his hand, reverses another and lands a springboard dropkick. This time it’s Ibushi who falls to the floor. Ricochet charges and flies over the ring ropes, the turnbuckle, and the ringpost, and hits Ibushi on the floor. Awesome dive.

Ricochet tosses Ibushi into the ring and lands a springboard crossbody for two. He follows with a GTS-type move to the gut for another two-count and then goes to the top rope. Ibushi cuts him off and teases a superplex. Ricochet punches him off and he lands on the apron. Some fighting ensues. Ibushi gains the upper hand with Ricochet perched on the top rope. Springboard hurricanrana by Ibushi. Absolutely crazy mo – wait, no, Ricochet lands on his feet. He ducks a lariat and lands an enzuigiri. Northern lights suplex into a Brainbuster. One, two, no, very close near-fall. Ricochet signals the end and lifts Ibushi onto his shoulders. Ibushi escapes and both guys roundhouse kick each other. Ricochet gains the advantage with a flurry of kicks and lifts Ibushi up again. Ibushi blocks a high kick and lariats Ricochet into next week. Last Ride Powerbomb. Ibushi kicks out. Phoenix Splash…misses. Ricochet lands a springboard shooting star press. One, two, no, Ibushi survives.

Ricochet lifts Ibushi up for his finisher again but Ibushi blocks one kick. But he can’t block another and eats a high kick to the side of the head. Ricochet lifts him up onto his shoulders again. Ibushi counters into a Frankensteiner pin. One, two, Ricochet kicks out. Ibushi lands a high kick of his own and signals the end. He lifts Ricochet up into the powerbomb position, bends him even further by trapping his head…and drills him with the bridging Phoenix-Plex. One, two, and three. Ibushi retains his title!

If you like mind-blowing athleticism and daredevil craziness, this match will make your week. It was terrific for an under-15-minute match thanks to the sheer explosiveness and blistering pace from both wrestlers. Granted, it was nowhere near the same level of quality as Eddy/Rey from Halloween Havoc ’97, but it’s still pretty good, all things considered.

Ricochet controlled the first half of the match with stiff kicks until Ibushi got a quick counter and started flying all over the place. And Ricochet, not wanting to be one-upped, out-dove Ibushi with his own crazy dives. Ibushi thought his triangle moonsault to the floor was impressive. Well, Ricochet proved he was way more agile by diving over the turnbuckle, over the ringpost, and onto Ibushi on the floor. Seriously, Ricochet must’ve flown a good 12-15 feet before landing and made it look like a cakewalk. Not only that, but Ricochet was one of the first wrestlers if not the first to take a diving hurricanrana, flip over, and land on his feet. It was one of those ‘daredevil superhero’ moments that really made these guys look like they took the term ‘theory of gravity’ literally, and it was tremendously fun.

Both Ibushi and Ricochet showcased what they can do and gave the fans a nice little exhibition title match. It wasn’t particularly deep; it didn’t need to be. It was just high-flying fun for less than fifteen minutes. If that was all the time they were given, then they did a great job working within those parameters. I think the match would’ve been better if it went a bit longer and had a bit more tension. As fun as it was, I think the match lacked heat and genuine tension. It was more about showcasing athleticism and ‘OMG look at that’ action instead of giving the fans anything to sink their teeth into. It would’ve been more exciting if Ibushi actually slowed down and tried to fight through the pain caused by Ricochet’s earlier attacks instead of going straight to the finishing sprint.

At the same time, that finishing stretch was awesome, especially with Ibushi’s last-second counters. He and Ricochet had great chemistry together and built up a great finish that left fans wanting more. it’s too bad that Ricochet never got another match with Ibushi. A rematch between the two of them would’ve definitely been as good as this match, if not greater. 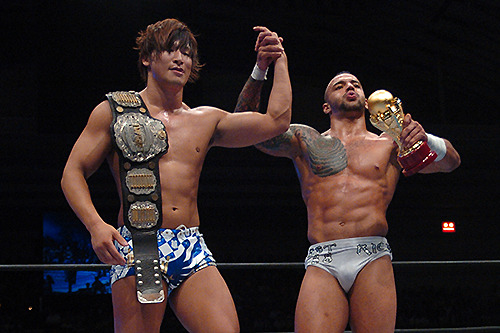 For a short, non-descript title match without much of a story, this was great. Ibushi and Ricochet wrestled together for the first time and gave the impression that they had fought many times before. This was one of those throwaway matches that was way better than it had any right to be and holds up pretty well. It’s nothing truly out of this world, especially considering both men would go on to have significantly better matches down the line.

Still, if you have fifteen minutes to spare and have a subscription to New Japan World, this is a match worth watching. It’s harmless fun, and makes for a nice lighthearted break in the otherwise serious world of Japanese pro-wrestling.