The debate raged on for months and it even reached the point that Big Van Vader (RIP), a respected wrestling legend, weighed in on it and challenged Ospreay to a match. You can guess how he felt about this contest.

Now, with the benefit of time, we can look back at this match to see how well it has aged and to see if all the arguing was worth it.

To that end, let’s look back at the match between Ricochet and Will Ospreay from NJPW’s 2016 Best of super Juniors Tournament.

In 2016, Ospreay joined New Japan for the first time and was announced as a participant in that year’s Best of Super Juniors (BOSJ) tournament. He had spent years on the British and American independent scenes cultivating a reputation for himself as a special kind of wrestler. And by ‘special’ I mean that he was seen as this generation’s version of Rey Mysterio: a young prodigy with this incredible ability to defy gravity and perform daredevil moves like no one else. Of course, pressure was on for him here because he was signed after receiving recommendations from AJ Styles, Hiroshi Tanahashi, and Kazuchika Okada.

But his opponent in this match was as big a challenge as any. Whereas Ospreay was still seen as ‘the new kid on the block’, Ricochet was the established name. He already possessed the reputation that Ospreay wanted. Ricochet was an incredible athlete with his unbelievable sense of timing and precision. He had blistering speed and seemed to have absolutely no fear. Because of those traits, Ricochet bounced around like a pinball inside, outside, and above the ring.

With these two similar wrestlers clashing, expectations were high for their match. But which one of them would win? The veteran with years of experience in New Japan’s intense junior heavyweight division, or the new kid that got signed because three of the company’s biggest stars saw something special in him and he hoped to prove them right? There was only one way to find out.

This match originally took place on May 27th, 2016. It was originally rated ****3/4 out of five by the Wrestling Observer’s Dave Meltzer. Let’s see how well it holds up now.

The crowd is split between both wrestlers as the match begins. They lock up and Ospreay does some Dynamite Kid-inspired flipping to escape an armlock and transition into a heel hold. Ricochet escapes so Ospreay tries for a bow-and-arrow hold but Ricochet escapes that too. Ospreay lands a shoulder tackle but Ricochet kips up instantly. Ospreay ducks down and Ricochet somersaults over him. That’s followed by multiple dodges, dips, flips and rolls. Ospreay escapes a headscissor with a handspring and goes for his own headscissor. But Ricochet does the same thing. Both men fly into the ropes and flip into the middle of the ring, copying each other move-for-move. The crowd applauds loudly as the two men go nose-to-nose.

Ricochet lands a big punch and some corner forearms and chops. Ospreay counters an Irish whip and charges into a corner but Ricochet dodges and lands a 619. Ricochet springboards for a splash…but Ospreay kicks his gut in midair. Ospreay pins but Ricochet kicks out before one, so Ospreay punts his back. He applies an abdominal stretch but Ricochet reaches the ropes while carrying Ospreay on his back. Ospreay lands a corner forearm and charges for another but Ricochet blocks and does a forward roll into a DDT. Ospreay escapes to ringside and staggers ‘into position for the next spot’. Ricochet charges and jumps. He does a corkscrew dive to the floor…and misses Ospreay completely. But the fans in the arena chant his name anyway.

In the ring, Ricochet jumps onto the top rope, balances himself using his shins, and lands a rolling senton onto Ospreay. Ospreay cusses loudly as Ospreay Kawada kicks his chest in and applies an Atlantida modified torture rack and then switches into some kind of twisted Stretch Muffler-type hold. 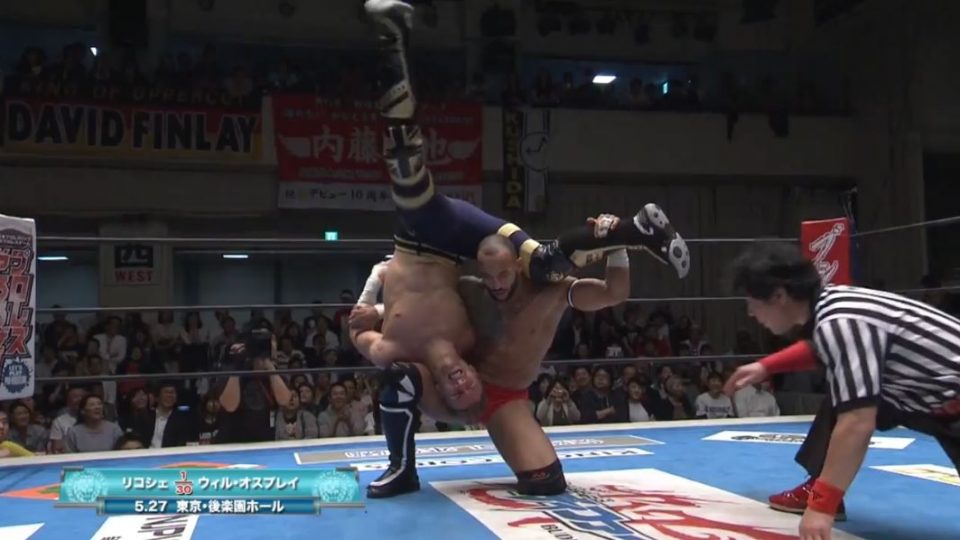 Ricochet charges into a corner and the two wrestlers block each other until Ospreay lands another enzuigiri. He follows with a springboard forearm and Ricochet falls to the floor. Ospreay follows with a corkscrew Sasuke special, flipping over the top rope and spinning down to the floor. He tosses Ricochet into the ring and lands a springboard sunset flip powerbomb for two. Ospreay teases another flippy move but Ricochet pulls him back. Ricochet goes to the ropes and flips but goes over Ospreay’s shoulders, ducks a clothesline, and lands a massive spinkick. Ricochet follows with a snap Regal-plex and pins for two.

Ricochet lifts Ospreay onto his shoulders but Ospreay escapes and the two wrestlers trade strikes again. Ricochet pump kicks Ospreay into a corner and charges but Ospreay blocks and goes for his ‘Cheeky Nandos’ through-the-legs superkick but Ospreay kicks him first. Both men flip over each other from the second rope, dodge some sweeps, and kick each other simultaneously. The audience cheers loudly as both guys collapse.

The crowd chants ‘this is awesome’ (weird for a Japanese crowd, but whatever) as both wrestlers get up on the apron. They trade strikes once again until Ospreay charges. But he runs into a Death Valley Bomb right onto the apron. Ricochet tries to throw him back into the ring. Ospreay slides over the apron onto Ricochet’s shoulders and lands a poisoned Frankensteiner. Ricochet gets spiked and both wrestlers go down again. The referee begins his count. Both men barely make it in at 19.5 (I call BS there. Ricochet was dead at 19 and somehow jumped up and got into the ring in less than a second). Both men make it to their feet and trade stiff strong-style strikes. Back-and-forth they go with forearms and uppercuts until Ospreay lands a head-butt. Ospreay charges but turns into a forearm. Ricochet goes for a fireman’s carry kick but Ospreay ducks and lands another enzuigiri. Ospreay tries a Rainmaker. Ricochet dodges and lands a northern lights suplex. He floats over into a vertical one but Ospreay counters with a stunner. He charges again. Ricochet lands a pump kick and goes back to the ropes. Ospreay counters with a standing Spanish Fly. One, two, Ricochet kicks out.

Ospreay gets up first and signals the end. He goes to the ropes for his springboard Os-Cutter but Ricochet catches him and lands a Blue Thunder Bomb and a bicycle knee. Ricochet follows with a northern lights suplex into a Brainbuster. Standing shooting star splash. Ospreay kicks out. 630 splash from the top rope…misses. Ricochet counters a charge with another suplex attempt. Ospreay counters with a cradle that gets two. Frustrated, Ospreay starts kicking Ricochet’s head. Ricochet slaps back, so Ospreay kicks his head in. he goes to the ropes. Os – no, Ricochet goes for the fireman’s carry kick. Wait, no, Ospreay blocks and lands a corkscrew kick of his own. Springboard Os-Cutter connects. One, two, three! Ospreay wins!

There are two kinds of wrestling fans: those like to see wrestling and those that like to see wrestling moves. Those two things are not one in the same, as seen with this match. This match really did live up to the hype, but not entirely in a good way. It really was, and still is, one of the most indy matches ever, and to be honest, I can see why it’s still such a polarizing contest.

This match basically took the concept of pro-wrestling and dragged it kicking and screaming off to one side and let key elements fall off as it did. This was a pure spot-fest match with precious little in terms of psychology or structure. In fact, it almost came across as a checklist for the kind of self-indulgent ‘OMG CRAZY MOVEZ’ style of wrestling that became popular in the mid-to-late 2010s. Let’s see if this match checked all those boxes off:

Was there anything good here? Well, technically yes, because the crowd was entertained and very loud for the entire match. And yet, I got the clear impression that I was watching one of those NXT matches where the crowd chants random stuff for the sake of being heard. Still, they loved watching Ricochet and Ospreay pull off some daredevil stuff. So, at the very least, Ospreay and Ricochet got the crowd behind them and managed to use that to make this match (a bit) better.

Plus, as I said earlier, the match was poor when it came to wrestling but was good when it came to the execution of wrestling moves. If all you’re interested in seeing is ‘boom, boom, boom, maneuver, maneuver, maneuver, all nonstop, no rhyme or reason behind it’, then this match delivered and then some. While that might appeal to some fans, there are other matches out there that deliver better in terms of crazy spots and ‘can-you-top-this’ insanity.

I went into this match with a blank slate and decided to see what all the fuss was about. And after watching it, I totally understand why it got so much hate. Ricochet and Ospreay didn’t actually put on a wrestling match, per se. What they did was they cosplayed as wrestlers and pretended they were video game characters spamming moves without telling much of a story. And since no one was there to reign in the silliness, both wrestlers went to the extreme in trying to put on a very niche style of match that takes the phrase ‘pro-wrestling is fake’ and makes it as blatant as humanly possible.

It’s a shame. Both Ricochet and Ospreay were and are capable of so much more than this. Ricochet has languished in WWE for years now, underutilized and underappreciated as the company lets his talents and ability to flip gravity the bird go do waste. Meanwhile, Ospreay has been trying to convince people he belongs in the heavyweight division, but considering how he wrestles, I’d have an easier time convincing you that Rey Mysterio never did anything special.

Who’s to say where either wrestler’s career will go from here. Maybe Ospreay will regain his IWGP World Heavyweight title that he never lost at the next Wrestle Kingdom in January. And maybe, after surviving so many releases, Ricochet will actually get a decent push on RAW. Whatever happens, for the sake of their respective careers, I just hope that neither wrestler wrestles in as silly a way as they did here.