It has been a while since I reviewed a lucha match that didn’t involve Rey Mysterio. But apparently, this is one of the greatest lucha libre wrestling bouts in history, if not the greatest. In fact, it was so great that it won the Wrestling Observer Newsletter’s Match of the Year in 2000. I bring that up because of what that implies.

This match was voted as the best match of the year in a year when WWE was quite possibly at its best ever. The year 2000 brought us many classics including the Cactus/Triple H Street Fight, TLC I, Triple H/Jericho at Fully Loaded, a hidden classic All Japan/New Japan tag match, twogreat matches involving Jun Akiyama, and so much more.

But was it really that great? And does it still live up to the hype over twenty years later? Let’s find out.

Today we revisit the mask vs. mask match between CMLL’s Atlantis and Villano III from the Juicio Final PPV in 2000.

This is a dream match between two of the biggest wrestlers in Mexico at the time. On one side was Atlantis, who was a seventeen-year veteran at the time. Atlantis was a John Cena-like babyface that was portrayed as an idol to children. Even during his brief stint as a heel, kids looked up to and admired him. He also boasts an extensive collection of championships and accolades, having won numerous singles titles, tag titles, and tournaments.

On the other side was Villano III, one of five brothers to use the Villano name in the ring. But out of all of them, he was the most successful by far. Unlike most of his fellow luchadors who focused on pure high-flying spectacle and dazzling moves, this Villano preferred hitting realistic moves and locking quick pins that could end a match out of nowhere. That distinct style of his made him something like The Undertaker of wager matches. Going into this match, Villano was a 30-year veteran that had a perfect 58-0 winning streak in mask wager matches.

In simpler terms, this was akin to The Undertaker vs. John Cena at WrestleMania except both men are still in their primes and are given as much time as they needed to have a competitive match. But could it live up to such lofty expectations? 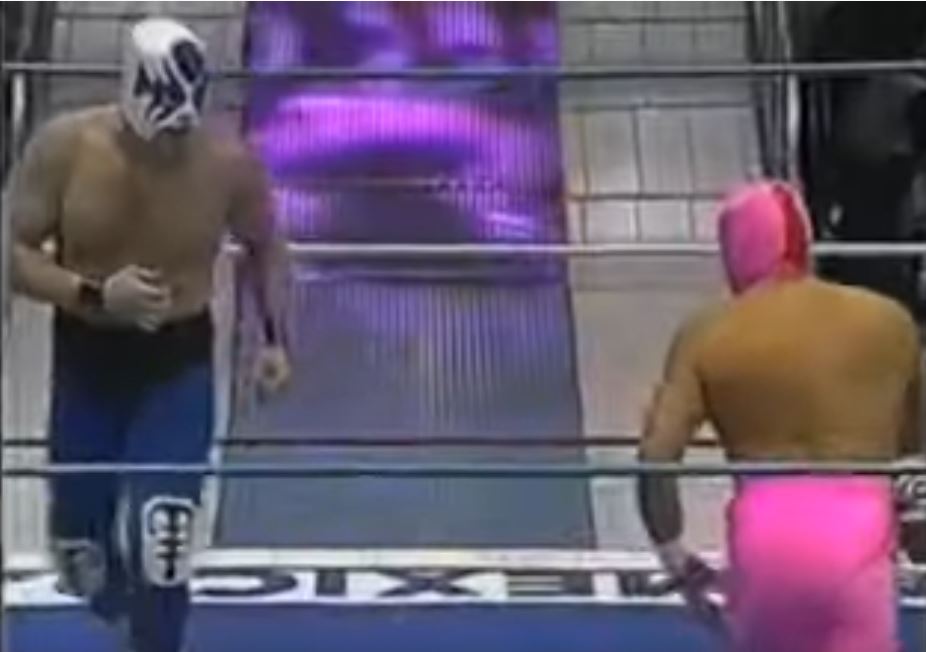 This match originally took place on March 17th, 2000, at a CMLL event called Juicio Final, or ‘Final Judgment’. It was originally rated ****3/4 out of five by the Wrestling Observer’s Dave Meltzer, and his publication’s readers voted it as the Match of the Year for 2000. It was also called “the biggest apuesta (wager) match of the decade.” I’m not sure if that meant the 1990s and ending in 2000, or for the 2000s. Anyways, let’s see how well it holds up now.

This is a lucha de apuestas, or wager match, with no time limit. Whoever loses must unmask and is forbidden from ever wrestling under their mask again. Villano is the heel in pink while Atlantis is the face in blue.

They spend the first few minutes arguing with the referees until everyone but the combatants and one ref are sent backstage. They open with some matwork and basic arm holds. Atlantis keeps Villano grounded until Villano counters with a headscissor takedown. Atlantis escapes but Villano takes him down by his arm, and even though Atlantis gets an almost-instant ropebreak, Villano milks the hold as much as he can before letting go.

Villano gets into a shoving match with Atlantis and start ripping off his mask. Atlantis gets clotheslined out of the ring and Villano runs to the ropes. Big suicide dive. Both men collapse. The referee calls for a doctor to check on them as both guys appear to be bleeding. The camera pans to the crowd to avoid showing Atlantis’s face and a reply shows them headbutting each other on the dive. Ouch. Atlantis returns to the ring as Villano struggles to his feet, his pink mask turning crimson. He hits some knees to Atlantis’s face on the apron and lands a head-butt, but hurts himself in the process. Atlantis takes advantage and suplexes Villano over the rope and into the ring. He carries Villano towards the ring and…wait, Villano counters with a cradle. One two, Atlantis kicks out.

Atlantis runs towards Villano and lands a perfect hurricanrana for two. He dropkicks Villano to the floor and goes to the top rope. Diving plancha connects. In the ring, Atlantis pins but only gets two so he charges at Villano. But Villano blocks and applies an octopus stretch. Atlantis counters with a stretch muffler-type hold and tries to pin at the same time. Villano is forced onto one shoulder or to bridge with his neck, putting more and more pressure on him as time goes on. Suddenly, he manages to flip over into a sunset flip and gets another two-count. Atlantis gets up first and tries another hurricanrana. Villano counters into a pin of his own. One, two, Atlantis kicks out. Villano sends Atlantis into the ropes. Atlantis counters with a Gory Special submission hold. The crowd goes nuts. Villano counters again with another sunset flip that gets two. He follows with a clothesline/leg drop/senton combo and signals the end. He goes for a butterfly stretch. Atlantis counters with a cradle that gets two. Villano charges…and walks into an Atlantida Backbreaker/Torture rack. Villano escapes and hits another running clothesline. He goes for another but Atlantis ducks and hits a dropkick. He goes for one more. Atlantis counters with the Atlantida. Atlantis drops to his knees with Villano on his shoulders. Villano taps out. The crowd explodes!

Post-match, Atlantis gets a huge celebration for his win and hugs his friends. Then, Villano gets the crowd’s attention and tries to get them to keep cheering Atlantis, but they cheer him just as much. Villano picks a small child (who I think is his son) onto his shoulders as he cuts a post-match promo about his love of wrestling. As he speaks, the camera cuts to the crowd and several people are openly weeping. He accepts being unmasked and vows to continue wrestling. he reveals his real name for the first time and says some more optimistic words. Atlantis gets some words in next and cuts a promo on how tough a match he just had.

That was a solid yet disappointing match. Even though it had a white-hot crowd and some smooth technical wrestling, there was something off about this match. It had the action, it had the crowd, and it had some semblance of a story. But there was a fatal flaw in how this match was executed: nothing felt like it mattered until the very end.

Despite the great backstory and the historical significance of mask wager matches in general, this match lacked, well, heat. This was supposed to be something extremely serious, akin to a life-altering change for the loser. But the wrestling didn’t convey that severity. Aside from a blink-and-you’ll-miss-it strike exchange, the match followed a ‘my-turn-your-turn’ structure that made it look more of a cooperative endeavor than a competitive one. As such, it was hard to follow the match’s story that well. It was hard to tell who was supposed to be the villain considering both wrestlers wrestled in a similar style and with little nuance or character work. That was worsened by the fact that the crowd reacted strangely through most of the match. Neither wrestler was really booed, even though Villano was supposed to be the heel (his name does mean ‘villain’ after all); so even though there was supposed to be a clear face/heel dynamic, both wrestlers basically wrestled like babyfaces and the one ‘heelish’ moment in the match was met with either cheers or apathy.

The match’s heat and intensity were also hampered by some inconsistent selling, which in turn made the match feel slower and more plodding. Villano locked in one submission hold after anotherat one point and Atlantis did the same after landing a big dive to the floor. Yet neither wrestler really sold any of those moves. Nothing really mattered until the very end. There was little build up to the finish, if any. Atlantis’s torture rack came out of nowhere and ended the match in a way that rendered pretty much everything leading up to it moot.

It was hard to follow the action at times throughout the match. Not because of anything the wrestlers did; both of them were smooth and had great timing. No, the problem was the poorly-times camera cuts to the crowd. There were a few that made sense while both were being checked out by the doctor following the botched dive/head-butt. But the rest interrupted the flow of the match. You’d be watching the wrestling, engrossed in what’s going on and then, BAM, a quick cut to a random fan watching. Then it would cut back to the ring and either some big move would be missed or we’d only see half of a big sequence. Maybe it was better live but that sort of bad editing makes it hard to really immerse one’s self in a match like this.

The only strong point about this match aside from some good action here and there was the crowd. When it was time for the near-falls and submission holds, they went absolutely crazy. They genuinely believed that any of those moves could’ve ended the match and reacted accordingly. And when the finish came, they erupted in cheers for Atlantis and then gave Villano a heroes send-off. So at least they showed how to get a genuine and emotional reaction from the crowd, which was refreshing since such reactions are so hard to come by these days.

This match just didn’t live up to the hype. These sorts of wager matches are supposed to be the most serious of all stipulations. While the crowd gave that impression, the wrestlers didn’t. There was little heat and the match’s storytelling was threadbare. It had some cool moves, but spamming cool moves does not a classic match make.

I get it; this is lucha libre, which is different from the wrestling most of us are used to. And yet, I’ve seen lucha matches before in which the action is complemented by actual heat and clearly-defined characters with opposing motivations. That wasn’t shown here; the match came across as an exhibition between two masked guys competing not for their sacred masks but for the crowd’s adulation.

I wish I could say this was better but sadly it’s simply disappointing.