The two Elimination Chamber matches at No Way Out 2009 were for the two major titles that existed in WWE during the original brand extension.

The opener of the show saw Triple H leave with the WWE Championship. That match featured the Smackdown roster.

In the main event of No Way Out 2009, the World Heavyweight Champion John Cena was set to defend the gold against five of Raw’s biggest names. What we didn’t know at the time was that a major twist would take place in the match. Let’s get to it.

WWE No Way Out
February 15, 2009
Key Arena in Seattle, Washington

The Elimination Chamber lowered. It was noted by Michael Cole that 67% of the time a title was on the line in a Chamber match, the title changed hands.

John Cena made his entrance with the World Heavyweight Championship in his hands with Cole noting that he’ll be locked in one of those Lexan pod chambers. Mike Knox was up next. I don’t even remember him being in this match. Knox was part of the ECW reboot in 2006 and then later pushed on the main roster as a menacing heel. Kane was the third man that will enter one of the pods to start the match. He was in his heel run without a mask on.

Kofi Kingston entered as the fourth man to enter a pod. He was a new guy that was gaining a lot of popularity, but then Edge showed up with an attack from behind! Edge slammed Kingston into the steel steps. Edge grabbed a steel chair and did a Conchairto chair shot to the head of Kingston against the steel steps. Edge entered one of the pods. Rey Mysterio ran out to check on Kingston. The medical personnel checked on Kingston. Edge locked himself in one of the pods as Mysterio went after him, but Mysterio couldn’t get to him.

Chris Jericho entered as the last man. He was in his “best in the world” heel persona at this point. It was the best run of his career and this was Jericho’s 5th Chamber match. Kingston was helped to the back. The refs locked the chamber up to allow Edge in the match. 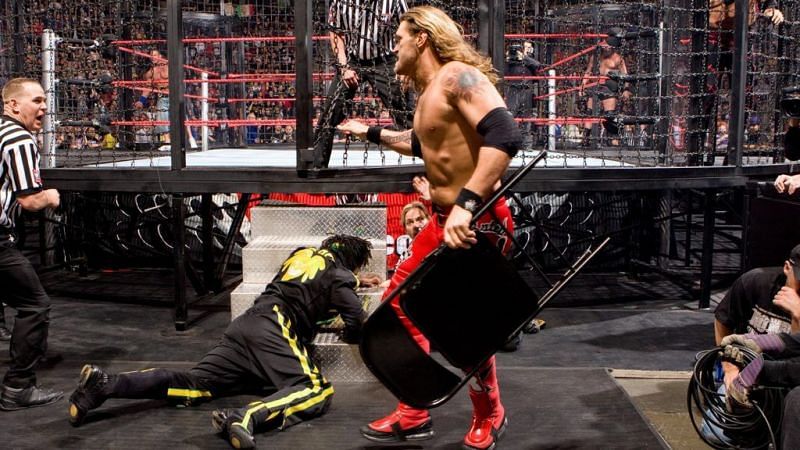 Analysis: The attack by Edge was a huge surprise that nobody could have predicted. Technically, Edge was a Smackdown guy that was just mad about his loss earlier in the night and he was allowed to be in the match.

Elimination Chamber Match for the World Heavyweight Title: John Cena vs. Mike Knox vs. Kane vs. Edge vs. Chris Jericho vs. Rey Mysterio

Pre-match notes: John Cena was the face World Champion with Mysterio as the other face in the match. The heels were Jericho, Knox, Kane and the replacement Edge.

The announcers are Michael Cole and Jerry Lawler.

It’s Kane at #3 with a boot for Mysterio and a clothesline for Jericho. Kane with a sidewalk slam on Mysterio for a two count. Kane with a running dropkick on Mysterio got a two count. Kane worked over Jericho with punches followed by a clothesline that sent Jericho onto the steel. Kane rammed Jericho’s knee into the steel. Mysterio with a baseball slide dropkick on Kane. Punches by Kane on Rey. Mysterio came back with a flipping neckbreaker in the ring. Kane avoided a Lionsault by Jericho and kicked him down. Mysterio with a headscissors on Kane followed by a 619 and Jericho hit Kane with a Codebreaker. Mysterio took Jericho out of the ring. Mysterio went up to the top of a pod and hit a Seated Senton on Kane leading to a pinfall to get rid of Kane. The clock ticked down from there.

Analysis: That was an impressive leap by Mysterio and Kane sold it great.

Mike Knox is #4 in the match with kicks for Mysterio and Jericho followed by a corner splash on Mysterio. Knox with a body slam on Jericho and a knee drop. Knox stomped on Mysterio to keep him down. Jericho with a back body drop sent Knox over the top onto the steel. Knox caught Jericho and drove him back first into the cage. Mysterio tried an attack, but Knox sent Mysterio into the cage as well. Knox hooked Mysterio’s foot between the chain links and pounded on Rey. Knox tossed Jericho back in the ring. Knox with a backbreaker on Mysterio. Jericho hit a Codebreaker out of nowhere and pinned Knox to eliminate him. Knox was in the match for just under five minutes as the clock ticked down again.

Analysis: In terms of star power, Knox was by far the lowest on the totem pole in this match. It’s not a surprise that he had a short run. Knox was on offense the entire time until he ate that Codebreaker to lose the match.

Edge was the 5th entrant in the match with Mysterio going after him with punches. Mysterio with a springboard cross body block on Edge. Jericho decked Mysterio with a hard clothesline. Jericho hit the bulldog on Edge. Mysterio charged at Jericho and Jericho hit a back elbow. Edge took down Jericho with a neckbreaker for two. Edge sent Mysterio into the turnbuckle, but didn’t connect and Mysterio wanted a 619 on Edge only for Jericho to deck Mysterio with a shoulder tackle. The three men did a spot out of the corner where Jericho did a sunset flip on Edge, who hit a German Suplex on Mysterio, so it was like a Tower of Doom spot out of the corner. Edge tossed Jericho over the top rope causing him to go crashing onto the steel.

John Cena is #6 with the crowd going wild for him. Cena with shoulder tackles for Edge, clothesline for Jericho and a belly to belly suplex. Cena with a bulldog on Edge and he tossed Jericho onto the cage. Cena with a spinning suplex on Edge. Cena hit the fist drop on Edge. When Cena went for the AA on Edge, Jericho hit a Codebreaker on Cena. Mysterio hit a 619 on Cena and Cena stumbled right into the Spear from Edge for the pinfall loss. Cena is out of the match after just 2:22 of action.

Analysis: That was a huge surprise since Cena was obviously “the man” in WWE at this point, so to see him barely last in the match was a big surprise. Three signature moves in a row was a great way to get rid of Cena.

The crowd let out a big reaction to that with a mix of cheers and boos. Edge had a great facial expression to celebrate it. Mysterio nailed Edge with a dropkick followed by a headscissors on Jericho. Mysterio dropkick on Jericho. Mysterio hit the 619 on Jericho end Edge missed a charge on Mysterio. Mysterio countered a Walls of Jericho attempt and rolled up Jericho while sitting on top to eliminate Jericho.

Analysis: That was a creative counter by Mysterio. Rey and Chris had amazing chemistry together. They had a great rivalry later in 2009 along with some great matches in WCW as well.

Edge set up for a Spear, took way too long and Mysterio avoided it leading to a rollup for two. The crowd thought that was it. Fans chanted “Rey” as he hit a cross body block on Edge for a two count. The fans bought that as a potential finish too. Mysterio countered a rollup attempt from Edge and nailed a kick to the head for two. Mysterio countered another Edge move with a DDT for a two count. The crowd bought that nearfall as a potential finish as well. Edge came back with a big boot that knocked down Mysterio on the steel outside the ring. Edge tried a Powerbomb on the steel, but Mysterio countered with an X-Factor facebuster. Mysterio with a reverse 619 to the back of Edge’s head instead of the front. Mysterio charged in, but Edge launched him over his head and sent Mysterio into the glass pod. Ouch. When Mysterio stumbled back into the ring, Edge hit a Spear. Edge covered Mysterio and the ref counted the three to give Edge the victory after 29:46 of action.

Analysis: **** It was a pretty good match that was a lot of fun in the second half thanks to the work of Edge, Mysterio and Jericho. The first half of the match was not as interesting, but still interesting with Mysterio and Jericho telling an interesting story. The elimination of Cena was a huge story in the match because most people assumed Cena was going to win, so to see him get eliminated in under three minutes was a huge shock. It was almost as big of a shock as Edge being inserted into the match. There wasn’t much of a role for Kane or Mike Knox in the match. They are big guys, but neither guy was much of a factor in there. I liked the way Mysterio came close to beating Edge multiple times and the story became about whether Mysterio could find a way to do it. They ended the match in an emphatic way with Edge launching Mysterio into the glass covering the pod and using the Spear to end it. I like how it was booked.

Analysis: What ended up happening was Triple H took the WWE Title to Raw due to Randy Orton’s feud with the McMahon Family. Edge defended the World Title against John Cena and Big Show at WrestleMania 25 with Cena winning it back. Edge got it back a few weeks later at Backlash due to Show interfering. Edge lost the title again this time to Jeff Hardy a few months after that. It was a period where WWE loved booking title changes.

The big question from the match would be this: If Edge was not legally in the match, why was he able to take part in it? Because it’s WWE. They don’t explain things well. That’s my answer. 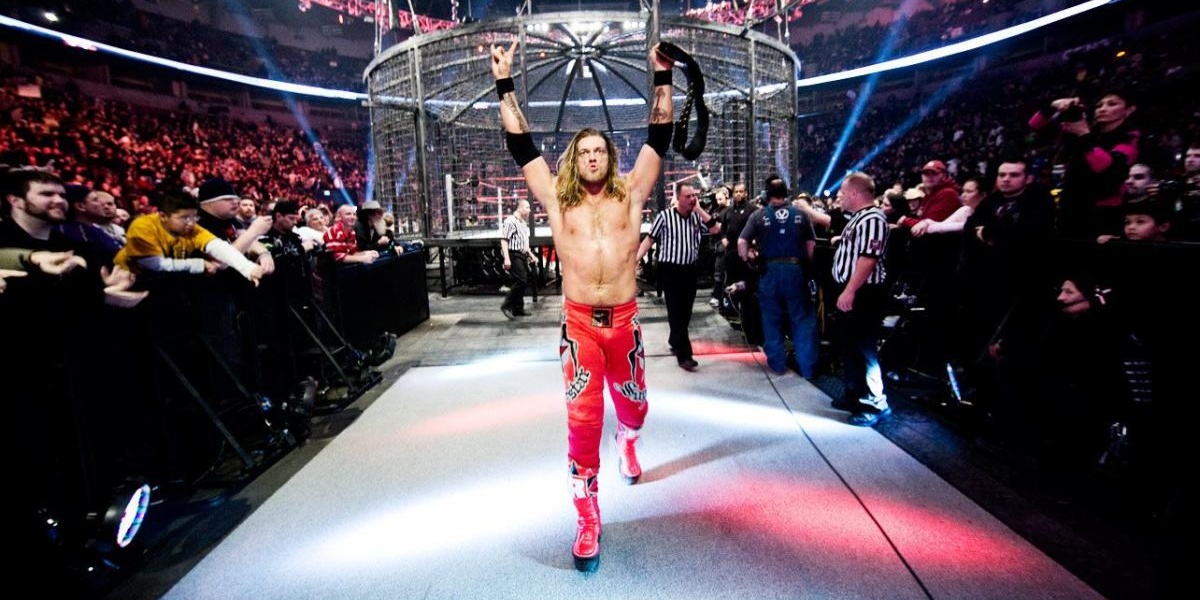 – I liked the story of the match a lot with Edge forcing his way into it and finding a way to win. It was so cheap, yet when he got in there he played within the rules and when he left with the title, it got people talking in terms of what might be next. Could it have been explained better? Of course. As we all know, WWE is not very good at explaining logic or a lack of logic.

– The key part of the match was Cena’s elimination. Cena is always the favorite in his matches, so to have him get his minute of offense in there and then succumb to three signature spots in a row was an incredible story. The fans were stunned by it. There was this long, sustained reaction to it that showed how much of a big star Cena was.

– Poor Kofi Kingston. I remember people thinking this could be a breakout match for him in a main event spot, but then he was taken out of it.

Wrestler that lasted the longest: Rey Mysterio at 29:46.

Most Eliminations: Edge and Mysterio with two.

Best Performers (3): Rey Mysterio – Rey is such a great worker. He was the key to the match.

Chris Jericho – He competed in more Chamber matches than anybody. This was during one of the best runs of his career and as usual, he did well.

Most Memorable Moment: John Cena being eliminated in 2:22 due to the Codebreaker, 619 and Spear combination. It was shocking.