Welcome to another AEW Dynamite review here on TJRWrestling. This will be an abbreviated review because I’m exhausted after having a stressful couple of days, been doing a construction project at home that takes up a lot of time and frankly I’m burnt out a bit from writing. I have less help than ever on TJRWrestling, which adds to the stress of daily life. I want help, but it’s hard to find. If you want to help, check out this page for more info. I’m not going to rate the matches with star ratings or have final thoughts with a score out of ten. I’m just posting the match results and key segment recaps with thoughts on them. I should be back to normal for next week’s show review.

This is episode #56 of AEW Dynamite from Daily’s Place in Jacksonville, FL. Follow me on Twitter @johnreport. Here’s my AEW Dynamite TV review archive. Let’s get to it.

I’m reading the results off of AEW’s website and got match times from Rajah.com.

An opening match with a finish that everybody could see coming. While Wardlow has been booked strong in AEW with only one loss coming into this match, it was obvious that Page was going to win. I caught the finish with Page hitting the Buckshot Lariat twice to win, which puts over Wardlow because most guys will lose after taking that move once.

It was a win for Kingston in under eight minutes using the Bulldog Choke that Jon Moxley has used in the past. Simple booking to give Eddie a win before his AEW World Title shot. Sydal is very talented, but not really featured in AEW yet.

The Young Bucks and FTR did a sitdown interview with Excalibur. After FTR left the interview, The Young Bucks said that if they don’t win the Tag Team Titles at Full Gear then they’ll never challenge for the titles again. That’s interesting. I would have predicted FTR to retain at Full Gear, but I’m not sure now.

There was an Inner Circle Town Hall meeting about MJF wanting to join Chris Jericho’s Inner Circle group. I’m sure there was a lot of tongue in cheek humor throughout this segment. Eric Bischoff was also part of the segment, so it’s the second time he has been on AEW Dynamite. Anyway, all of this led to a deal where Jericho said that if MJF can beat Jericho in a match at Full Gear then MJF gets to join the group. There was also some arguments among guys in the Inner Circle group that didn’t want MJF to be a part of it.

Cody won this match after some interference, so I guess it was done to protect Cassidy. This was Cassidy’s third shot at the title, the last time it ended in a draw and the previous time was against Brodie Lee. Anyway, Cody found a way to retain in what was just an average match.

Later in the show, it was announced that Cassidy will face John Silver of the Dark Order because of repeated attacks. That’s on the pre-show. Cassidy went from a major feud with Chris Jericho that Cassidy won at the last PPV to wrestling on the pre-show against a jobber on the next PPV. That’s not how you build a “new” star.

Miro and Kip Sabian beat up Best Friends in a backstage segment. They’re still mad about a video game being broken. What a riveting feud that is.

This was the only women’s match of the show and it went about eight minutes. Typical AEW women’s match with no story, so they just go out there and do their best in the time given. Serena is an awesome worker, so I’m glad that she’s being featured more. No surprise that she won.

They announced Hikaru Shida defending the AEW Women’s Title against former champion Nyla Rose at Full Gear. I have written for weeks that they need to get the title on Britt Baker. I don’t even remember the last time Rose had a match on Dynamite, yet she’s getting another title shot. That’s nothing against Rose, who is a good heel. I’m just saying the booking is poor in regards to the women’s division.

The match was over in about 30 seconds.

After the match, Scorpio Sky was dressed in a Halloween costume. He attacked Spears and hit him with a TKO.

Next week live on Dynamite on my birthday, November 4:

* Sammy Guevara and Ortiz vs. MJF and Wardlow

That’s not a very strong lineup, but I would expect a lot of talking as well due to it being the last show before Full Gear.

I heard this match was great, so I checked it out and it was probably **** out of five if you want my rating for it. While it was obviously going to be a win for Omega, he gave a lot of offense to Penta, who he has wrestled many times and they had an exciting match. I’ve seen them wrestle before as well. They kept on teasing the One Winged Angel for Omega with Penta fighting out of it for as long as he could, but once Kenny hit the move you knew it was over because that’s a move nobody kicks out of. It’s always going to be good when Kenny faces Penta although I would have loved to see Rey Fenix against Kenny if Fenix wasn’t injured. Hopefully they can do that match soon. They got about 17 minutes, which may have been a bit longer than needed for a match with a predictable result, but we know AEW is going to give a lot of time to the main event and that’s a good thing in general.

The win for Omega means he will face former tag team championship partner “Hangman” Adam Page at Full Gear on November 7. The winner of that match gets a future shot at the AEW World Champion. If you thought that the finals would be anything other than that then you haven’t watched enough wrestling tournaments in your life. Believe me, I’m not complaining. It’s the right match to do.

It’s not a surprise that Omega and Page won their matches while Cody retained his title. The Jericho/MJF segment set up their first match against eachother, which should be interesting just to see how it’s booked. There wasn’t much regarding the AEW World Title feud between Moxley and Kingston, but that should be more of a focus next week on the go-home show before Full Gear.

I really like the Full Gear lineup. I think it will be better than the All Out PPV from two months ago.

The next AEW PPV is Full Gear on Saturday, November 7. Here’s what we know so far. 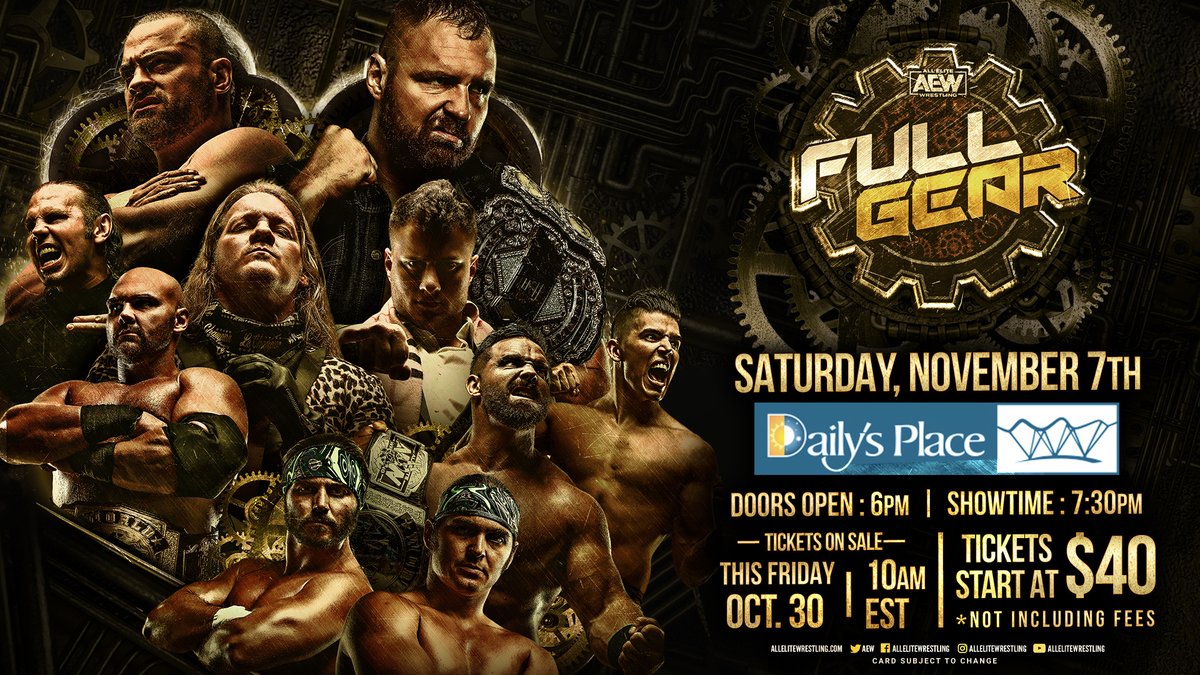