There was a bit of a surprise finish to the Men’s Money in the Bank ladder match last night when Otis won the contract. AJ Styles and King Corbin were battling on top of the ladder with each man holding the Money in the Bank briefcase when Elias showed up with a guitar and he hit Corbin in the back with it as payback for Corbin’s vicious attack on him. Styles ended up fumbling the briefcase out of his hands and it landed into the hands of Otis, who was standing in the ring. Earlier in the match, Otis was unable to climb the ladder because he was too heavy, so Otis got the fluke win by catching the briefcase even though he didn’t climb the ladder.

What does this mean for Otis now? Is he going after the WWE Champion Drew McIntyre or Universal Champion Braun Strowman? Apparently not because Otis is a part of the Heavy Machinery tag team with his buddy Tucker, so perhaps that’s the direction.

In an interview with Digital Spy prior to Money in the Bank, Otis said this:

“If I get the briefcase, we’re challenging for the Tag Team titles. I don’t think there’s a rule of what titles to challenge for, so we’re going to challenge for the Tag Team titles, cash it in and that’s what’s going to happen… if I can get up that ladder. I’m a little scared of heights. And I hope that ladder’s going to be sturdy enough to carry my weight.”

This interview was likely done in the last week while the Money in the Bank match was taped around four weeks ago. It’s not known if Otis said that he was going for the Tag Team Titles because that’s what WWE told him to say as far as his storyline direction or if it’s just him speaking in character.

AJ Styles tweeted this about what happened.

No one has heard from @WWEAleister or @reymysterio, @BaronCorbinWWE is running from the law, @WWEDanielBryan is still rearranging furniture in the office, and I was CHEATED out of #MITB by @otiswwe! A travesty! #WWERaw

Perhaps they could do Styles vs. Otis for the briefcase even though Styles is on Raw and Otis is on Smackdown, but I don’t know if that’s going to be the direction.

There’s no word on what Asuka is going to do with the briefcase because she was in a tag team with Kairi Sane. It has been promoted by WWE that Becky Lynch is calling out the Money in the Bank winner, who is Asuka, so maybe they’ll have a title match soon, but in theory Asuka has a full year to cash in. 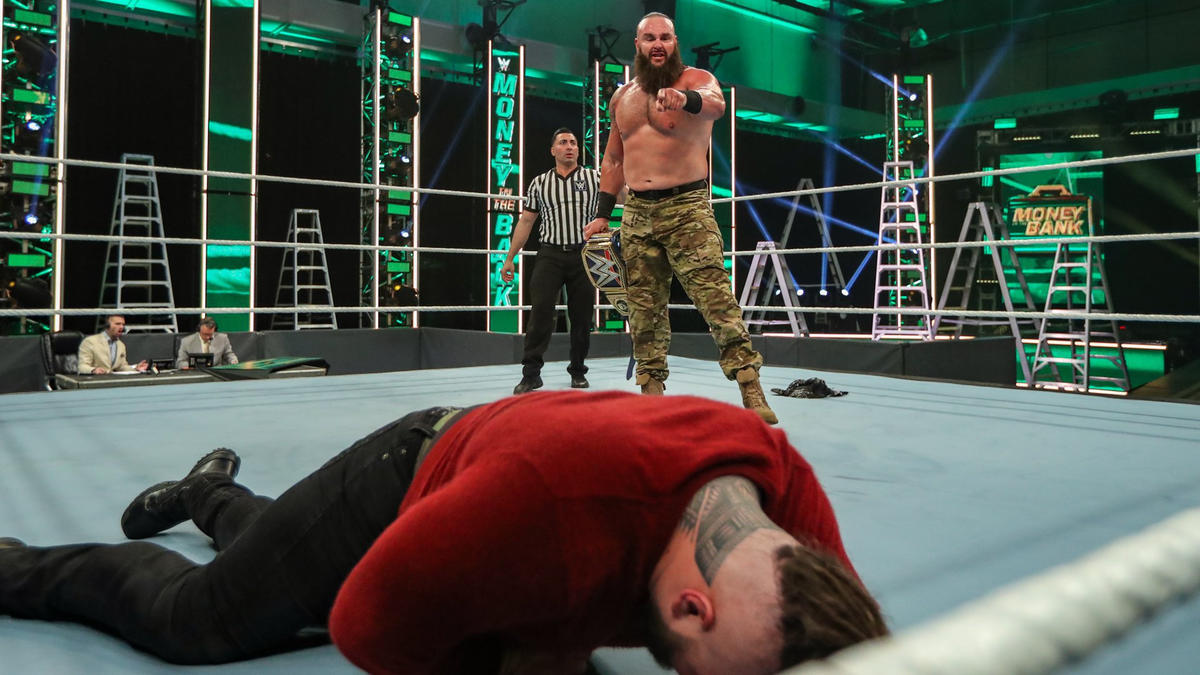 Most of the matches that took place at the WWE Performance Center last night were live. During those matches, you may have noticed that WWE put the word “LIVE” in the upper right part of the screen.

For the Braun Strowman match against Bray Wyatt, there was no “LIVE” in the upper right corner.

According to Paul Davis of WrestlingNews.co there was a reason for not going live. Davis wrote: “WWE taped the Bray Wyatt vs. Braun Strowman match in advance. The reason for this was that they didn’t want to risk accidentally showing the puppeteers on camera when Bray’s puppets appeared during the match.”

That makes sense. If you saw the match then you know that Bray Wyatt’s puppets appeared at ringside when Braun teased that he was going to align with Bray.

Anyway, that’s some info from last night’s Money in the Bank event.