There were two big matches added to the WWE Crown Jewel PPV lineup during this week’s edition of Raw. Former WWE Champion Drew McIntyre will challenge the current WWE Champion Big E in a singles match while Bobby Lashley will face his SummerSlam opponent one more time in a No Holds Barred Match.

Big E did a promo on Raw talking about his big Steel Cage Match win over Bobby Lashley on last week’s Raw. Big E noted that after his match, he had a face off with another man that wanted a shot at his WWE Title, Drew McIntyre. After Big E called him out, McIntyre congratulated Big E on becoming WWE Champion, Drew said that Big E deserved it and the two top babyfaces shook hands. Drew challenged Big E to a WWE Title match. Before Big E could answer, they were interrupted by Dolph Ziggler and Robert Roode.

Ziggler wanted Big E and McIntyre to thank him because both guys were associated with Ziggler earlier in their careers before they became WWE Champions. Ziggler made his comments in an obnoxious way as usual, so that led to a tag team match. The team of McIntyre and Big E got the win over Ziggler and Roode with McIntyre getting the pinfall after a Claymore Kick. Post match, Big E hit Roode with a Big Ending. After that, Big E told McIntyre they should have their WWE Title match at Crown Jewel, McIntyre agreed and it was made official.

In the WWE Draft, Big E was drafted to Raw and McIntyre was drafted to Smackdown. The newly drafted rosters do not take effect until after Crown Jewel on October 22.

Another big match was added to Crown Jewel when Bill Goldberg went to the ring to call out Bobby Lashley. Goldberg didn’t believe Lashley saying that what Lashley did to Goldberg’s son (putting him in the Hurt Lock) was a misunderstanding because Goldberg believed it was intentional. Lashley said that Goldberg has been perpetuating this myth that Lashley hurt Goldberg’s son on purpose and Lashley said that Goldberg owes him an apology. Lashley said he’ll give Goldberg a match, but said that the match is No Holds Barred. Goldberg told Lashley that No Holds Barred gives him a license to kill. Goldberg said Lashley thinks Goldberg is crazy and he is. Goldberg told Lashley he’ll apologize to Lashley’s kids for leaving his lifeless body in the ring. Goldberg ended it by saying: “You’re next and you’re dead.”

Goldberg was attacked from behind by Lashley’s Hurt Business buddies Shelton Benjamin and Cedric Alexander. They didn’t have much success, though, because Goldberg beat them up easily and hit a Spear on Benjamin. The Lashley/Goldberg match was made official by WWE.

The updated WWE Crown Jewel lineup from Riyadh, Saudi Arabia looks like this. 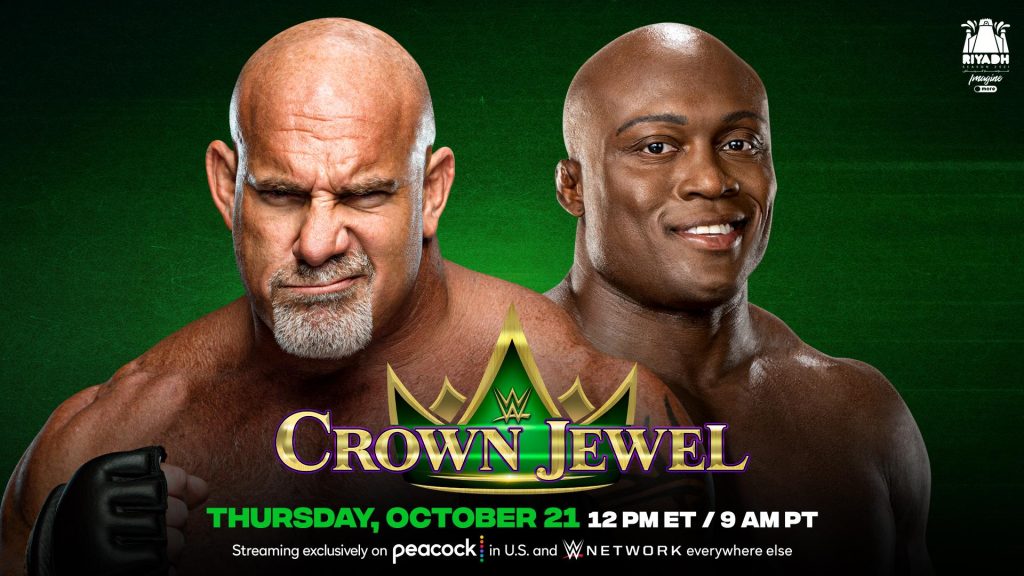 WWE Crown Jewel is live on Thursday, October 21, at 12 p.m. ET/9 a.m. PT on Peacock in the United States and WWE Network everywhere else.